Remember Who We Are 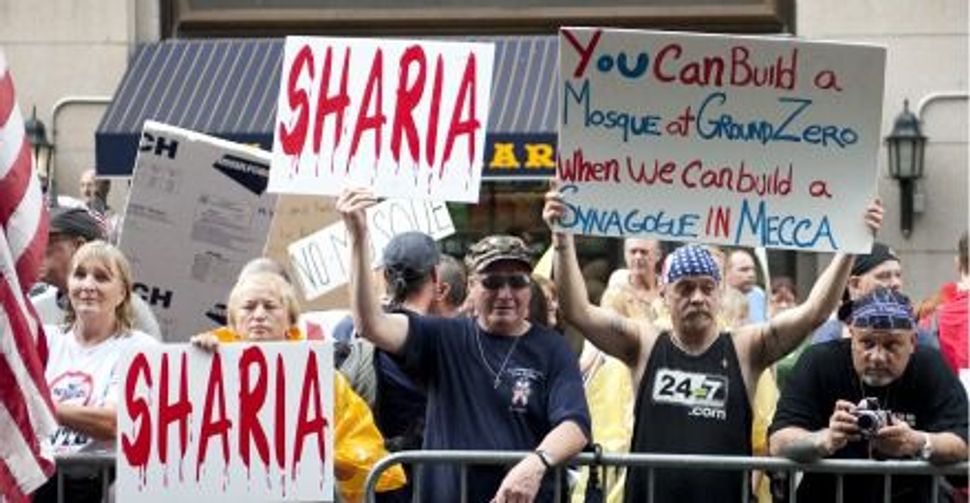 When Amy Waldman was writing her engrossing new novel, “The Submission,” premised on a Muslim winning the competition to design a memorial at the World Trade Center site, she wondered if her depiction of the uproar and violence by opponents of the design would ring true. That was before plans to build an Islamic cultural center near the site ignited anti-Muslim hysteria across the country. “After that, I realized I was right,” she told the Forward. “The lack of trust was that deep.”

What holds in good fiction is true in life. Trust is still a scarce commodity, ten years after the terrorist attacks left thousands dead in New York, northern Virginia and Shanksville, Pennsylvania. Trust in the democratic and patriotic intentions of the Muslims in our midst. Trust in the ability of government to protect us at home and overseas. Trust that the nation will ever be able to put aside partisanship, race, religion and class and come together as it did on September 12th — and for a blessed but abbreviated time afterward.

This mistrust is keenly felt by Muslim Americans. In a new poll by the Pew Research Center, a majority of Muslims say that they feel targetted by government anti-terrorism policies; 55% say that being a Muslim in the United States is more difficult since 9/11. Significant numbers say that they have been viewed with suspicion, called offensive names and feel singled out by airport security. Would any other minority group accept this? Yet the survey also found a steadfast and overwhelming rejection of Islamic extremism and a similarly strong sense of satisfaction with life in America — nearly four out of five rate their communities as good places to live.

There is no way of knowing how Jews fit into this dynamic; our numbers are far too small to figure in this survey. The never-ending Israeli-Palestinian conflict surely affects Jewish-Muslim attitudes, but that could be counterbalanced by the fact that, in the American political context, Jews and Muslim share a prediliction for liberal politics and an understanding of the benefits of social acceptance.

There is, unfortunately, one disturbing way that a small number of Jews are contributing to the unfair characterizations and discrimination of Muslims. A new study by the Center for American Progress reveals that seven foundations have spent more than $40 million in the last ten years to spread misinformation about Muslim Americans. And who leads those efforts? Far too many Jews, including blogger Pamela Geller, co-director of the group Stop Islamization of America; David Yerushalmi, whose attempts to promote anti-Sharia laws were detailed recently in the Forward; Daniel Pipes of the Middle East Forum, which gave a platform for Yerushalmi’s dangerous ideas; Steven Emerson of the Investigative Project on Terrorism, who has even criticized President George W. Bush and New Jersey Governor Chris Christie for being soft on Muslims.

The attacks on Islam promulgated by these and a few others “go right to the heart of two critically important national issues: the fabric and strength of our democracy and our national security,” says the CAP report. Combating Islamophobia isn’t just a nice thing to do; it is essential to shoring up our security at home and our image abroad. The question is whether all the positive efforts to build trust with the American Muslim community can offset this well-funded, misdirected network.

In her novel, Waldman pens a poignant scene in which Salman Khan, father of her fictional architect, describes why he gave his son such a Muslim name, Mohammed. “We believed so strongly in America that we never thought for a moment that your name would hold you back in any way. And now — ” Given the fierce opposition to his son’s work, Salman wonders “whether this country has a place for us.”

“Of course it does,” Mohammad responds. “But sometimes America has to be pushed ­— it has to be reminded of what it is.”

Remember Who We Are