In a Palestinian State, Which Settlements Move? Here Are the Maps 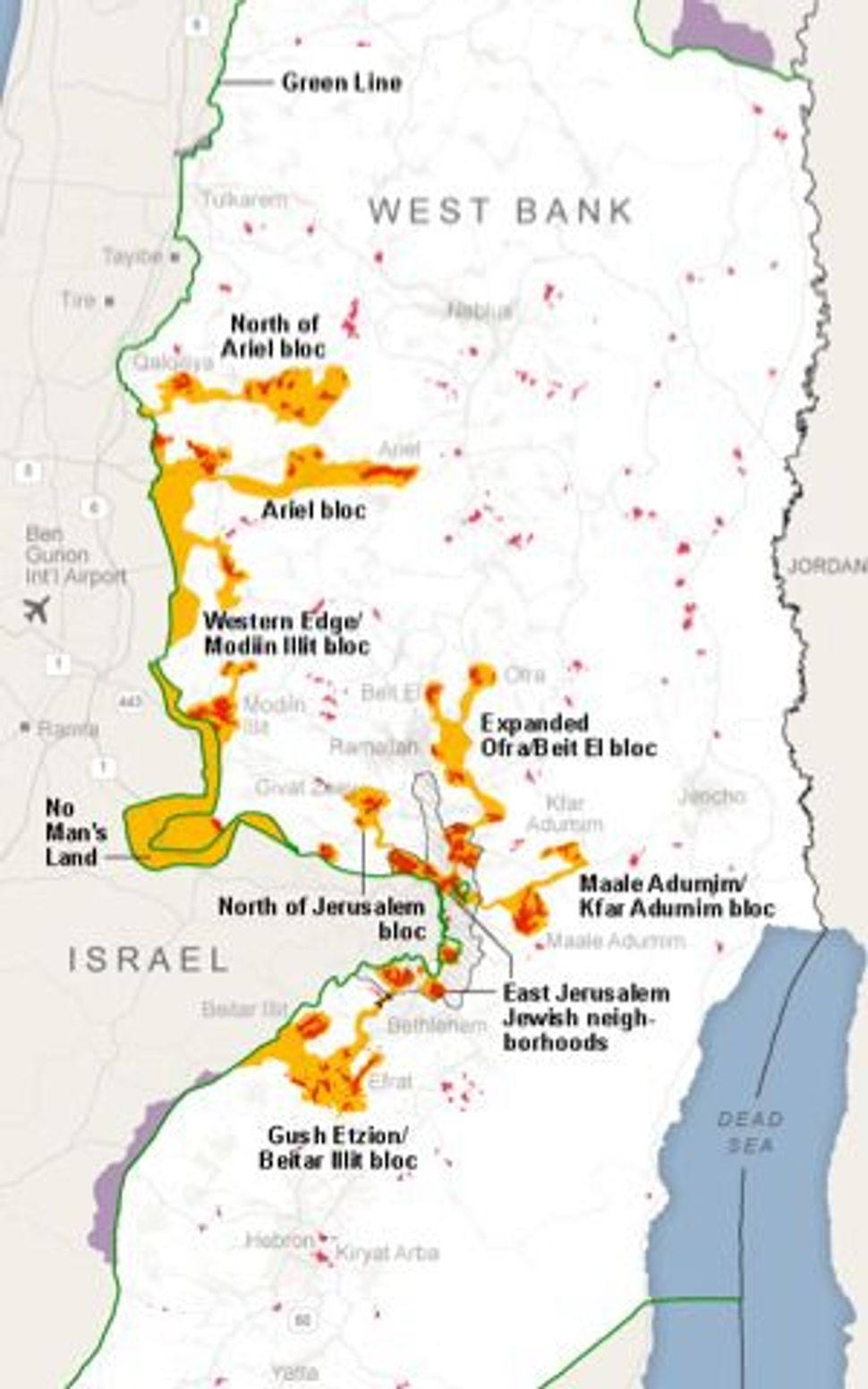 Every week seems to bring some new manufactured scandal that’s supposed to prove that the Palestinians aren’t really ready for peace. The latest is the phony blow-up over the statement by the Washington representative of the Palestine Liberation Organization, Maen Areikat, in which he’s supposed to have called for a “Jew-free” Palestinian state. Josh Rogin at ForeignPolicy.com has Areikat’s denial that he said anything of the sort, but Rogin doesn’t quite explain how this thing got started. Well-meaning Westerners are continually asking whether it wouldn’t be possible to avoid a traumatic relocation of Israeli settlers back into Israel after a peace agreement by allowing them to stay on as citizens of Palestine.

Israeli and Palestinian leaders alike regard that as a non-starter for a variety of reasons: The most militant settlers, who mostly are the ones deepest inside Palestinian-populated areas and would have to be relocated, didn’t go there for the scenery, the weather or the rent, but to assert Israeli sovereignty over holy soil, and the vast majority have no intention of being good citizens of another sovereignty. The Palestinians regard the settlements as illegal. Israeli politicians worry that they would be targets for Palestinian violence. Israeli intelligence worries that they would welcome attacks, possibly even provoke them, in order to draw Israeli forces back in and scuttle the agreement. Here’s the thing: When Palestinians and Israelis speak of the different populations in political terms, they tend to refer to them as “the Arabs” and “the Jews.” To American ears, such discussions have immediate connotations of bigotry, since we here associate “Jews” with “inoffensive minority” as opposed to “empowered sovereignty.” So a perfectly reasonable political discussion about future Middle Eastern borders and sovereignties gets caught up in an entirely unrelated anxiety about medieval European prejudice. We American Jews haven’t quite gotten our minds around Herzl’s dream of Jews being normalized among the nations.

Exactly which settlers are we talking about? Which settlements would be candidates for dismantlement, and which are in those mysterious “settlement blocs” that Israel expects to keep? And where in the world is Israel supposed to find the land to hand over in that one-for-one match of which the diplomats speak? Good question. And David Makovsky, the estimable journalist-scholar of the Washington Institute for Near East Policy (and former Jerusalem Post editor and Haaretz correspondent) has answers:

He published a series of maps on the New York Times website showing the most likely options. The individual maps differ in how many settlers would be relocated and how much land would be involved in the mutual swap. The more land is swapped (that is, the more of the West Bank Israel keeps), the fewer settlers have to be relocated. Alternatively, the less land is swapped, the smoother and more contiguous the new Palestinian state. It will be a very tough calculation on both sides. In the meantime, though, it makes for a fascinating afternoon’s study. Spend some time with it.

In a Palestinian State, Which Settlements Move? Here Are the Maps