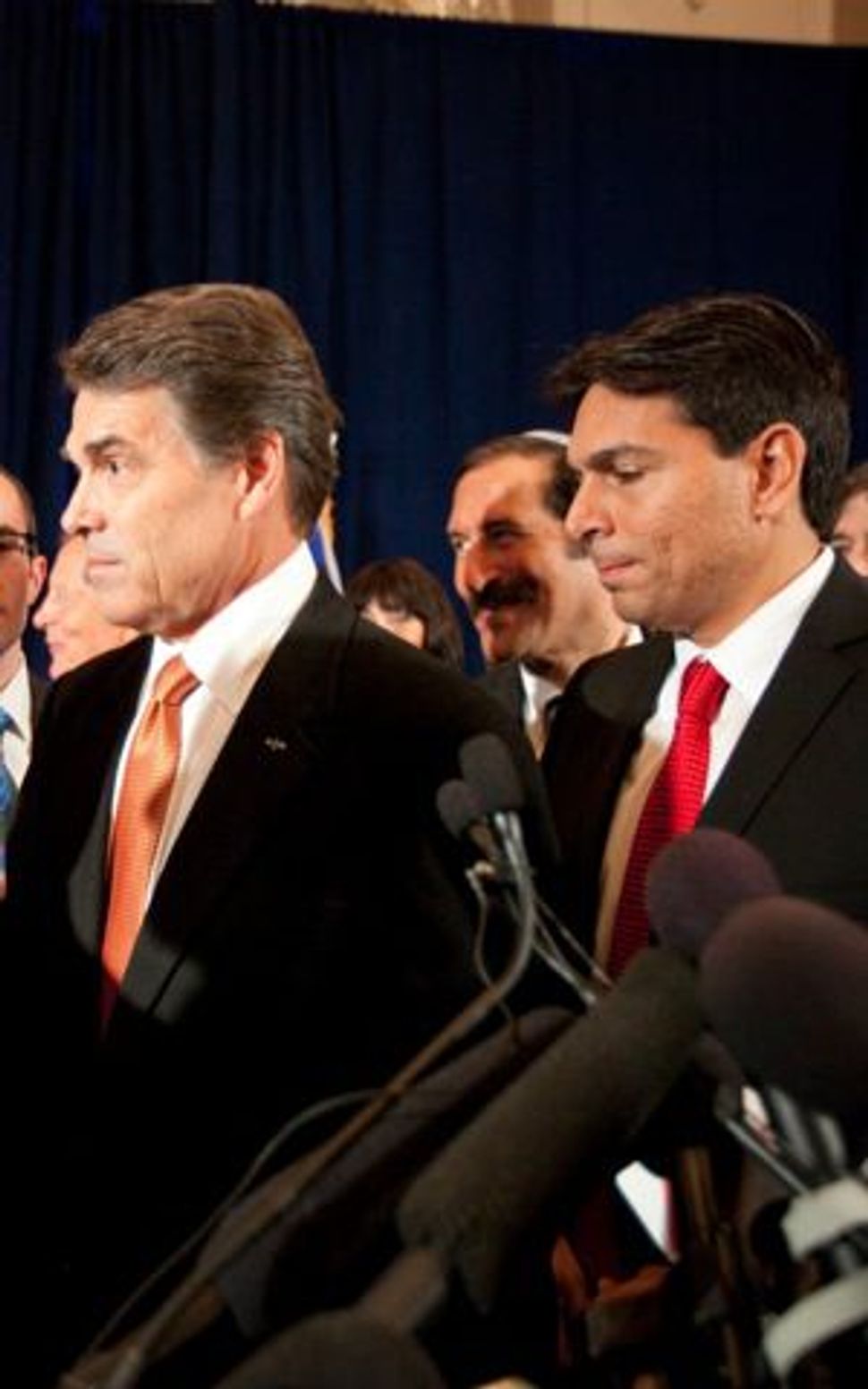 Now that Republican presidential wannabe Rick Perry has waded into the sticky-wicket of Middle East politics, it’s only fair to examine the influences on his thinking. After all, while Texas is a big state to govern, and he could probably see Mexico from the border, Perry doesn’t have much foreign policy experience, in the Mideast or elsewhere.

Not to worry. The governor has plenty of tutors. As Haaretz’s Chemi Shalev wrote after Perry’s press conference yesterday, the supposed GOP front-runner is sounding like a hard-line Likudnik with a southern twang.

And he’s following not just any Likudnik. Perry’s new BFF, it seems, who stood next to him at the press conference, who says he’ll usher him around Israel later this year, is deputy Knesset speaker Danny Danon.

Danon’s views aren’t a mystery — his website has a spritely English version. The latest entry, from Sunday, repeats the Danon plan to bring peace to his troubled region: not the two-state solution that even his party leader, Benjamin Netanyahu, professes to support, but a three-state solution.

Rather than consider an independent Palestinian state now or in the future, Danon proposes that Israel assert what he calls “full sovereignty” over the West Bank — that means annexation — inviting Palestinians (though he calls them Arab-Israelis) to become citizens of Israel. “The remaining enclaves of Palestinian towns and villages in Judea and Samaria would become part of either Egypt or Jordan, and the Egyptian and Jordanian borders would extend accordingly to these designated towns,” he writes.

And how exactly is this supposed to work? Has MK Danon seen a map of the West Bank recently? Jewish settlements are so interspersed with Palestinian towns and villages that the shape of these new borders would make the worst congressional districting plan look positively orderly by comparison.

To his credit, Perry said at the press conference that he endorsed a two-state solution, which reportedly dismayed Danon. But only a little bit. “If you look at the overall picture, we share the same values and principles,” Danon said.

Glad he cleared that up.