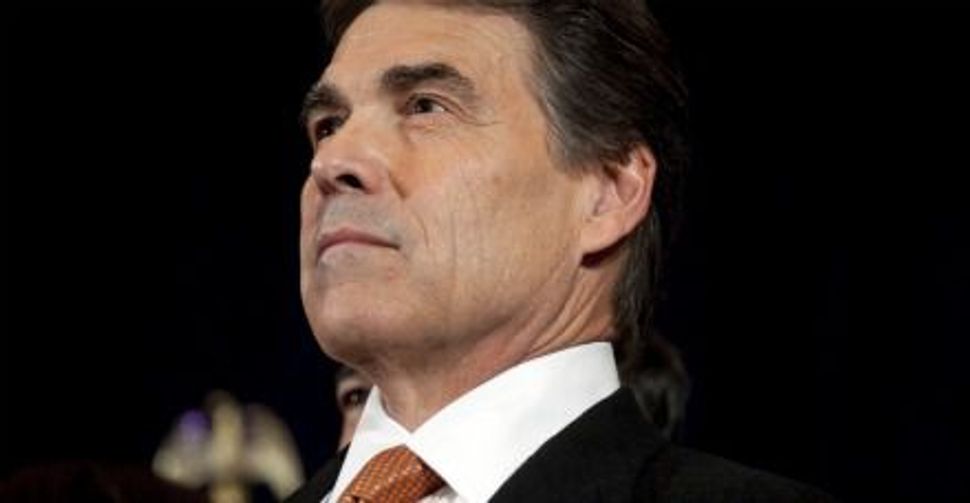 As of this writing, there is no outcome to the maneuverings at the United Nations over whether the Palestinian Authority will request a vote on statehood and, if so, how that vote will proceed. But there is already one outcome of this troubled period in America’s relationship with Israel that we fear could prove dangerous for Israel and disastrous for American Jews. And that is the way the Republican Party has turned support for Israel into an uncompromising, highly partisan issue.

Actually, we’ll amend that: It’s not support for Israel that the GOP is promoting so fiercely, without regard to history, facts or consequence. It is support for the current Israeli government, its approach to Palestinians and, we might add, its own Jewish and Arab citizens that has become the new litmus test of American politics. Lost in all the belligerent rhetoric is some connection to the hopes and needs of ordinary Israelis, to the voices in Israel’s military and intelligence establishments who have urged a different path, and to the pleas of nearly half a million people who have taken to the streets, protesting for social justice.

Listening to that Israel is being pro-Israel, too.

But such nuance is lost on many Republicans. Instead, congressional GOP leaders act as if they believe that in holding Benjamin Netanyahu completely blameless for the stalled peace process, in slamming and undermining President Obama at every turn, and in threatening to cut off necessary aid to the Palestinians, they will somehow change the ancient calculus that aligns American Jews with liberal social and economic policies. They won’t. They act as if they speak for all of us. They don’t.

Republican members of the House have even introduced legislation to support Israel’s annexation of the West Bank, a move contrary to both American and Israeli official policy and an absolute affront to international law and democratic rights.

This determined kowtowing to a perceived Jewish vote isn’t confined to the halls of Congress. It has reached down to local levels where federal spending and global diplomacy are irrelevant. Just one example: The City Council in Philadelphia on September 15 held hearings on a resolution opposing the Palestinian attempt to gain recognition for statehood at the U.N. This had nothing to do with the many ills of that city; it doesn’t even have to do with educating the public on the issue, which is hardly in the job description or the qualifications of a local elected public official (particularly in Philadelphia). It had everything to do with political pandering.

“Why is City Council reaching out to get involved in supporting legislation that is divisive and has nothing to do with the city of Philadelphia?” a city resident demanded in a local online news outlet. Why? Because the Republican council member who introduced the resolution obviously thought it would win him some points with his Jewish constituents. It passed, of course.

And now this pandering has taken center stage on the presidential campaign trail, with the appalling and inaccurate statements by the GOP frontrunners, Mitt Romney and Rick Perry. Anyone paying attention to President Obama’s U.N. speech on September 21, in which he defended Israel unequivocally, could dispute Romney’s assertion that the president has thrown Israel “under the bus.” And Perry’s flaming statements in print and in person seem to reflect more and more his new Israeli muse, Danny Danon, the deputy speaker of the Knesset who advocates annexation of the West Bank and believes somehow that Egypt and Jordan would willingly govern Palestinian cities and villages and therefore no independent state is needed. Really.

It’s time to call out those who would use Israel for political gain. It’s time for American Jews to put our values and our votes in context, and stop allowing a few people with loud, extremist voices to act as if they speak for all of us. Only 7% of the voters in the heavily Jewish district in Queens that recently elected a Republican to office cast their ballots based on Israel, exit polls say. Seven percent. The overall vote was certainly a repudiation of Democratic policies — tinged, just perhaps, by the fact that the former Democratic officeholder resigned in a sex scandal. But to frame it as a message to the White House only about Israel willfully distorts what actually happened.

Too much is at stake to allow this type of misrepresentation to continue without response. In the long run, Israel will not become safer if it becomes even more isolated, and if the legitimate aims of the Palestinian people are denied. We continue to believe that unilateral action at the U.N. is a bad idea, but there are steps that Israel and the Palestinians can take to hasten the return to real negotiation and resolution. Punitive moves to deny funding will only worsen the situation on the ground and encourage the Palestinians to seek financial solace from far less friendly nations.

Meantime, American Jews must tend to our own garden. Already, discussion about Israel in too many venues, from public forums to family dinners, has become fraught and painful, as if there were code words for acceptability, and silence otherwise. We cannot judge each other so harshly for sincere opinions, nor can we permit others to frame the contours of our debate. Israel’s safety and well-being is a priority, but for many American Jews it is not their only priority, and that must be respected. We are Americans, after all.

And as Americans, we do not want to reach the point where our loyalties are questioned, our speech curtailed, our values perverted. We Jews are skilled enough at internal debate; we don’t need anyone or anything else to try to divide us.