Has Obama Lost the Jews? Don’t Ask the Polls 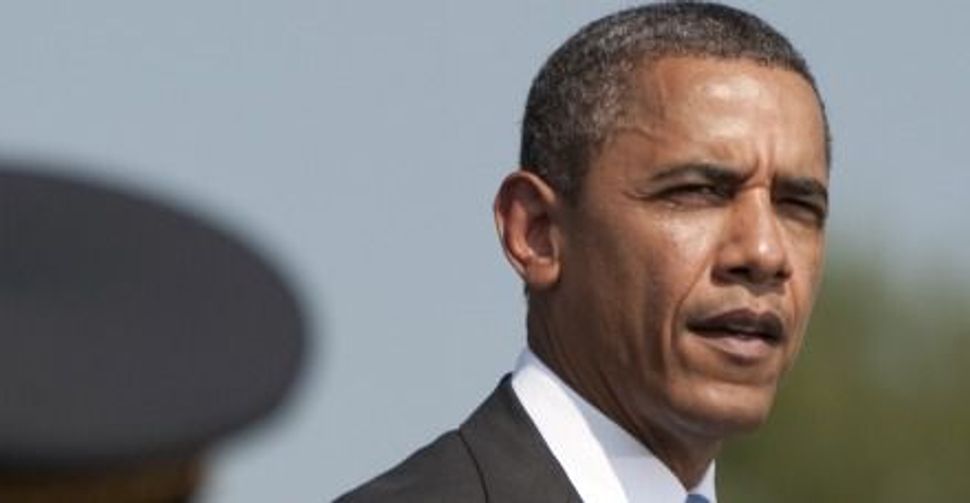 President Obama got an unpleasant New Year’s greeting from the American Jewish Committee just before Rosh Hashanah: A survey of American Jewish opinion showing his job performance got a failing grade from a plurality of Jews for the first time in his presidency. It may be the lowest Jewish rating for a Democratic president since Jimmy Carter. Before that, you’d have to go back to Woodrow Wilson. Shana tova, Mr. President.

Given traditional Jewish loyalty to Democrats, the shock to Obama’s party is as much emotional as it is strategic. His early fundraising is soaring, regardless of Jewish poll numbers. His general polling numbers are so lousy that Jewish votes don’t really matter. But as a symbolic marker, any cracking of the storied alliance will be a blow to Democrats’ morale — and a big boost to Jewish Republicans.

As Commentary’s online editor Jonathan Tobin blogged, “the “belief [that] Obama cannot be trusted to stand by Israel is providing the GOP with some traction among Jewish voters.”

The annual AJC survey, released September 26, found 45% of respondents approved of the job the president is doing, while 48% disapproved. The last survey, in September 2010, showed roughly the reverse: 51% approved, 44% disapproved.

On specific issues, respondents disapproved of Obama’s handling of the economy by a whopping 37% to 60%, but strongly approved of his national security performance, 68% to 28%. He was slightly ahead on energy policy and slightly behind on immigration. His foreign policy rating was statistically tied, 47% to 48%.

The president’s handling of U.S.-Israel relations was addressed in a separate, stand-alone question, with a colorful pie-chart to accent its importance. The score: thumbs-down. Only 40% approved of his handling of the issue, while 53% disapproved. By contrast, Israeli Prime Minister Benjamin Netanyahu, Obama’s frequent foil, got a big thumbs-up on U.S.-Israel relations: 54% approved, while just 32% disapproved.

Worse for Democrats, Obama’s unpopularity spills over into respondents’ own party identification. Over the past decade, between 53% and 57% annually called themselves Democrats. This year only 45% did so.

Are American Jews finally moving into the Republican column? Not likely. Much of the disapproval seems related to the president’s failure to protect traditional liberal goals. You find hints of this deeper in the survey’s findings. For one thing, while fewer called themselves Democrats, the percentage of self-identified Republicans didn’t budge; it remained stuck at 16%, where it’s been for more than a decade. Rather than move to the GOP, disaffected Jews identified as independents this year.

The numbers suggest that the Jews aren’t moving to the right. More likely, they think Obama is.

Curiously, a very different snapshot of Jewish opinion appeared just days before the AJC survey, in a September 16 Gallup poll. Gallup found Jewish approval of Obama dropping even more precipitously than AJC — yet remaining favorable. Obama’s approval among Jews in August and September was 54% in Gallup’s poll, down from 67% a year earlier. That is, Gallup found a full 13-point drop in Jewish approval in a year, while AJC’s drop was just 6 points. And yet, somehow, Gallup’s bottom this year, 54%, was higher than AJC’s peak last fall, 51%.

Equally important, Gallup’s Jewish approval rating was 13 points higher than the general population’s rating of 41%. Obama’s Jewish approval fluctuated from month to month, Gallup reported, but remained consistently 13% to 14% above the general population’s, evidently responding to the same issues that drive general opinion. “This calls into question attempts to link a decline in Obama’s approval among Jews to his statements or policies on matters important to Jewish policymakers and lobbyists,” Gallup said in its release.

Why does AJC find Obama so much more unpopular than Gallup does? Jennifer Rubin, the conservative Washington Post blogger and former Commentary staffer, notes that the AJC’s survey sample has more Orthodox and Conservative respondents and fewer Reform and “Just Jewish” than most other studies of the Jewish population. She’s got a point. It’s built into AJC’s survey method.

Classic random digit dialing surveys are expensive. AJC polls from a list of self-identified Jews assembled by a marketing company that maintains a pool of hundreds of thousands of people who volunteer to be interviewed on various topics. As Jews who knowingly agree to be studied as Jews, their average Jewish identification is a bit stronger than the norm. For example, AJC regularly finds around 55% of respondents belong to a synagogue; in most other studies it’s closer to 40%.

Because they are more traditional, their politics are skewed slightly rightward. It’s not enough to invalidate the enterprise, but it’s worth noting. In September 2008, AJC asked respondents who they expected to vote for in November; 57% said Obama, 30% McCain. In Election Day exit polls, 78% of Jewish votes went to Obama, 21 points higher than predicted, and 20% to McCain. Some of the discrepancy might represent people who decided at the last minute, but not one-fifth of the electorate. It appears a significant fraction of Obama’s Jews don’t show up in AJC surveys.

But we still don’t know why Jews are leaving Obama and what role Israel plays. Conservatives say Israel plays a key role. Gallup suggests it’s the economy, combined with Obama’s generally hapless image. AJC seems to want us to infer that it’s largely about Israel, considering the prominence the issue gets in the survey’s published format. But they’re all guessing. Nobody actually asked the survey respondents: If you disapprove, how come?

There are hints in some earlier AJC surveys, though. The 2007 and 2008 surveys asked respondents to name the most important issue in deciding their vote for president. In 2007, the economy and health care were first and second, with a combined 42%, followed by Iraq and terrorism with a combined 30%. Israel, immigration and “the energy crisis” got 6% each. This was awkward, because Israel, immigration and energy independence (from Arab oil) took up most of the rest of the survey and consume the bulk of AJC’s budget.

In 2008, with the economy in free fall, 54% picked the economy and 11% picked health care. Iraq and terrorism, next in line, received just 6% and 5% respectively. Only 3% picked Israel. The question was reframed in 2010 to give Israel and energy a boost, but they still fell flat. This year the question wasn’t asked.

In effect, the best-known organization speaking for the needs and concerns of American Jews has nothing to say about the issues that most concern American Jews. It wasn’t always so. Something’s changed. It’s not the soul of the American Jew, though; that remains remarkably consistent.

A NOTE TO THE READERS: In my column last week I made an insensitive and offensive reference to autism, based on my misunderstanding of the syndrome. Several readers have pointed it out to me, and I thank them for the correction. My apologies to all. – JJG

Has Obama Lost the Jews? Don’t Ask the Polls