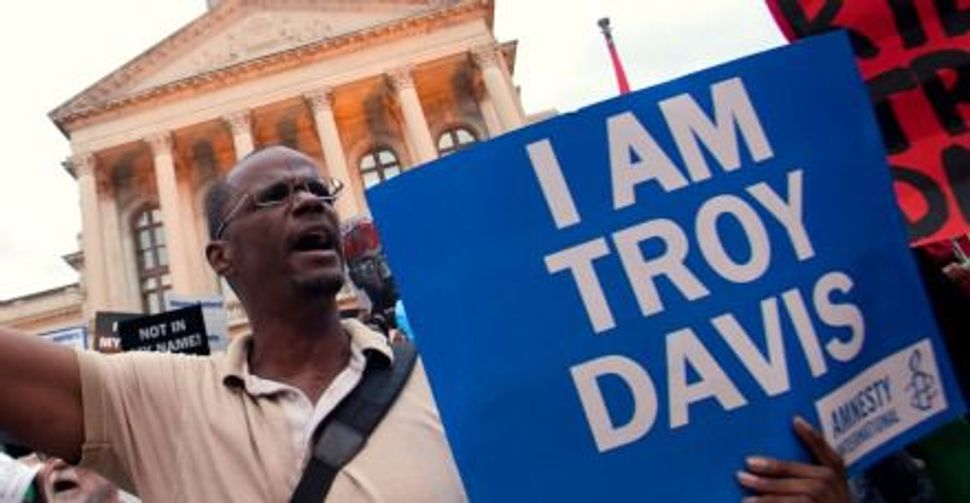 According to Amnesty International, the United States ranked fifth in the world in the number of its citizens who were executed in 2010. And what company we keep! China, Iran, North Korea and Yemen bested us in this dubious competition, but at least we beat out Saudi Arabia. How’s that for American exceptionalism?

Ever since a court-ordered moratorium on capital punishment expired in 1976, the United States has maintained its ignoble position among nations that have some of the worst human rights abuses on the planet. And we keep executing people — the latest being Troy Anthony Davis on September 21, for the 1989 murder of a police officer, even though there was no physical evidence tying him to the crime, even though seven of the nine eyewitnesses in the case recanted, and even though he maintained his innocence until the end.

That Davis was an African-American man in Georgia — seventh among states in its rate of executions since 1976 — worsened the odds against him. But it’s our operationally flawed and inhumane justice system that is fundamentally at fault here.

It is impossible to know from a distance whether Davis’s claims of innocence are to be believed or whether the doubts raised against his case were valid. But there should not be any doubts if the state — acting on behalf of “we the people” — is to take a life.

Here, Jewish law is instructive. Although the Torah is replete with instances when capital punishment is mandated, later rabbinic interpretations and rulings created huge obstacles to actually putting someone to death. One ancient rabbi was said to have remarked that a Jewish court that permitted even one execution in 70 years was considered “murderous.” The bar was set deliberately high: Confessions were banned, the admission and sufficiency of evidence were strictly monitored, and guilt was meant to be a near certainty.

Such certainties don’t exist in the American judicial system, reliant as it is on human behavior and societal biases. Your chances of landing on death row are influenced by your race and income, where you live, who’s your lawyer and just plain luck. Punishment is far from swift — the crime for which Davis was executed occurred more than two decades ago — or fairly implemented. The fact that new advancements in DNA technology have exonerated a growing number of people who were wrongly convicted is proof of that.

Such flaws could be more acceptable and even understandable if death were not so final. Mistakes will be made in any human enterprise, but once the government assumes the authority to decide who is to die, and assumes the power to implement that decision, then it has become supra-human, God-like, deistic. That power is implemented not on behalf of some distant entity, but in the name of you and me.

That could be why a growing number of states have decided to get out of the business of deciding who shall live and who shall die. Since 2007, four states have abolished the death penalty — New Jersey, New Mexico, New York and, just this year, Illinois — bringing the total to 16 states, not including the District of Columbia. And many of the states with statutes on the books rarely use them; America’s dubious ranking worldwide is largely fueled by the governmental killing machine in Texas, which has executed 475 people since 1976, more than four times the number of the next busiest state, Virginia.

Unless and until the U.S. Supreme Court or, even more unlikely, Congress outlaws capital punishment, it will be up to individual states to decide whether the moral, legal and operational burden of maintaining the death penalty is worth the considerable costs. In the end, this isn’t just about the rights of victims or the accused; it’s about whether government should kill in the name of all of us.