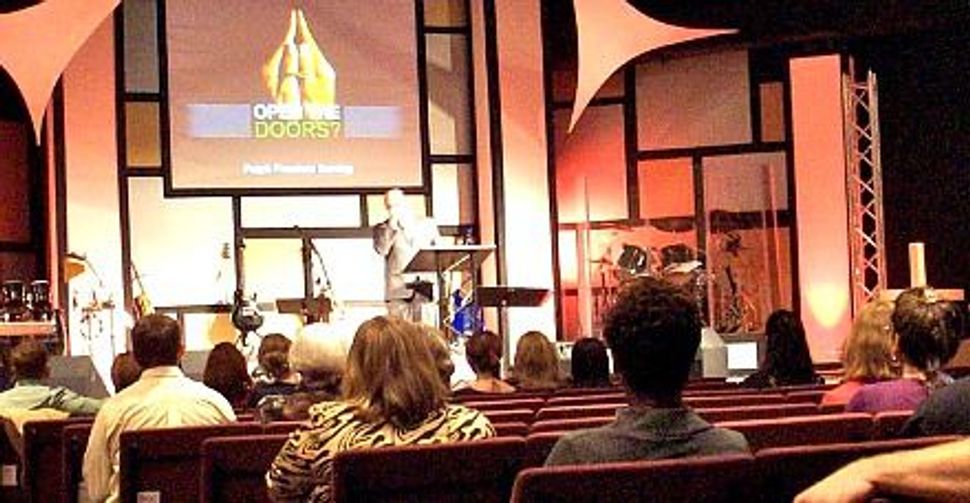 On Sunday, October 2, the Revival Assembly Church in Manchester, N.H., was one of the 539 churches around the country participating in Pulpit Freedom Sunday, an increasingly popular form of civil disobedience on the religious right. Pastor Chris Anu urged the 80 parishioners in his Pentecostal church to reject same-sex marriage as an abomination and to insist on being able to pray in schools and other public places. He didn’t endorse a political candidate, but, as he told the Forward afterward, “the need will come when we have national elections.”

It’s not clear whether Pastor Anu’s sermon that Sunday actually violated the federal law that prohibits non-for-profit churches and charities from engaging in political activities. But he sure intends to flout that law in the future.

The aim of Pulpit Freedom Sunday is no less than the repeal of what’s known as the Johnson Amendment, introduced by then-senator Lyndon B. Johnson and enacted in 1954. When the Alliance Defense Fund started organizing annual preacher protests in 2008, only a handful of churches joined in, but the number quadrupled in the past year alone. This is a dangerous movement that needs to be forcefully answered.

Pastor Anu may run a fine church, but his argument that ministers should have the same free speech rights as ordinary citizens is simply indefensible. Not when that minister is the religious head of a church that receives tax-exempt status from the Internal Revenue Service, enabling it to accept charitable donations, ignore civil rights laws and erect a thick veil of secrecy around its operations. Those privileges — and they are privileges, not inalienable rights — are granted in return for the obligation to refrain from outright partisan politics.

This constitutional bargain doesn’t prevent a priest, rabbi or imam from speaking in a prophetic voice from the pulpit about the searing issues of the day. But it draws the line against religious institutions that encourage members to vote for a particular candidate, disseminate partisan voters’ guides and collect money for a campaign. These are not fictional infractions. They are specific instances found by IRS investigations in the past decade.

While these sorts of activities are not conducted solely by religious institutions on the right — black and Catholic churches in Democratic strongholds have been known to endorse or oppose political candidates — the current campaign to repeal the Johnson Amendment is dominated by clergy who contend that they are censored for their Christian beliefs. And there’s a deep strain of anti-government fervor in their argument, especially in the claim that the IRS is bullying and intimidating pastors in order to squelch their rights to free speech.

In fact, there’s some evidence that the IRS isn’t doing enough to enforce its own rules; for instance, it has stopped issuing biannual reports detailing illegal political campaigning by charities, including churches. This is a real loss. Religious institutions hold a special place in American society, which should be protected. But if they don’t want to abide by the few restrictions of tax-exempt status, then they can send a check to the IRS like everyone else.