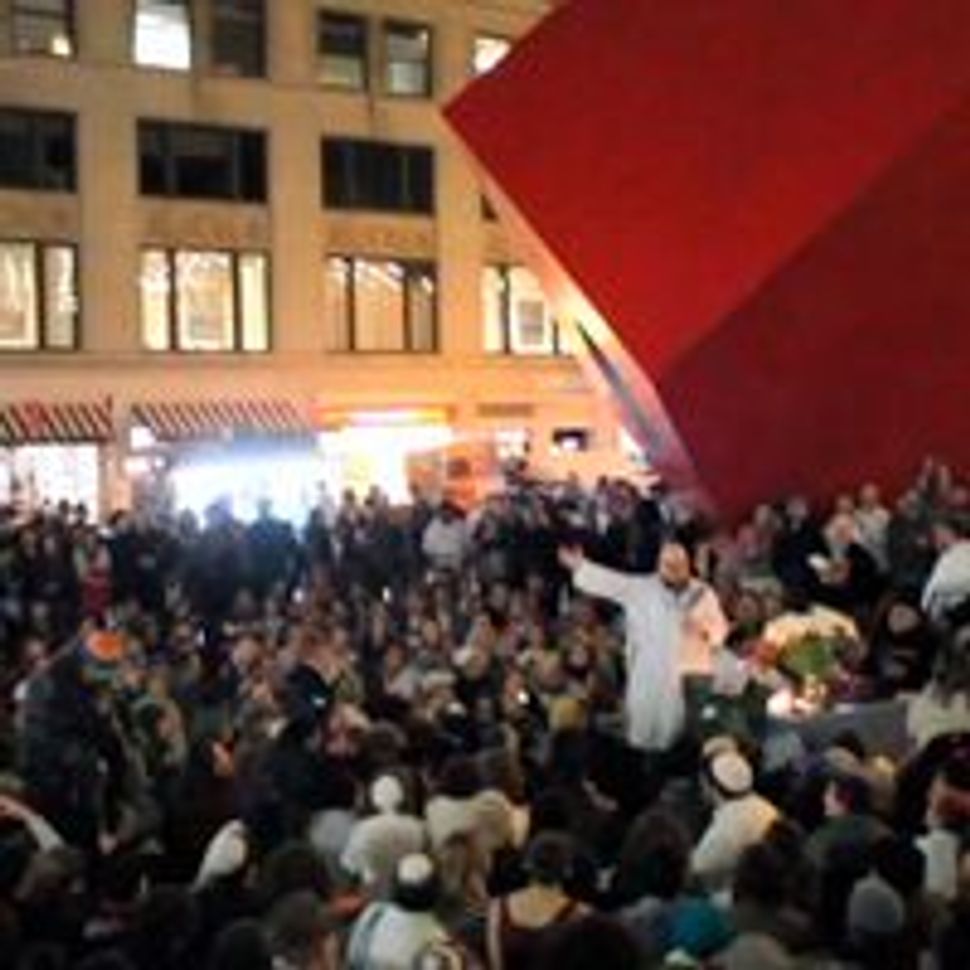 A large, open plaza across from Manhattan’s Zuccotti Park, where Occupy Wall Street has made its encampment for three weeks, proved to be the perfect setting for Kol Nidre on Friday night.

Earlier in the week, when Daniel Sieradski, Occupy Wall Street protester and self-styled “new media activist,” wondered on Facebook and Twitter whether he could get a minyan to show up for the service, I began to get excited about the idea. I’m always up for an interesting service, and if nothing else, this was going to be different.

As sundown approached on Friday, a crowd that some estimated at 700 people gathered on the plaza for the prayers that begin Yom Kippur. Similar services were held at Occupy Wall Street camps in Washington, Philadelphia and Boston.

Here, in New York, a cluster of service leaders huddled in the middle of the outdoor plaza, with the crowd sprawling out around them in an enormous circle. The service was mostly in Hebrew, with the familiar melodies. No instruments were played, and there was no amplification. In keeping with the style of the occupation in the park across the street, which does not have a sound system permit, announcements were shouted by a single speaker in short phrases, and each phrase was repeated back through the crowd so everyone could hear it.

The entire service was led this way, including the sermon, written and shouted by my friend, Getzel Davis, a fourth-year rabbinical student at Hebrew College in Boston.

I think all sermons should be delivered this way for all eternity. There’s no better way to capture a crowd’s attention with a Yom Kippur sermon than to hear the message ripple back through the congregation in short bursts. The energy of the crowd was enhanced by the recurring call and response, and by being physically close to one another; once you were in the crowd, it was packed tight and there was no getting out.

While the organizers and many present were regular service-goers, this Kol Nidre also attracted a healthy number of people who probably haven’t been to a synagogue in years. I am a very regular synagogue attendee, but a service has never felt more relevant. The high point came during one part of the sermon, as Getzel’s voice rose louder and louder:

“Yom Kippur is the day that we are forgiven for worshipping the golden calf!

“What is the golden calf?

“It is the essence of idol worship!

“It is the fallacy that gold is God!”

Afterward, I felt like I was walking on air, and judging from the spontaneous song session that sprung up later, I suspect I wasn’t the only one.

There are plans to build a sukkah at New York’s Occupy Wall Street and to continue holding Shabbat services until the protest is over. I’ll be there.