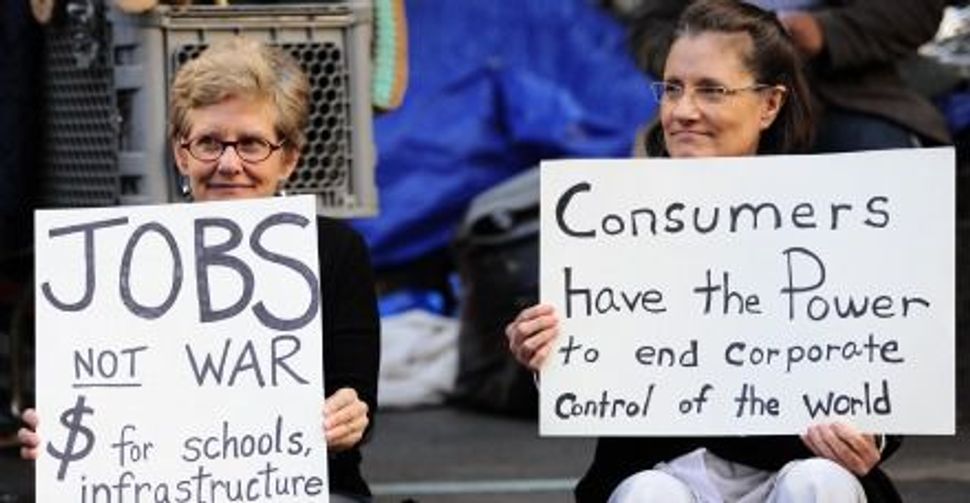 Is Occupy Wall Street an outgrowth of the J14 protests, the social justice movement begun in Tel Aviv on July 14 that drew nearly half a million Israelis to the streets? The tents, the youthful organizers, the anarchic hodgepodge of themes and complaints certainly make it easy to draw the analogy. In fact, we wish the protests occupying outdoor public space in cities across the nation were more like their Israeli counterpart in one respect: the response. Whatever you think of the Israeli government’s reaction to J14, there has been a concrete response. By contrast, American political leaders don’t know how to react to Occupy-ers except to ignore them or deride them, and that’s partly because it’s not clear what the movement would want if, in fact, someone in power paid real attention.

True, as soon as J14 was ignited by one frustrated Israeli woman pitching a tent on chic Rothschild Boulevard, it was criticized as lacking purpose and a political agenda. That very openness allowed it to embrace and channel the deep-seated frustration of many middle-class Israelis who felt that their hard work and personal sacrifice were unrewarded in a society that seemed to betray its Zionist promise.

Its focus was and remains domestic concerns, issues tangible and popular enough that the government had no choice but to respond. Prime Minister Benjamin Netanyahu appointed a respected academician, Manuel Trachtenberg, to lead a committee charged with making policy recommendations, which were approved by the Cabinet on October 9.

Those recommendations — to reduce tariffs on food, provide extra benefits for working mothers and to expand child care, among other proposals — were quickly dismissed by some protest leaders and the opposition Kadima and Labor parties. Indeed, the Trachtenberg report may be no more than a timid, even useless response by a government unwilling to take the bold steps needed to address the growing poverty and inequality plaguing Israel’s “start-up” society. J14 leaders are issuing their own report in a few weeks. There’s talk of a general strike.

But debate over the quality of the Trachtenberg report should not obscure its fundamental value as a concrete offer by a government to its citizens. This dynamic is what happens in a representative democracy, a kind of civic call and response, which acknowledges both the validity of citizen complaint and the necessity of government response.

This is what’s missing so far in the reaction to Occupy Wall Street as it spreads across the nation. Some political leaders are outright hostile, others seem flummoxed, still others are clearly waiting to see whether this minority of protesting Americans on the left grows to approximate the size and power of those on the right who became the Tea Party.

Responsibility for this unsatisfying response, however, doesn’t all lie with the political class. Even if some part of the establishment does make common cause with the Occupy-ers, to what aim? What would success look like? Without some semblance of an agenda, a legislative goal, a policy solution, this at-times stirring display of public outcry will dissipate, turn violent or become corrupted, only adding to the disappointment of a population already feeling cheated and ignored.

It’s seems obvious that the one unifying trope at these varied protests is anger at the increasing economic inequality in the United States, which has stifled individual creativity, hobbled government, diminished our global legitimacy and created a civic disconnect that threatens to unravel the egalitarianism that has been the hallmark of the American dream. There are concrete proposals to begin to address this issue, even one waiting for action right now in the Senate that calls for a surtax on the earnings of millionaires. It may be as unsatisfying as the Trachtenberg report is to J14 protesters, but it is a start.