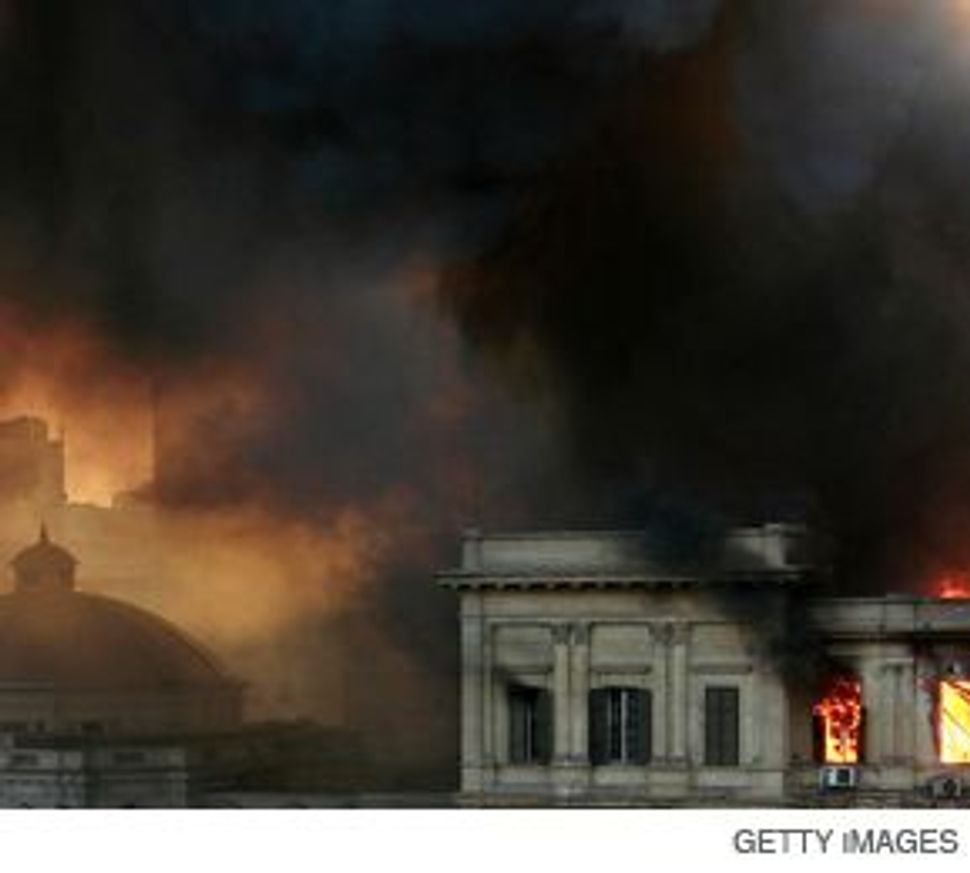 CAIRO BURNS: The August 19 fire that ravaged the upper house of Egypt?s parliament underscored for many Egyptians the ineptitude and corruption of their government.

This year’s presidential campaign featured vigorous debate over American policy toward Iraq, Iran, Pakistan and Afghanistan. In contrast, Egypt, a longtime pillar of American foreign policy, has remained completely off the radar. This is worrying, because the Arab world’s most populous country will pose a daunting challenge to the next president. 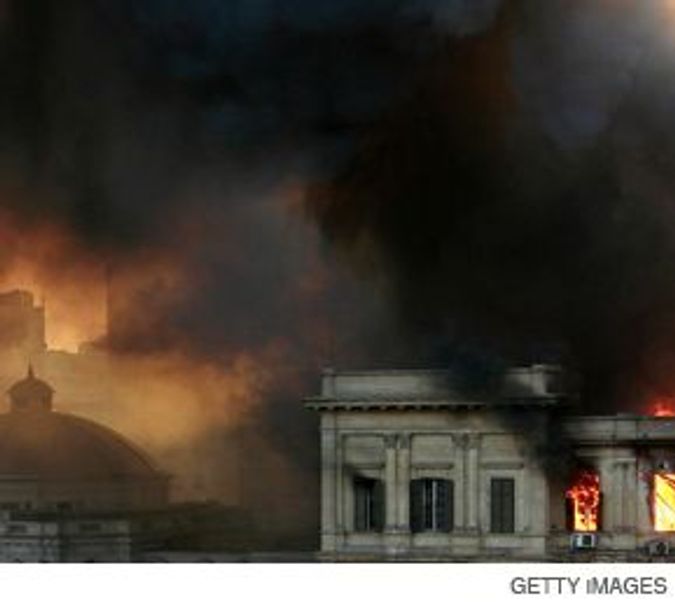 CAIRO BURNS: The August 19 fire that ravaged the upper house of Egypt?s parliament underscored for many Egyptians the ineptitude and corruption of their government.

It has been 27 years since Hosni Mubarak took the reins of power in Egypt, following the 1981 assassination of Anwar Sadat. President Mubarak’s legacy has been one of political repression, economic stagnation and seething resentment on the part of the Egyptian people — an anger that now seems ready to explode.

Egypt’s domestic political discourse continues to be dominated by the bland propaganda of Mubarak’s National Democratic Party. Rather than healthy public debate, Egypt gets catastrophes rich in symbolism.

Two recent incidents stand out: an August blaze that devastated the upper house of Egypt’s parliament, followed the next month by a fire that gutted Cairo’s National Theater. While both fires have been described as accidents, the government’s failure to protect these national landmarks underscored for many Egyptians the regime’s ineptitude and corruption.

Writing about the parliament fire, the editor of Egypt’s main English-language newspaper, The Daily News, warned ominously that the disaster was “a prelude to future ones.” Such hints of an imminent popular revolution have become alarmingly frequent — and with good reason.

In April of this year, food riots broke out in the Nile Delta city of Mahallah. It was the worst outbreak of social unrest since bread riots almost brought down Sadat in 1977. The “Mahallah Intifada,” as it has come to be known, coincided with a strike at the city’s main factory, itself the culmination of the biggest wave of industrial unrest Egypt has witnessed since the years leading up to the July 1952 military coup.

While the regime ended up crushing the Mahallah uprising and rounding up its ringleaders, little was done to address its underlying causes. A 30% pay raise for civil servants took the steam out of a planned second round of protests, but the government then raised prices on key goods by a similar amount. And the official rate for urban inflation has since risen to 26%, exacerbating the suffering of ordinary Egyptians.

Nor is there relief anywhere on the horizon. The global credit crisis has resulted in the Egyptian stock market plummeting by 20% in October (at the time of this writing) as foreign investors pull out of emerging economies. Local newspapers are full of stories of Egyptians committing suicide after losing their life savings: the final evisceration of the country’s middle class.

The global economic crisis also has dealt a setback to the regime’s already struggling economic program. The linchpin of the government’s economic policy for the past two decades has been attracting foreign investment, mainly through privatization. These efforts, however, have proceeded fitfully and failed to do much for the average Egyptian. Still, Prime Minister Ahmed Nazif continues to display blind faith in this approach, despite an earlier assessment from the head of the World Bank that it will take “a generation” for ordinary Egyptians to feel any benefit from the country’s trickle-down economic growth.

Will Egyptians wait that long? The past century has seen revolutionary or near-revolutionary change in Egypt every three decades: the nationalist uprising in 1919, the military coup in 1952 and the 1977 food riots. This suggests that the country is ripe for another uprising.

The next popular revolt could well be triggered by an announcement that the son of the ailing Hosni Mubarak, Gamal, will stand for president. Opposition to Gamal Mubarak inheriting the reins of power is one thing that unites all of Egypt’s fractious opposition groups.

The regime’s attempts to present Gamal Mubarak as a man of the people have failed. The final nail in the coffin of this public relations push may be the current sensational trial of Egyptian billionaire Hisham Talaat Mustafa. A leading member of the ruling party who is said to be very close to the president’s son, Mustafa is alleged to have paid for the murder of his former lover, a Lebanese pop singer, in Dubai. While Mustafa has maintained his innocence, the scandal has reinforced negative perceptions of the president’s son and his inner circle of unsavory business associates.

But public resentment of the effort to promote Gamal Mubarak as his father’s successor is only one among the many simmering grievances that could boil over. There is also anger over the actions of the secret police network, the regime’s use of torture, widespread corruption and the perception that Egypt’s Westernized elites are robbing the country under the guise of liberalizing its economy and opening it up to foreign investors.

All this recalls Iran during the last days of the Shah. Opposition to the Shah’s rule was diverse, as is opposition to Mubarak in today’s Egypt — made up of students, secularists, feminists, Marxists, anti-imperialists and Islamists. The Iranian revolution began with wildcat, uncoordinated and inchoate strikes and rebellions that built upon each other. As the unrest grew, it was joined by groups with better organization and clearer political goals. Iran’s Islamists triumphed in the months after the 1979 revolution because they proved to be the most disciplined and ruthless force on the scene. The analogy here, of course, is with Egypt’s Muslim Brotherhood, the best-organized opposition group.

So what can Washington do about all this? The key is the roughly $2 billion the United States gives Egypt annually in aid. It should explicitly be tied to progress on political reform, especially free and fair presidential and parliamentary elections, a genuine drive against corruption and the lifting of continued restrictions on freedom of expression.

The Mubarak regime likes to tell America that loosening its grip on power would open the door to political upheaval and a potential takeover by the Muslim Brotherhood. In fact, that is what Washington risks by continuing to prop up Egypt’s dictator.

America’s next president should take full advantage of the Mubarak regime’s current vulnerability to push for the opening up of Egypt’s political process and clear the way for the country to address the underlying causes of instability. But Washington must act quickly, before it becomes too late to do anything but watch from the sidelines as Cairo burns.

John R. Bradley is the author, most recently, of “Inside Egypt: The Land of the Pharaohs on the Brink of a Revolution” (Palgrave Macmillan).