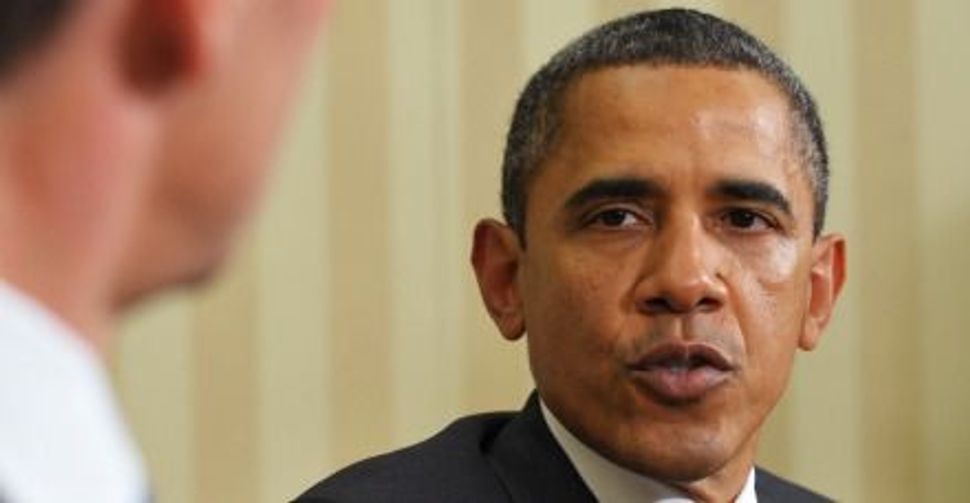 President Obama is getting precious little credit for his policy heroism these days. But here is one conservative ready to applaud the president for an idea whose time has come.

Let’s tax charity. Absolutely. The president, in his plan to bring down the deficit, said that he wanted to bring down the deduction for charitable giving to a maximum of 28% on each dollar. That would be a big deal. Right now, high-income donors in the top two brackets can write off far more on their taxes — 33% and 35%, respectively. Obama’s proposal amounts to a massive tax increase on charitable giving.

Not surprising, nonprofits — including the entire Jewish communal world — are upset about this. Their biggest donors would see a 20% cut in the value of a charitably given dollar. As the president would say, this isn’t politics, it’s math: If a wealthy donor gives $1 now, he saves himself 35 cents in taxes he would otherwise owe, with no limit to the savings. Under the Obama plan, this same wealthy donor would save himself only 28 cents in taxes. Not bad, but if you compound that difference over, say, $1 million, that is some serious coin: $70,000.

Nonprofits recognize that this will hollow out their annual fundraising efforts, but this is where Obama can be equal to his rhetoric about doing the right thing for the country, even when it hurts him politically. This would infuriate even Warren Buffett, who has magnanimously offered to pay more in income taxes even though he actively (and legally) shelters much of his wealth from taxes by donating it to charity — all the while getting a tax break unavailable to his assistant.

I wish the president would show that spine he had during the health care reform debate and say: “You know what? I don’t care if this hurts Warren Buffett. There comes a time where rich people simply don’t need more incentives to give their money away. If they need an extra 7% write-off to loosen up their charitable dollars, maybe they shouldn’t donate, after all.” To his conservative critics, he might even point out that it’s inherently un-conservative for the government to play such an unhealthy role incentivizing behavior that individuals should undertake on their own accord.

Ultimately, this isn’t really about the role of the government in charitable decisions; it’s about the deficit. The government is carrying $14 trillion in debt — as much as our annual economic output as a nation. If we need some low-hanging revenue to pluck, taxing charitable giving seems to be the most obvious place to look.

And while we are at it, let’s take a closer look at the charities and nonprofits themselves. They operate as nonprofits, so they avoid capital gains and taxes on their businesses, buildings, land holdings, cash, equities, bonds, and other property. They pay lower rates on mail service. They hold fancy parties. They spend money on advertising, marketing and, yes, speechwriters like me. They do virtually everything that large companies do — but they don’t pay taxes like corporations do.

Forget tax breaks for wealthy donors; the charities themselves are where the real money is. Just talk to any mayor of any decent-sized city in America — they all would love to tax charities. Consider New York City. Its two biggest landowners are the Catholic Church and Columbia University. Neither pays property taxes. They use the roads. They use the police. Why should they get a break on paying their fair share?

And then we can talk about those charitable endowments. Endowments never pay a dime in capital gains taxes. It’s as if nonprofits operate in the financial marketplace with a 20% head start over every other investor when it comes to returns. And for what benefit? Most endowments disgorge a puny share of their total assets each year to support actual charitable work. The rest is hoarded.

This isn’t just about tax fairness, it’s also about macroeconomics. Today, economists worry that the mortgage interest tax deduction has played a major role in the creation of the housing bubble that just popped. They’re right: If you can borrow money tax-free, you’re more likely to borrow more than is prudent.

The same is true for charitable giving. I don’t doubt that many nonprofits do great work, but do we over-invest in them? I wonder what it means that America’s fastest-growing sectors — health care and education — are dominated by nonprofits. Do these institutions contribute to our national vibrancy and prosperity the same way a profit-focused private sector does? I don’t think so. As a nation, we have a tax code that is very good at encouraging people to give away money. But we are forgetting how to make it.