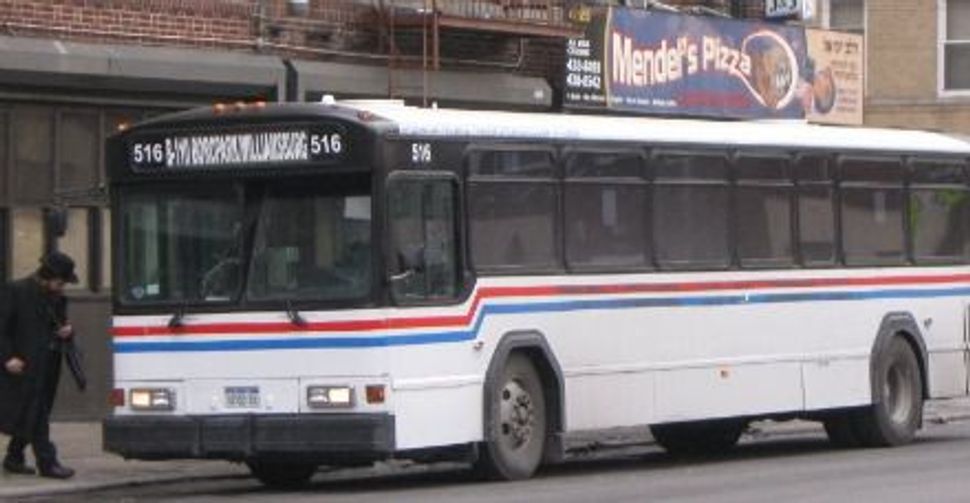 Not on the buses in Jerusalem or Brooklyn, not on the streets on Sukkot, and now not on the billboards, a contributor complained to the Forward’s blog, The Sisterhood. “Where,” she asked, “is it okay to be a woman?’

Before trying to answer the question, we’ll explain the references. In recent weeks, we’ve learned that some publicly sanctioned buses in ultra-Orthodox neighborhoods in Brooklyn have required women to sit in the back of the vehicle, reserving the seats in the front for men. If this sounds familiar, that’s because some public bus lines in Israel have operated this way for years. And when a member of the Jerusalem City Council recently petitioned the high court to oppose such gender segregation, she lost her job and her membership in the governing coalition.

In those same Brooklyn neighborhoods with the segregated buses, there were reports of signs in Yiddish posted during Sukkot urging women to step aside when a man approaches. (In other Haredi enclaves, men and women walk on separate sidewalks.) And in Jerusalem, a nonprofit civic organization is tracking “the disappearance of women from public life” — including a dramatic absence of women on billboards and in local newspaper and magazine advertisements. For instance, reports The Sisterhood’s Renee Ghert-Zand, the public safety campaign for Jerusalem’s new light rail only features men and boys, and posters for a women’s running race did not include any images of, well, women.

If these incidents were confined only to the inner workings of Haredi communities, whose fundamentalist religious practices lead to extreme separation of the sexes, then there’s little the public can do or say. That such segregation has become increasingly entrenched in Haredi schools, synagogues and homes is, frankly, their choice. But the examples above are not in the private sphere. Buses operating on a public route, citizens walking down a public street, government-funded public safety campaigns — all should be available equally to men and women, and reflect that reality. It’s hard to believe we even have to make this argument in the 21st century, let alone in 21st century America and Israel.

Combined, these incidents signal a trend, not a social upheaval. Israel remains a strongly egalitarian society in so many arenas, including governance, where both its major opposition parties are now run by women. (The same cannot be said for the United States.) And in the United States, social and legal standards outlawing segregation quickly kicked in once the buses and the signs became news.

But it’s not being alarmist to note with concern where this trend is moving. Relegating women to the back of the bus, forcing them to walk on separate sidewalks, excising them from all public appearance is not Torah or Talmud. It’s abuse of power, and it has no place in a modern, just society.