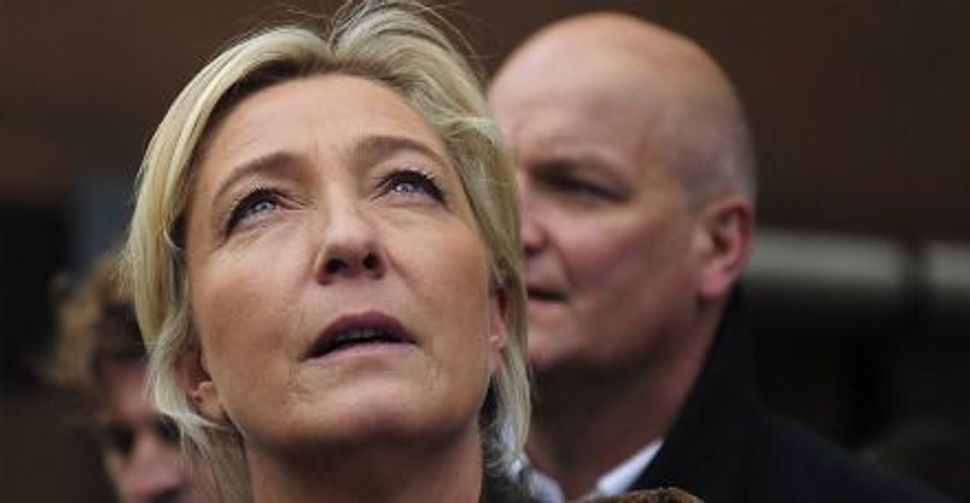 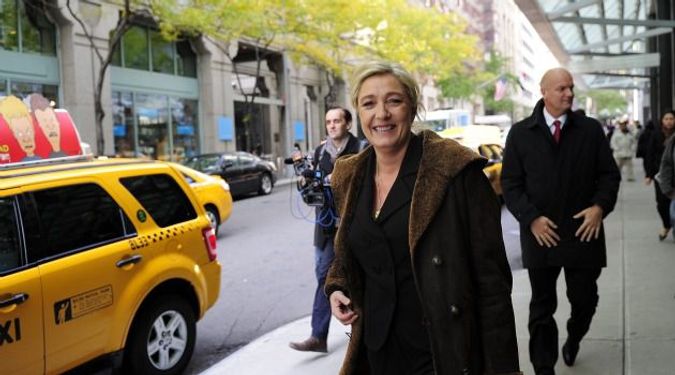 Madame No Name: Marine Le Pen, leader of the far-right National Front party hasn?t received much attention on her trip to the U.S. Image by getty images

She came, she saw, and she was ignored.

Marine Le Pen, the leader of France’s National Front has not conquered America as she reaches the end of her five-day official trip. In fact, she has scarcely raised a ripple on the surface of the American media. The New York Times has ignored Le Pen’s whirlwind tour, while The Washington Post could not muster its own staff to cover the event. With the exception of The Huffington Post, Internet sites have scarcely been more attentive to the visit for a politician who represents a far-right wing party, yet nevertheless has a credible chance at becoming France’s next president.

The silence surrounding Le Pen’s visit to the U.S. raises a few questions. For literary types, there is the surreal aspect to this official tour: perhaps only André Breton could do justice to Le Pen’s “official” meeting at the UN yesterday attended by only five representatives (including those of Uruguay, Armenia and Tobago). Political satirists might debate how Coluche would have staged the effort by Le Pen’s handlers to bar a posse of French journalists from entering the United States Congress? Lovers of conspiracy theories will likely dwell on Le Pen’s breakfast meeting with Richard Hines. When not serving as a Washington lobbyist for bloody-minded dictators, Hines edited a magazine, Southern Partisan, devoted to the “Lost Cause” of the American Confederacy (and which bears a stark resemblance to the violent partisans of “L’Algérie française”).

And what about the philosophically-inclined? They might ask if a French politician falls on her face in America and no one hears it, does she make a sound? But such a question is of course irrelevant. Le Pen did not come to conquer America; she instead came to conquer France. Or, at least, convince enough undecided French voters in 2012 that she has enough international credibility in order to sign a five-year lease on the Elysée.

This is a question the French, of course, will decide on their own. It may well be that Le Pen will benefit from her short meeting on Thursday with Israel’s ambassador to the United Nations (despite the subsequent announcement from the office that the meeting was based on a “misunderstanding.”) Yet no matter how brief or misrepresented this meeting was, it marks a milestone in Marine Le Pen’s effort to distance “her” FN from the anti-Semitic movement she inherited from her father, Jean-Marie Le Pen.

But what most strikes an American observer is how closely Le Pen’s campaign and politics resemble those of Herman Cain. Sure, one is black and the other white, one is a guy the other a gal, one is American and the other French, but if we dig a bit deeper they are remarkably similar.

Both Le Pen and Cain boast brutal policies in regard to the issue of illegal immigrants whether they speak Spanish or Arabic. Just as Le Pen’s makes political hay with her denunciations of the Muslim “occupation” of France, Cain plays the immigrant card as well. When Cain was condemned for the “insensitivity” of his remarks concerning an electric fence along the border with Mexico, he replied the immigrants were insensitive by entering our country (and, I guess, insisting on cleaning our toilets, picking our fruit and collecting our garbage). Similarly, Le Pen demands that North African migrants trying to land on European shores should be “pushed back into the sea.”

Both Le Pen and Cain denounce the power of national and supranational financial institutions, and both offer simplistic and disastrous solutions to the economic malaise of their respective countries. Le Pen’s “retour au franc” is, in reality, little different from Cain’s 9/9/9 which proposes to scrap the existing tax code and replace it with a 9% personal income tax, a 9% business tax and a 9% sales tax. Just as Cain’s proposal horrifies even conservative economists like Bruce Bartlett, who served as George W. Bush’s economic advisor, Le Pen’s insistence that France retire from the euro is condemned as catastrophic by economists across the political spectrum.

And herein lies the most remarkable parallel between Le Pen and Cain. No matter how outrageous or improbable their proposals, no matter how slapstick and bizarre their campaigns, both presidential candidates continue to rise in the polls. Le Pen has reached 19% of popular support in the latest Ipsos poll in France. In Cain’s case, his campaign has had even more success raising money, and Cain has won even more popular support, in the wake of the revelation that two women who worked under him in the 1990s accused him of sexual harassment.

Why? In part, both Le Pen and Cain exploit the distaste and frustration with traditional politics felt by a growing number of American and French citizens. These same supporters, faced by overwhelmingly complex problems, convinced that their countries are somehow slipping away from them, find solace in the simple nostrums offered by these ostensibly anti-establishment figures. And, of course, every attempt by politicians and the “official” media to dissect the economic, political and social prescriptions offered by Le Pen and Cain only comforts the popular belief that these candidates do have the right answers.

In the face of this perverse logic that fuels these “protest” candidacies in both of our countries, it may be that our only response is Samuel Beckett’s: “I can’t go on. I will go on.”