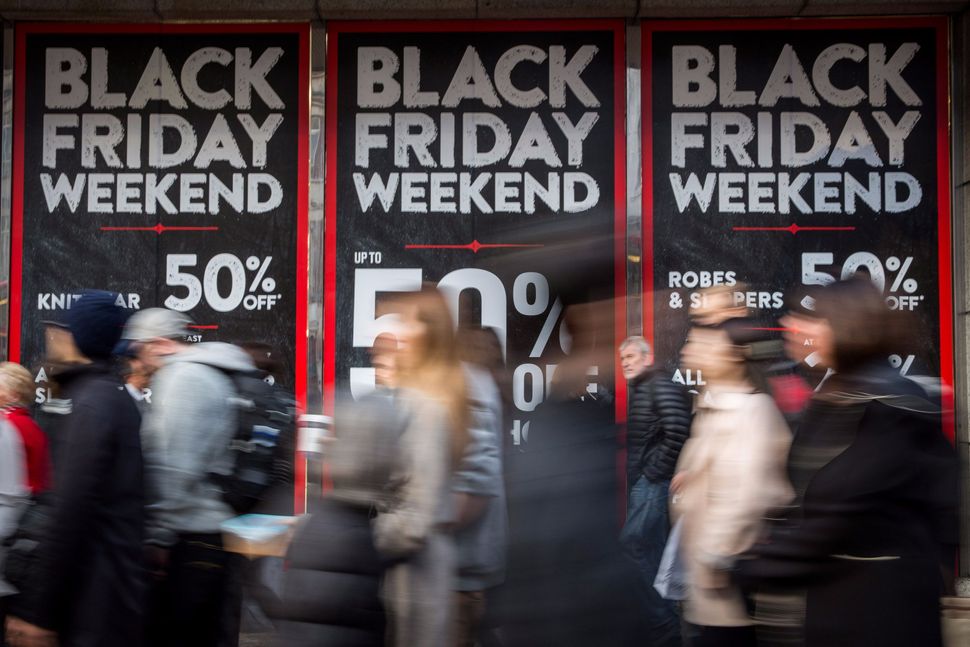 Thanksgiving and Black Friday come every year, in good economic times and bad. Forward editor-in-chief Jane Eisner explained in 2011 why Americans should not be cajoled into working on a day that’s supposed to be all about family.

Macy’s flagship store in New York’s Herald Square and the more than 800 branches around the country opened just after the clock struck midnight on Black Friday. So did Target and Best Buy. Wal-Mart got a jump on its competitors by opening at 10 p.m. on Thanksgiving Day, but Toys R Us beat them all by starting its Christmas sales that day at 9 p.m., three hours before Black Friday even officially began.

Eager shoppers barely had time to put away the turkey leftovers before heading to the mall to buy, oh, an iPad for a two-year-old.

But it’s not the shoppers who are of concern here. It’s the workers in those stores who were asked, or in some cases forced, to curtail their Thanksgiving holiday to serve the insatiable American appetite for a bargain (real or perceived). Facing another challenging holiday season, many retailers evidently decided that they had no choice but to keep up with or surpass their competitors by accelerating the race for the almighty Black Friday customer, the one who lifts the yearly margin from red to black and helps save the American economy.

It’s time to ask: at what cost? When does commercialism without borders or restraints go beyond a momentary boost to quarterly profits and damage the national soul? We may be perilously close to that point if the unspoken agreement to keep Thanksgiving as the American Shabbat is broken.

There was a time when most colonial Americans were forced to honor the Puritan Sabbath — under the so-called “blue laws” of the 1700s, severe punishment could be rendered for even a simple misdeed. Sunday restrictions lasted well into the 20th century, and especially hurt Jewish shopkeepers who observed their own Sabbath on Saturday, and had to forego a weekend’s worth of commerce or risk heavy fines for opening on a Sunday. Bit by bit, states dropped their prohibitions, to increase tax revenues more than anything else, although there still are places where one cannot purchase alcohol on a Sunday (Mississippi), buy a car (Illinois), or hunt (most of West Virginia).

When then-Gov. Mitt Romney of Massachusetts relaxed his state’s ban on Sunday liquor sales in 2003, some religious leaders bemoaned the move. “We see an unfortunate slippage into every day being the same,” the head of the Massachusetts Council of Churches told the Christian Science Monitor. “Consumerism…is in danger of becoming an idolatry.”

Now that unfortunate slippage has seeped into Thanksgiving. Unlike the Sabbath, unlike Christmas and Rosh Hashanah and Ramadan, this is the one holiday welcome to all Americans, its rituals pliable enough to be adopted by any tradition. Of course, hospitals and newsrooms and gas stations and even the stray coffee shop stay open, as a service to the public, but the overall quiet of the day creates a national calmness, like Jerusalem on Shabbat or New England after a mighty snowfall.

Happily, resistance to this commercial move is gaining momentum. Anthony Hardwick from Omaha, Neb., a Target parking attendant, began an online petition after learning he was required to report to work at 11 p.m. Thanksgiving Day for a 10-hour shift. “A full holiday with family is not just for the elite of this nation — all Americans should be able to break bread with loved ones and get a good night’s rest on Thanksgiving!” he wrote, and nearly 200,000 signatures agree.

It’s not that Hardwick was making an outrageous request. His petition merely asked that Target return to its original Black Friday opening hour, at 5 a.m.

So that’s what it has come to for American workers: a plea to start the day after midnight but well before dawn. Surely, the self-restraint and communal values that once shaped the marketplace could make a modest return one day a year. Dial down the commercialism on Thanksgiving. There will still be plenty of shopping days left.