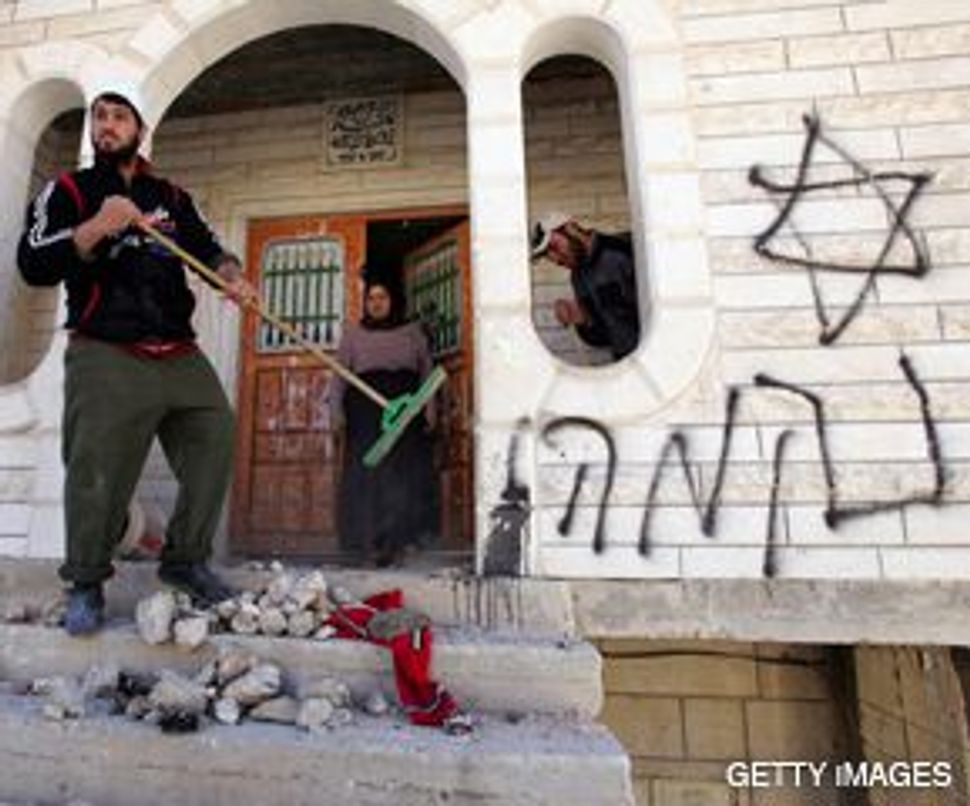 CLEANING UP: In the wake of a rampage by Jewish settlers, a man sweeps the porch of a Palestinian home near Hebron defaced with graffiti of Stars of David and the Hebrew word for ?revenge.?

Hebron this month resembled nothing so much as Jerusalem in the summer of 70 C.E. Then, as now, Jewish extremists battled the duly constituted leadership of the people, taking the law into their own hands and throwing morality to the wind. When Jewish hatred desecrated Jerusalem that fateful summer 1,938 years ago, the Jewish people lost their Temple and were exiled from their capital for centuries. 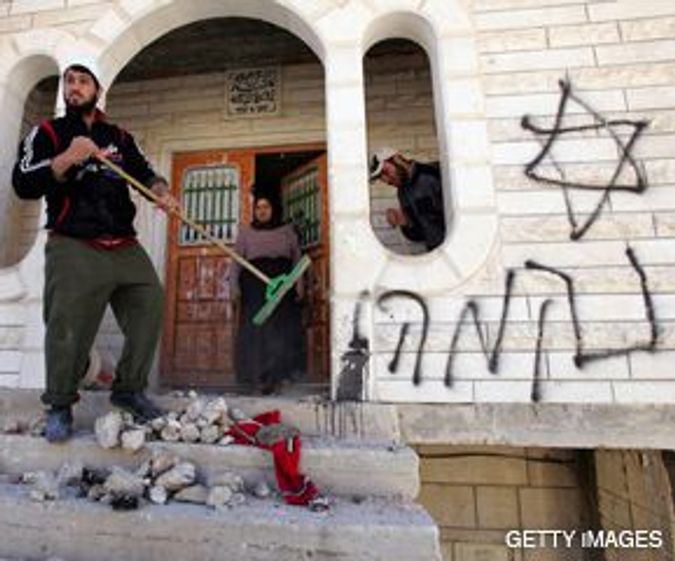 CLEANING UP: In the wake of a rampage by Jewish settlers, a man sweeps the porch of a Palestinian home near Hebron defaced with graffiti of Stars of David and the Hebrew word for ?revenge.?

As a religious Jew, the violence in Hebron pains me deeply. Hebron’s center is the Cave of Machpelah, the tomb of Abraham, Sarah, Isaac, Rebecca, Jacob and Leah. King David ruled there for seven years before moving his capital to Jerusalem. Hebron is one of the four holy cities in the Land of Israel where Jews maintained a presence for centuries before the dawn of Zionism. And, in modern times, it saw the martyrdom of 67 Jews, who were murdered in 1929 by rampaging Muslims incited by false rumors that the Jews intended to defile the Muslim holy sites on Jerusalem’s Temple Mount.

I last visited the Cave of Machpelah in the spring of 1987, when I was a reserve soldier in an infantry unit deployed to keep order in Hebron. Our work in Hebron consisted of protecting four enclaves of Jewish settlement in the otherwise Muslim city. This was before the outbreak of the first Intifada later that year, so the city was quiet and the Arabs mostly docile.

Most of the Jews we encountered there, however, treated the Arabs rudely; if we soldiers protested, they responded to us with condescension. They didn’t hesitate to tell us that they considered us traitors to the great truth they represented. As far as they were concerned, the Jewish state was merely an instrument for accomplishing their messianic agenda of expelling the Arabs and re-creating a theocratic Jewish kingdom. Whatever the state, its citizens and its soldiers did that delayed or frustrated that goal was, in their view, illegitimate and criminal.

I visited the Tomb of the Patriarchs in the company of a fellow soldier, newly religious and a student at the yeshiva located adjacent to our base in the center of the city. Other soldiers from our battalion stood guard at the gates and inside.

The shrine was divided into sections for Muslim and Jewish worshippers. I knew that Muslim clerics had, for many long years before Israel conquered Hebron in 1967, forbidden Jews to enter the cave’s inner sanctum. Thereafter, a regime of ostensible co-existence had been established by the army, which served as a buffer between two groups made up largely of people who were looking for an opportunity to expel the other from the holy site, which they wanted exclusively for themselves.

The tension in the air was so thick it overwhelmed the awe I felt at treading in this holy precinct. I found myself muttering my prayers without spirit, in trepidation.

Seven years later, Baruch Goldstein, a Jewish doctor from the adjacent Jewish town of Kiryat Arba, donned his reserve officer’s uniform, took his semi-automatic IDF rifle and walked into the Muslim sanctuary. He sprayed the worshippers there with bullets, killing at least 29 and wounding dozens of others. This act of sacrilege left me unable to even think of praying again at the Tomb of the Patriarchs. Instead of bringing the Jewish people closer to this historic site, he had made it a site of national shame.

The actions of the young delinquents who attacked Israeli soldiers and Palestinian civilians earlier this month were not murderous like Goldstein. But they acted in the same spirit.

Leaders of the West Bank settler community sought to disassociate themselves from what they called a small coterie of wayward kids. Yet these hooligans are the products of a national-religious educational system that has, in all too many schools and seminaries, taught that all means are justified to achieve the goal of Greater Israel, and that the law of the land should be accorded no respect wherever it runs counter to the precepts of the Jewish religion as the settlers understand it.

The settlers in Hebron, and the teenage riffraff who joined them to defend the disputed house that was the epicenter of the recent confrontations, say they are asserting the Jewish people’s claim to its second-holiest city. The opposite is true. Each act of wanton destruction committed against Palestinians, each stone thrown at an Israeli soldier or policeman, is a blow against Jewish rights in Hebron.

In the year 70, Rabbi Yochanan ben Zakkai realized that God had abandoned his holy city when it was overrun by profane and murderous Jews. He abandoned it, too. I will not pray in Hebron as long as it remains a symbol of violence, lawlessness and intolerance.