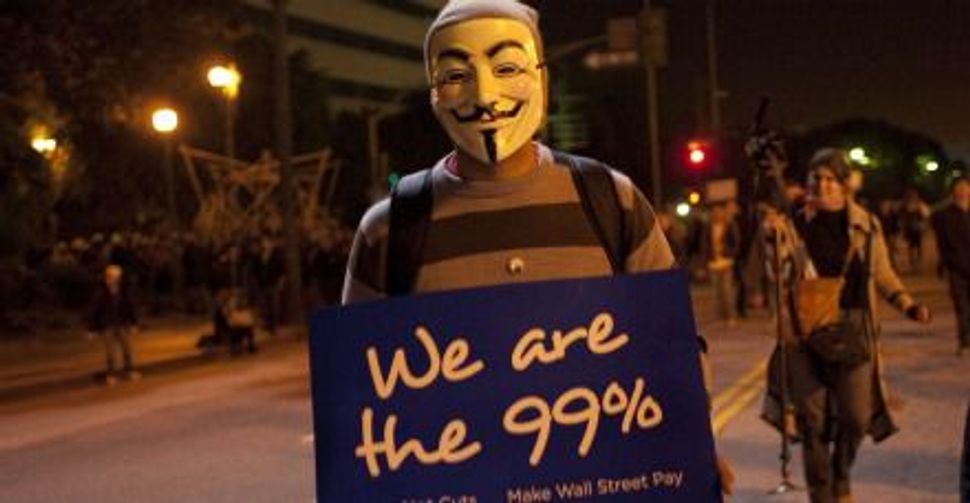 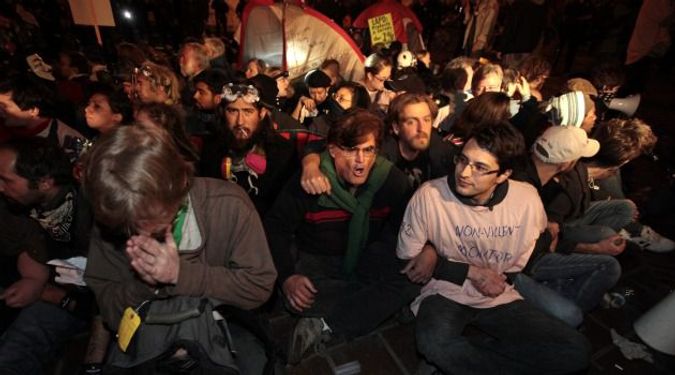 Rituals of Protest: Occupy Los Angeles protesters prepare to be arrested by police intent on clearing them away. The nationwide protests have combined confrontation with democratic consensus.

At the end of a long day of peaceful demonstrations in Oakland this past November, a few hundred protesters — many wearing masks or covering their faces with bandanas — massed for a night of rage, smashing windows, chucking rocks and sparking bonfires. In the aftermath, the city’s police chief described the perpetrators as “generally anarchists and provocateurs.”

Across the continent, in New York City, I joined more than 1,000 protesters in a march from Zuccotti Park to police headquarters to express our solidarity with the people of Oakland. In front of the grim, brick facade of 1 Police Plaza, we created a human microphone, relaying speeches, sentence by sentence, to those crowded behind us. When audience members agreed with a speaker’s sentiments, they performed a gesture of approval, waggling their fingers above their heads. For disagreement, there was an even simpler expedient: We just refused to repeat the words, shutting off the microphone.

These two rituals of protest have largely defined the national Occupy Wall Street movements: on the one hand, tetchy and often violent confrontations with the police; on the other, a democratic commitment to true consensus. These also happen to be the hallmarks of anarchism, a political philosophy with roots dating to the 18th century, which is currently experiencing its widest florescence in the United States in nearly 100 years.

Jews were deeply involved in the movement’s previous heyday. In the 1880s and ’90s, immigrants from Russia or Eastern Europe carried their anarchist beliefs with them to New York City. “Among Jewish radicals,” Vivian Gornick writes in a recent biography of Emma Goldman, “none were more dynamic than the anarchists, who in their unaccommodating view of capitalist reality often struck the note most emotionally satisfying.” In 1890, the anarchist periodical Freie Arbeiter Stimme — the Free Voice of Labor — began publishing in Yiddish. (In 1898, this newspaper’s forebear, the Forverts, was referred to by The New York Times as “the Anarchistic organ.”) And by the turn of the 20th century, New York City’s Lower East Side was an international center of the movement, boasting such world-renowned Jewish anarchist leaders as Goldman, Alexander Berkman and a host of others. “They were revolted by the entire ethic of capitalism that they found here in the United States,” historian Paul Avrich has said. “So what they did was to replace this world with a counter world — American culture with a counter culture — and they began to establish their whole anarchist culture.”

But for most Americans, anarchy was — and remains — just a synonym for chaos. “Bombs and anarchists are inseparable in the minds of most of us,” a journalist wrote 100 years ago. “Mysterious destroyers of life and of property, merciless men who have pledged their lives or their knives or their guns to some nefarious cause or another.”

From the 1880s until the Russian Revolution, the anarchist assassin was a cultural archetype that could be found in the pages of the penny press or the novels of Joseph Conrad, Henry James and Fyoder Dostoevsky. Responsible for the deaths of tsars, prime ministers and presidents, these radicals posed a terrifying threat to established authority. In societies such as tsarist Russia, where civil rights hardly existed, they turned to violence as the only possible form of protest. When they imported these tactics to the West, American and European leaders reacted in panic. “When compared with the suppression of anarchy, every other question sinks into insignificance,” Theodore Roosevelt warned Congress during his presidency. “The anarchist is the enemy of humanity, the enemy of all mankind.”

As the great majority of the Occupy Wall Street participants will attest, however, anarchism is no more inherently violent than any other political idea. From the Greek root an-arkhos — without a leader — the idea merely poses the ideal that self-government is government enough. Of all the many philosophies that emerged from the Enlightenment, it is the purest and most hopeful. Its tenets rest on the assumption that humanity is perfectible, that all can prosper, that each is worthy of trust.

It is a tradition that found a comfortable home in America, where Henry David Thoreau was an anarchist avant la lettre, as were so many other pioneering and self-sufficient citizens in the nation’s history.

The heyday of American anarchism began in 1886, when four practitioners of the philosophy were executed after a bomb had killed eight police officers during a rally in Chicago’s Haymarket Square. In 1901, President McKinley was assassinated by a disturbed young anarchist. Immigration from Eastern Europe and Russia brought a generation of notorious anarchist leaders, many of whom were Jewish: Johann Most, Berkman and — most notorious of all — Goldman. Together they built a mass following, traveling the country and speaking to crowds of thousands.

But the Russian Revolution rendered the movement largely irrelevant. The Bolsheviks’ success was a triumph of hierarchy that seemed to discredit anarchist notions of consensus and debate. Within a few years, communism had supplanted anarchism as the font of all American political paranoia. During the succeeding decades, the conflict between the Soviet Union and the United States largely divided left and right into two opposing camps. But the end of the Cold War brought a final disillusionment with Soviet-style state socialism, and opened a new possibility for anarchist organizing and practice. This was first seen in this country during the anti-globalization movement of the 1990s.

Historically, anarchism has been most appealing to those who, like Jewish radicals in Russia, found themselves without any representation. Unskilled laborers shunned by the organized trade union movement, the homeless and unemployed — these were the constituency for the ideas of its orators. If today’s participants in the Occupation movement feel themselves to be politically unrepresented, if they find that their concerns and ideas do not get voiced within the two-party system, then it is little surprise that they are participating in that same tradition.

The past two months of the Occupy Wall Street movement have revealed the exhilarating potential of anarchism as a practical form of governance. At Zuccotti Park, and in the other encampments nationwide, discussions as picayune as the proper management of laundry and as significant as the philosophical implications of civil disobedience were conducted through improvised methods of participatory democracy.

Yet, this time has also been marked repeatedly by violence. As in the past, the preponderance of force has been used by the police — most spectacularly in their military-style raids on Zuccotti Park and the encampment in Oakland. The movement has moved into a new phase now, but confrontations between authorities and occupiers may continue. The likelihood of further bloodshed rises as a chilling possibility.

This generation of anarchists again faces a dilemma that challenged their predecessors. It is a question that puzzled Jack London, the novelist, a century ago. “Of all paradoxes,” he wrote then, “is there one that will exceed the paradox of our anarchists — men and women who are so temperamentally opposed to violence that they are moved to deeds of violence in order to bring about, in the way they conceive it, the reign of love and cosmic brotherhood?”