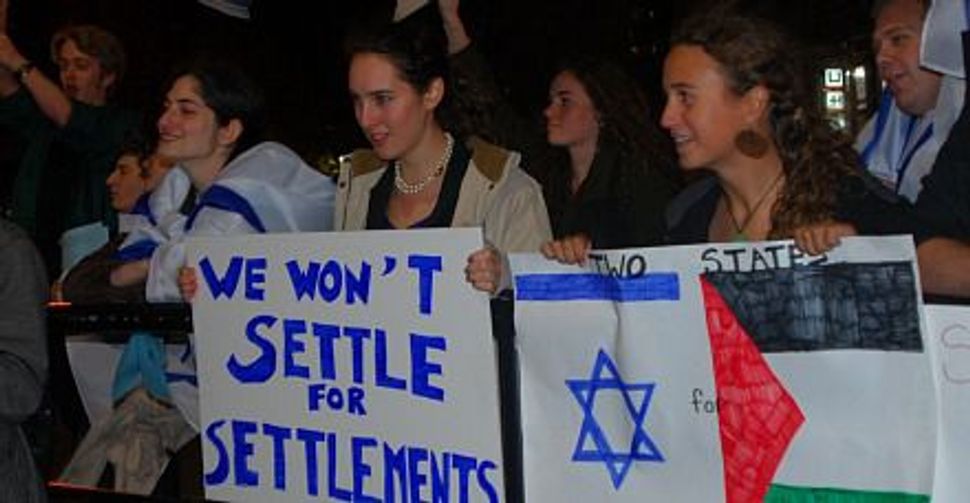 Image by courtesy of j street u 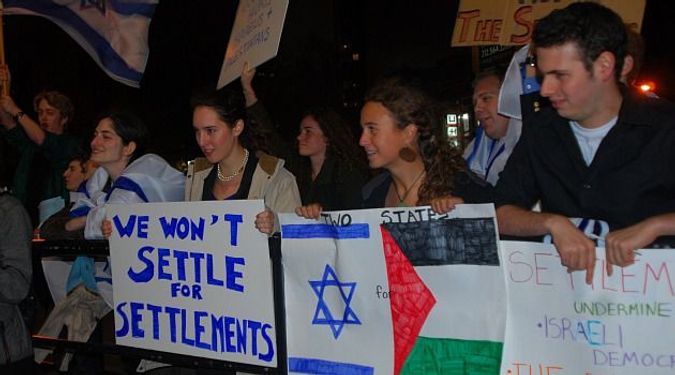 Grounds for Protest: J Street U members display Israeli flags at demonstration against Israel?s settlement policy. The liberal group was barred from joining University of California at Berkeley?s umbrella Jewish Students Union. Image by courtesy of j street u

Students at the University of California, Berkeley, have stood at the forefront of progressive movements throughout history, from free speech, to civil rights, to the recent protests against tuition fee hikes. Student activists at our school, many of them Jewish, have displayed great political courage, following in the footsteps of other Jewish leaders who have led similar social justice struggles; however, the body claiming to officially represent Jewish students on campus has decided that on one issue particularly close to our hearts, progressive voices will not be tolerated. That issue is Israel.

UC Berkeley’s Jewish Student Union, the Hillel-sponsored umbrella organization for Jewish student groups on campus, is supposed to be the democratic forum representing organized Jewish life at the university. The JSU general board, however, is disproportionately controlled by leaders of the group Tikvah: Students for Israel, who are committed to a single goal: imposing a right-wing agenda regarding the Israeli-Palestinian conflict on campus.

Tikvah, while an important voice on campus, is one of four Israel groups that make up Berkeley’s Hillel. While Hillel opens its doors to a plethora of enriching experiences for Jewish students on campus, members of Tikvah use the JSU to slam them shut in the face of progressive students.

On November 16, the JSU voted to deny membership to Berkeley’s chapter of J Street U, the college arm of J Street. (It takes a two-thirds vote to approve membership; nine voted for, 10 against, and two abstained.) Instead of creating a broad and comprehensive discussion about the nature of J Street U, members of Tikvah dominated the discussion and framed J Street U as an anti-Israel, duplicitous organization while ignoring all evidence to the contrary.

J Street U’s first activity at the UC Berkeley campus was in the spring of 2010, when it joined the opposition to the divestment campaign (a strange way for an “anti-Israel” organization to introduce itself to our campus). Last spring, J Street U brought Assaf Sharon to campus. Sharon is a founding member of the Sheikh Jarrah Solidarity Movement, an organization that works to prevent evictions of Palestinians from their homes in East Jerusalem. During the JSU vote, Tikvah members portrayed Sharon as an advocate of kicking Jews out of their homes in “our Jerusalem,” a misleading comment if one claims to support a pragmatic framework for a two-state solution.

They argued that no one hosting such a speaker could possibly be supportive of the Jewish state, forgetting to mention that the Sheikh Jarrah Solidarity Movement has the unbridled public support of such famed “anti-Israel” advocates as acclaimed Israeli author David Grossman, former speaker of the Knesset Avraham Burg and Bernard Avishai, author of the 2008 book “The Hebrew Republic.” They also ignored J Street U’s sponsorship of an event featuring Ami Ayalon (former head of the Shin Bet and former commander of the Israeli navy), clearly a rabid “anti-Israel divestnik.”

We founded J Street U at Berkeley because we are tired of the hard-liner politics on both sides and are inspired by student leaders across the nation progressively changing the conversation on Israel in their communities and taking bold steps in the American political arena. We are also inspired by our Israeli counterparts who are working to change the situation on the ground.

The Berkeley JSU’s vote is emblematic of a larger trend. Even as pillars of the American Jewish establishment recognize the need to include J Street U and others like us in the broadening tent of pro-Israel advocacy, those on the right double their efforts to shut us out. Similarly, as nongovermental organizations and activists decry unjust government policy, the Israeli Knesset passes laws to limit their funding and stifle their right to free speech.

We believe that unless our community actively opposes the occupation and works toward a comprehensive Israeli-Arab peace deal, Israel’s future is at stake. We believe that unless progressive voices are recognized, the only voices left will be shrill and extreme, empowered by their reactionary, hard-liner counterparts in Israel.

We often ask ourselves, “Why are we fighting to be part of a community that doesn’t want us?” Some have stopped asking the question and have simply walked away. We refuse. We demand a place in this community. We are still here.