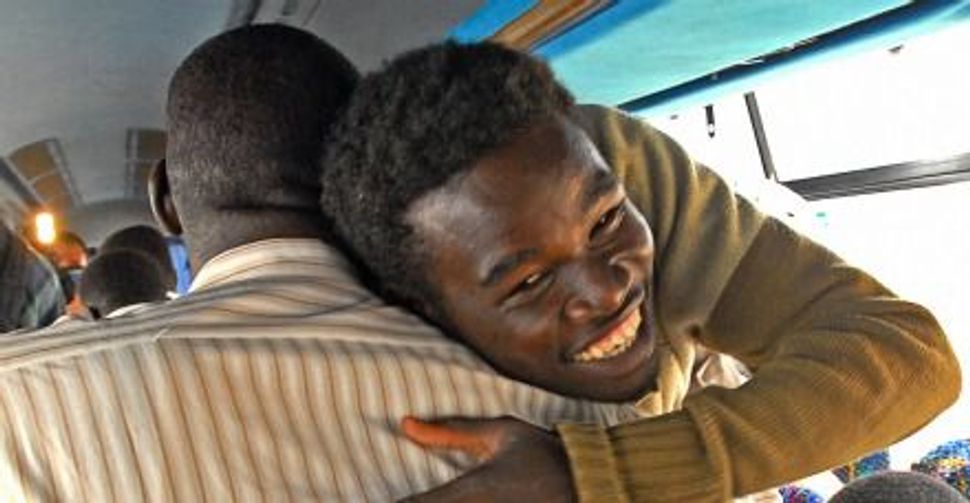 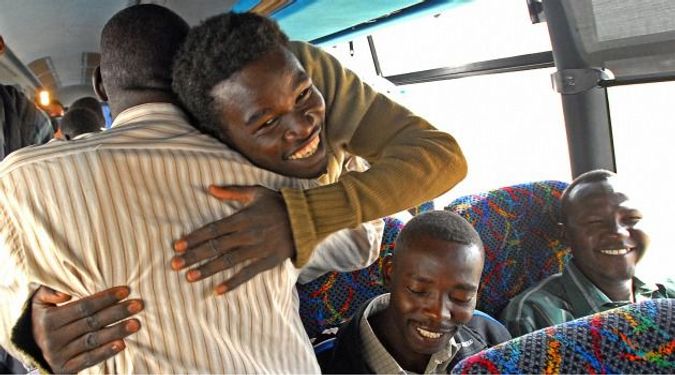 Uncertain Futures: Darfuri refugees are happy to arrive in Israel. Things get tough as soon as they step off the bus. Image by getty images

I intended to write about an Israel too often overlooked. I wanted a feel-good story for a change, a story that did not include the word “however.” And I had, so I thought, exactly such a story, the truly inspiring story of a 30 year-old man — we’ll call him Hamza — with whom I spent an evening last month in Israel, a man you may have seen if, improbably, you’ve recently hung out at the refugee clinic at Tel Aviv’s Central Bus Station. He’s the one who volunteers there as an interpreter between recent arrivals, asylum seekers from Africa, and physicians, also volunteers.

Hamza has been in Israel for three years now. He is originally from a small town in north Darfur, a town lacking in education, health care and security. When he finished high school in Kinanah, a week’s journey from his home, he was admitted to Alzaeim University in Khartoum. But the war in Darfur broke out during his second year of study, in 2003, and he set out to return to his family’s home.

While on his way, he was arrested and then imprisoned — and tortured — for four months. There’s much more, including his eventual graduation from the university with a degree in urban planning, but you get the general idea. After several arduous trips back home and continuing persecution in Khartoum, he decided to flee Sudan. The cost of being smuggled into Europe was well beyond his meager means, the $600 he’d saved up. An African country? He’d be deported back to Sudan. That left him without alternatives — until he remembered Israel. In his words: “I knew that the Jewish people were also under extermination in Germany and so I thought that if the Israelis will not help me, then no one would help me.”

A boat to Aswan, then a Bedouin smuggler who connected him to a group traveling to Israel via the Sinai desert. After crossing the desert surreptitiously, they raced for the fence separating Egypt and Israel. Egyptian soldiers tried to gun them down. Hamza and his comrades crossed the fence and found the nearby Israeli military camp; they were held in prison for 54 days. Finally Hamza was released, in Beersheba, from which he made his way to Tel Aviv.

Today? Hamza gives bi-monthly lectures on refugee rights to government personnel and participates in the work of the Israel Section of Amnesty International, helping orient new arrivals from Darfur on matters large and small. To make ends meet, more or less, he also works when he can as a hotel cleaner, as a dishwasher, as a welder for a construction company.

Hamza has improbably managed to remain optimistic, to hold onto his hopes and dreams — especially his dream of higher education. He’s been accepted to and given a generous scholarship by the Interdisciplinary Center in Herzliya, and if he can put together the additional funds he’ll need, he’ll doubtless succeed.

Alas, here it comes: However. According to Amnesty, there are 42,500 asylum seekers in Israel, Hamza among them; 26,000 are from Eritrea, 11,500 from Sudan (including Darfur). They live in limbo, ineligible for public health care, mostly able to work only surreptitiously at minimum wage jobs. Israel’s Minister of the Interior, Eli Yishai, has warned that “illegal immigration is an existential threat to the State.” He believes that only 0.01% of the “infiltrators” are refugees; the rest, he insists, are migrant workers.

But how can he know this, since appeals for asylum by Eritreans and Sudanese are simply ignored, not reviewed at all? Yet he says, “Even if it’s unpopular I will act to repatriate every infiltrator. We can’t be softies. It’s true that they come from Third World countries, but Israel cannot accommodate all of them.” (Since 1948, Israel has granted formal asylum to fewer than 200 applicants. Of the current 5,000 asylum seekers from other African countries, Israel in 2010 reviewed 3,366 applications. Six — .002% — were given refugee status; in 2009, France recognized 63% of Eritrean asylum seekers as refugees, Switzerland 60% and Germany 82%.)

Now there’s a new proposal by Prime Minister Netanyahu to tackle the issue. His plan calls for completing a fence being constructed along the Egyptian border within a year, expanding the Negev-based Saharonim detention facility in order to increase its capacity from 2,000 to 5,400 and building an adjacent facility with a capacity of 10,000; a separate bill calls for an increase in mandatory detention to a minimum of three years.

Knesset Speaker MK Reuven Rivlin has said “Since we are obligated to the non-deportation of the refugees” — international law is crystal clear on this, forbidding the return of refugees to their home countries if they will be endangered there — “we have no choice but to reduce the temporary work permits issued to foreign workers in favor of giving work permits to refugees.”

That’s the voice of decency and good sense speaking, but it is not enough, given the drift of things, to warrant another “however.”