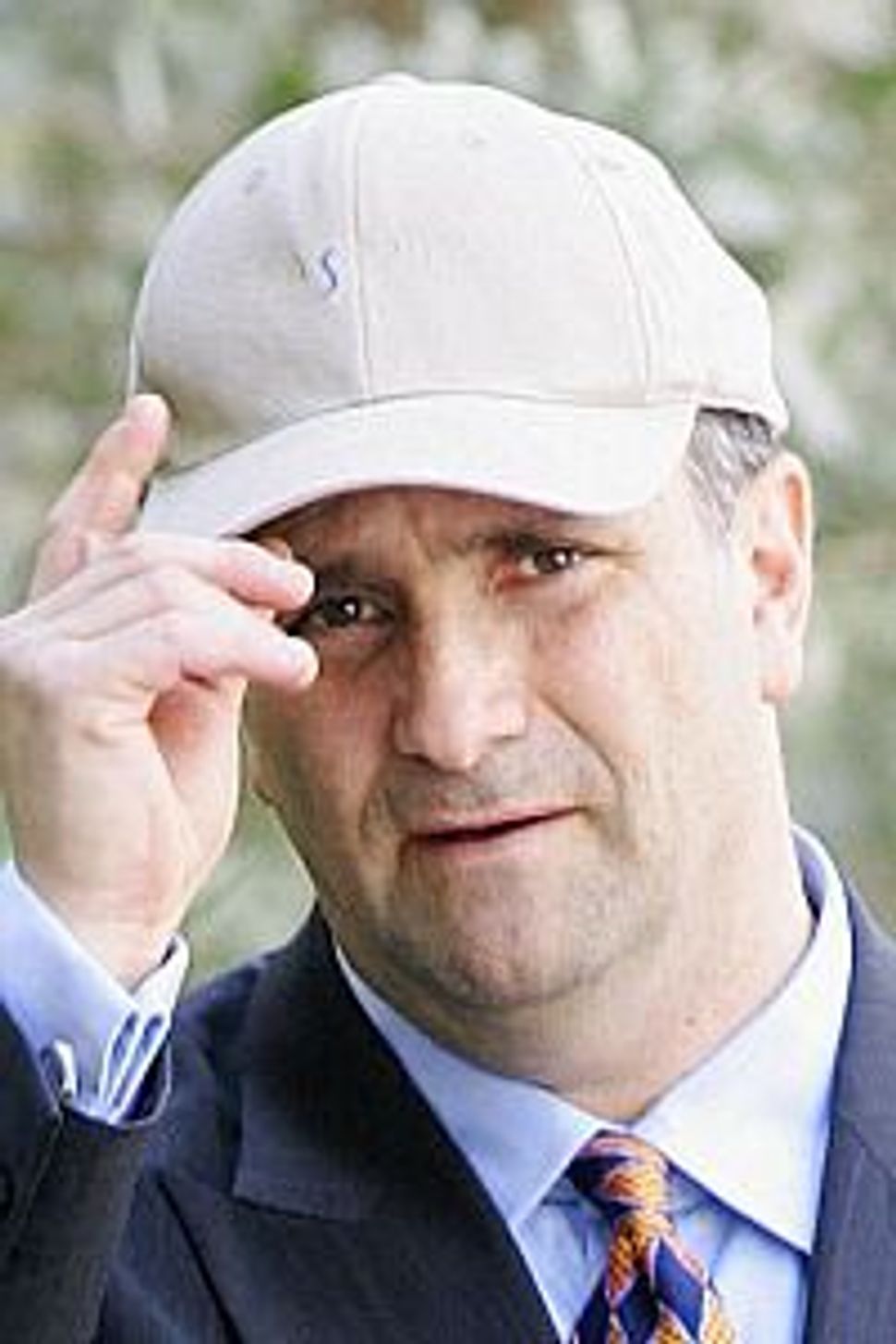 When lobbyist Jack Abramoff appeared in federal court, where he was eventually convicted of mail fraud and conspiracy, he faced a sartorial dilemma.

Abramoff, an Orthodox Jew, wondered whether he wear his kippah and risk smearing the Jewish people with his transgressions? Or should he cover his silver mop with a fedora, which would diminish his religiosity in the public eye? In the end, Abramoff went with the fedora, a look, he said, that garnered him accusations of being a gangster.

Abramoff’s soul searching, which he details in his new book, “Capitol Punishment,” was of great interest to Rabbi Shmuley Boteach, the Orthodox pop writer and spiritual advisor to the stars. Boteach invited Abramoff, who got out of prison last year, to a chat in Manhattan Thursday night to talk about Abramoff’s Jewish identity, his crimes and punishment.

The take-away was simple: if Abramoff was ambivalent about expressing his Jewish identity during his sentencing, then he has decided to embrace it full-on as he seeks repentance.

Sitting in the front of a wood paneled room on the 10th floor of the Manhattan Jewish Experience on the upper West Side, Boteach acted the stern therapist to Abramoff’s strangely gregarious penitent.

Though the men had met in person for the first time that evening (could it possibly be coincidence they both wore matching electric purple ties?) they fell into an easy back and forth. Abramoff, looking tan and well rested, elicited vocal sighs of sympathy from the audience. At the end of night, he signed copies of his book and posed for pictures.

Boteach started off by ruminating on the nature of repentance in the Jewish tradition, which unlike Christianity, knows no perfect human being, he said.

“Judaism has no Jesus like figure,” he said. “Everyone wrestles with good and evil. I am not here to judge Jack Abramoff. He has been judged.”

And then, he turned to Abramoff: “What do you believe you did wrong?”

“That’s a tough question,” Abramoff replied, detailing the crimes for which he’d been convicted: mail fraud and conspiracy. But he asserted he and his wife gave 80 percent of their income—rather than the Torah-recommended 10 to 20 percent—to Jewish charities. He “evaded tax law” by telling his clients to give money they owed him directly to charity.

Abramoff, Boteach said, saw himself as Robin Hood. “It was like taking from the secular world to give to the sacred world,” Boteach said.

The crime for which Abramoff became a symbol of Washington corruption is his illegal lobbying of elected officials. The onetime pal of George W. Bush plied them with tickets to ball games, trips, and dinners. In Washington’s elaborate system of rules, Abramoff said he found himself flaunting the law, and thinking nothing of it. He admitted only stopping because he got caught.

“One of the things I learned was that there are no such things as little laws,” he told Boteach. “I fell. If I was not decapitated I would not be sitting here with you. I would be hosting a fundraiser. I now try to follow every rule.”

When Abramoff’s transgressions finally caught up with him, he started to realize the error of his ways.

“I realized God was speaking to me through some heavy blows,” he said. “I didn’t set out to desecrate God’s name. The media was writing about me as an Orthodox Jew.”

Now, Abramoff says he is ready to engage in teshuvah, or atonement, by advocating for the elimination of bribery in politics.

“Let me explain bribery,” said Abramoff. “It is best explained in the Talmud.” Then he launched into the story of a judge who, walking across a bridge, slipped, but was caught by a man who was to appear in his courtroom later that afternoon.

“You bribed me!” said the judge, who felt he could no longer adjudicate the case with the man who helped him. “Decent human beings feel a sense of gratitude when you do something for them,” said Abramoff, “Does a meal affect a congressman? They say ‘no.’ I say ‘yes.’”

To some, Abramoff seemed to be dissembling as he spoke of analogies between his own behavior and Biblical characters. Waiting in line to speak with Boteach was Rena Feiner, a 29-year-old therapist at a juvenile detention facility.

Feiner attended the event with her sister, thinking that it might give her new insight into her own line of work. She wasn’t convinced that he really had a commitment to repent.

“The thing that struck me was that it’s a personal journey he has to take,” she said. “I’m a tough critic as a therapist. You can’t fool me.”