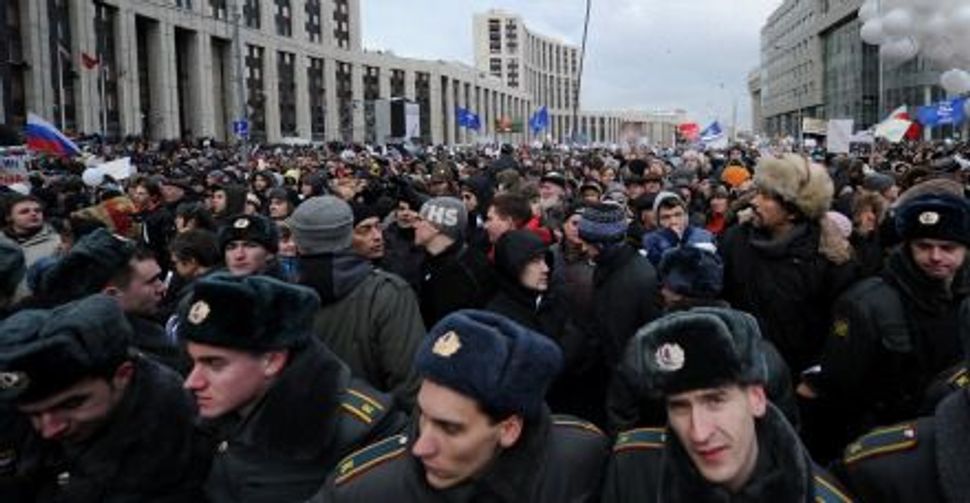 We know that Avigdor Lieberman is following events in Russia closely. After the December 4 parliamentary elections there were tainted by ballot stuffing and other violations roundly condemned by Western election monitors, Lieberman offered his own assessment of whether democracy had been harmed: “The outcome of the elections reflects the mood in Russia,” he said. “Maybe there were some errors in several areas in Russia…but that is not different from what happens in Israel in various Arab and Druze villages.”

In other words, no big deal.

But Lieberman and other members of the Israeli right should take a closer look at what is transpiring in the squares of Moscow. Russian citizens are fed up with feeling that they can be easily ignored by leaders intent on shutting off all avenues of dissent and political expression simply so that they can perpetuate their own power. The relative stability that Vladmir Putin and Dmitry Medvedev have offered Russia over the past decade is, ultimately, not enough. The tens of thousands of protesters who took to the streets in late December were saying that they refused to be complicit anymore while Putin and Medvedev perform a pantomime of democracy.

For his part, Putin has mocked and written off the protests, saying that they were directionless. “The movement is everything, the ultimate goal is nothing,” he said after a Christmas Day rally that brought what organizers claim were 120,000 people out into the bitter cold. The goal, though, is not that hard to ascertain. It’s written on large banners at each of the demonstrations: “A Russia Without Putin!”

The ultimate test will be the March presidential elections, when Putin has to face his population, a large part of which feels insulted by they way he has shut off legitimate debate and stunted any opposition before it can grow, all for the sake of staying in power.

Israel is, of course, not Russia. And when massive demonstrations took place there this past summer, they emerged out of a demand for greater economic equity, not out of a concern for democracy. In fact, those protests — already receding into distant memory — were a reminder of just how robust Israel’s democracy actually is.

But there are all too many signs these days that the right-wing parties making up the current governing coalition think that Israel might be just a bit too free. Knesset members from Lieberman’s Yisrael Beiteinu and Benjamin Netanyahu’s Likud have passed a law making it a civil offense even to call for a boycott. They have also recently proposed bills severely limiting the amount of foreign funding that could reach nonprofit organizations deemed “political” (read: any involved with human rights, social justice and civil liberties work), as well as heavily taxing these groups, presumably into nonexistence.

Former Israeli Supreme Court President Aharon Barak diagnosed the problem while speaking to Haaretz: “There’s a growing feeling that the parliamentary majority wishes to exert its power to the maximum, while freeing itself of the limitations a constitutional democracy imposes on the majority, thus while changing the rules of the game, before the game even ended.”

Changing the rules of the game. Does that sound familiar?

Now comes word that Israel’s Channel 10, known for its investigative reporting and for taking on powerful politicians like Netanyahu, will be shut down by order of the prime minister. The channel owes $11 million in debt, mostly to an official regulatory body, which has agreed to a delayed payment. But Netanyahu, upset about an unflattering report the channel aired looking into luxurious travels paid for by his wealthy friends while he was out of office, asked a parliamentary committee controlled by his party to vote to demand the money immediately. This means the channel will most likely go dark by the end of January, leaving exactly one independent Israeli channel, Channel 2, which is also battling economic difficulties.

“The fight over Channel 10 is partly a matter of revenge — Netanyahu wants to make them pay for what they did to him,” Nachman Shai, a Kadima Knesset member, told The New York Times. “But it is also part of a three-front struggle — over the courts, civil society and the media. The right wants to control every institution. Freedom of expression is at risk.”

This is more than just fierce Israeli political infighting. It is a systematic assault on what was a set of shared values, now cavalierly discarded for the sake of consolidating political power.

So we hope that politicians like Lieberman and Netanyahu turn to the streets of Moscow and see in these protesters what we do: the ghosts of Israel’s future. Let the Russian demonstrators provide a cautionary message to them about what happens when citizens fear the erosion of their ability to dissent and challenge leaders who are supposed to be elected. They will rise up. If this past year has taught us anything, it is that they always do. And in the end, they will demand an Israel without you.