Can Santorum Win Over South Floridians? 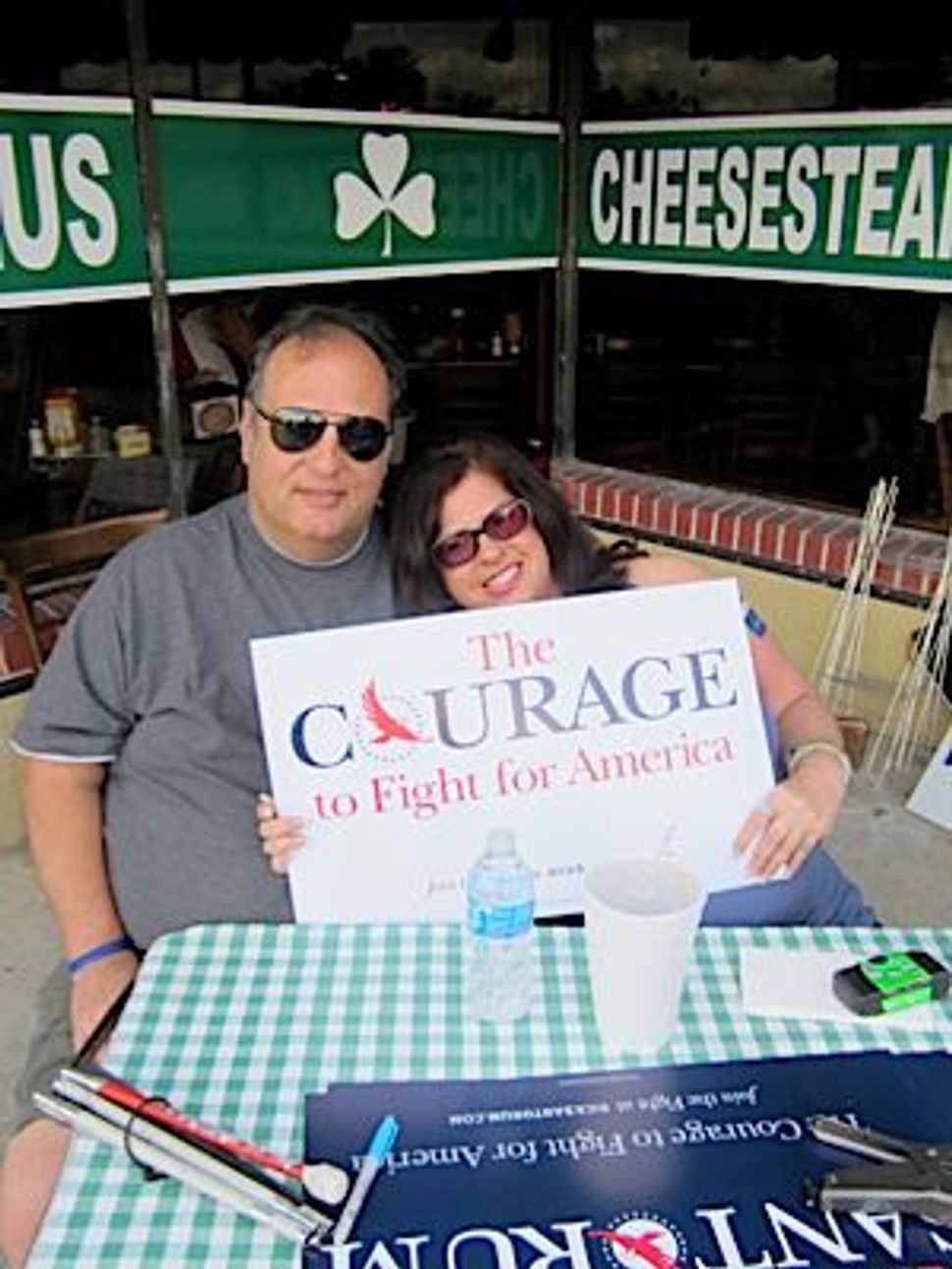 Sandra Lapomardo with Barry Leffkov, both Jewish supporters of Rick Santorum, outside a rally in Coral Springs, Fla. Image by Josh Nathan-Kazis

Coral Springs, Fla. — It doesn’t take long to find Obama voters in the synagogues and retirement communities of Jewish south Florida. Mitt Romney has fans here, too. Newt Gingrich supporters are a little harder to come by.

And Jewish Rick Santorum supporters? In two and a half days of talking to Jews here, the Forward had found exactly none.

But then Santorum himself came to town. And though Santorum is known for his emphasis on social issues, some of the biggest applause lines at the Broward County rally on Sunday came when the candidate talked tough on Iran. While establishment Jewish Republicans have been absent from the Santorum camp, Jewish Santorum supporters at the rally seemed to represent an enthusiastic, if not overwhelmingly numerous, grassroots bunch.

“He’s the only conservative,” said Mark Kleiman, a Jewish Santorum supporter. “Romney and Gingrich are liberals.”

The Coral Springs rally came one day after a poor showing by Santorum in South Carolina’s primary, where he received just 17% of the vote. The victor of the caucuses in Iowa, Santorum now trails both Romney and Gingrich in Florida by double digits.

Santorum has staked out hard-line positions on Israel and Iran, and he enjoys warm relationships with Washington, D.C.’s pro-Israel lobbyists due to his legislative efforts as a senator. But the conservative Catholic’s emphasis on social issues has been less attractive to mainstream Jewish Republicans, and Santorum has no prominent Jewish backers.

You wouldn’t have known that in Coral Springs. Santorum was introduced by former Ft. Lauderdale mayor Jim Naugle, who said that his wife and child were Jewish, and that he supports Santorum in order to ensure “not only that Israel continues to stand strong, but that it continues to stand at all.”

Sandra Lapomardo, a Jewish Santorum fan who moved to Florida last week from Massachusetts, said that she had become interested in Santorum after hearing that the family on TLC’s TV program “19 Kids and Counting” were supporters. Lapomardo, who is disabled, said that she disliked Romney because of experiences with Massachusetts’ healthcare system.

Another Jewish Santorum supporter, Nat Trayger, was driven by his dislike for Obama. “I despise Obama’s redistributionist agenda,” Trayger said.

The crowd of roughly 200 people greeted Santorum in a sunny parking lot outside a local restaurant called Wings Plus, owned by a retired Nassau County, N.Y. police officer. Gingrich is due in the parking lot later in the week, and Wings Plus owner Bryan Walsh said that he had been in touch with the Obama campaign about arranging a visit.

Some rally attendees were unimpressed. “Rick Santorum’s a nice guy, but this is the most uninspiring speech I’ve ever heard in my life,” Brian Craig, a Boca Raton resident and radio producer, told a friend partway through the address. Craig identified himself as a Gingrich supporter.

Perhaps the heartiest ovation of Santorum’s his 38-minute speech came when he promised a willingness to use force against Iran to prevent the nation from obtaining nuclear weapons. Santorum said that, if left with no choice, “I will make a clear declaration to the Iranian government that you either open your facilities, you begin to dismantle your nuclear program, or we will dismantle it for you.”

The Republican hopeful went on to compare the Iranian regime to al Qaeda, suggesting that a nuclear Iran presented a threat to the United States.

“We cannot allow the equivalent of al Qaeda to have this weapon, not just because they will use it … but just as importantly, having a nuclear shield, having a nuclear weapon that is a deterrent from any government attacking you or destabilizing your government, will give them carte blanche to spread a reign of terror around not just the Middle East, but here her America, here in Florida, here across Western civilization,” Santorum warned.

Santorum was the only presidential hopeful in South Florida Sunday. Romney was upstate Sunday; Gingrich arrives in the state today.

Can Santorum Win Over South Floridians?