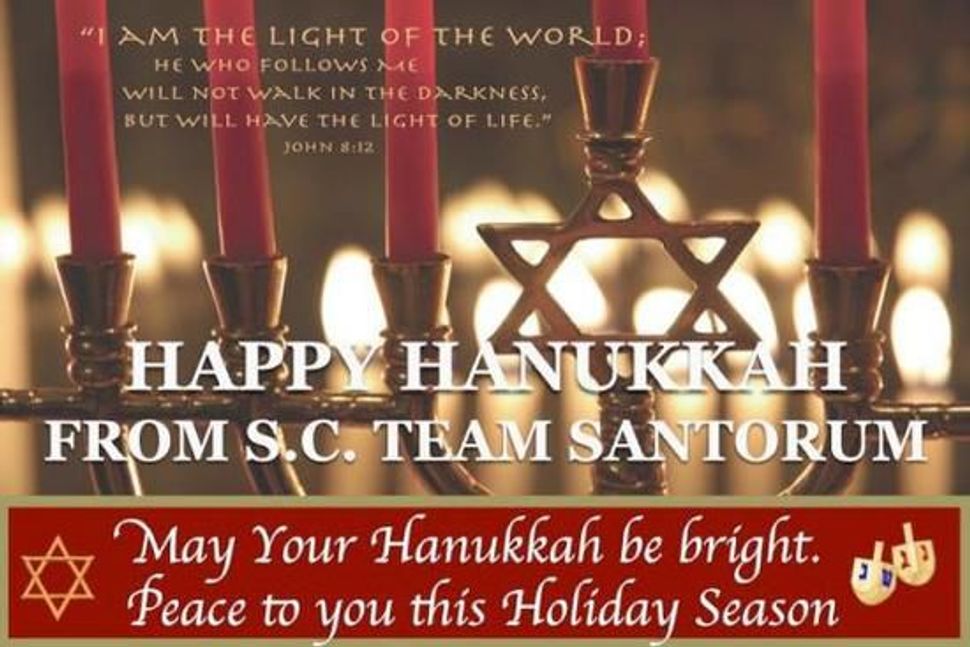 Rick Santorum is back in the headlines after his sweeping victory Tuesday in Colorado, Minnesota and Missouri. His success is cause for renewed attention and for a better look at this interesting nugget dug up by the New York Observer’s political reporter Hunter Walker.

It is a Hanukkah card sent out by Rick Santorum’s South Carolina campaign a couple of months ago. The card shows a menorah and candles, and is decorated with a few Stars of David, but the greeting itself is rather odd. It reads: “I am the light of the world. He who follows me will not walk in the darkness but will have the light of life.” This quote could leave Jewish supporters scratching their head since not many Jewish Americans grow up reading John 8:12 of the New Testament. The card did omit however (perhaps in consideration of the Jewish recipients) the first part of the verse which makes clear that it is Jesus speaking.

The card has been popping up in websites today with some writers trying to guess whether Santorum was secretly trying to convert his Jewish followers.

But the real question is who was this greeting card intended for? South Carolina has a lot of Jewish history but a rather small Jewish community and if national Jewish voting patterns apply to South Carolina, Republican Jews in the state are hard to come by. What would make more sense is to address these cards to the state’s large evangelical population, which, in general, holds warm feeling toward Israel and the Jewish people, and could probably better appreciate a quote of Jesus from the New Testament.