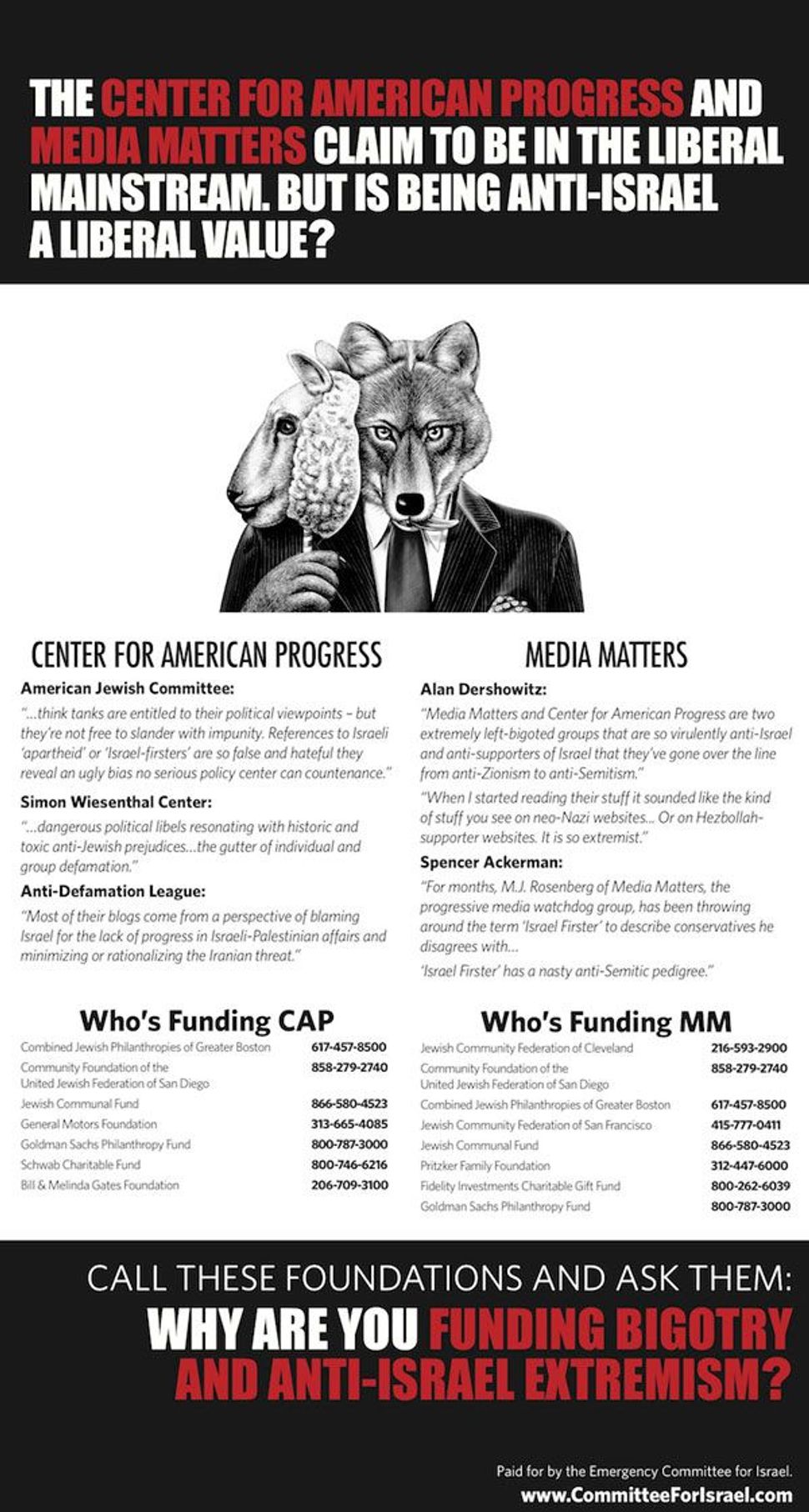 Paid for by the Emergency Committee for Israel, the ad goes after two liberal organizations with the verbal equivalent of a firing squad. The Center for American Progress, a Washington-based think tank which generally writes about issues such as tax policy and immigration reform, and Media Matters, an unabashedly liberal group, are labeled anti-Israel extremists and bigots in the ad, which took up an entire page of the front section of the Times.

What’s more, the ad lists foundations that apparently fund CAP and Media Matters, and urges readers to call and complain. Just to be helpful, phone numbers are included. And it uses quotes from two Jewish leaders, Alan Dershowitz and Spencer Ackerman, who were not consulted and disapprove of the ad.

And what are the crimes committed by CAP and Media Matters that deserve this public punishment?

According to the links on ECI’s website, CAP is so dangerous to Israel because of offensive comments made by two of its staffers on their personal Twitter accounts, not on the CAP website or its blog. The comments have been deleted, the authors apologized, but apparently that’s not good enough.

More broadly, writers like Ben Smith, of Buzzfeed and Politico, have argued that CAP and Media Matters “have emerged as vocal critics of their party’s staunchly pro-Israel congressional leadership and have been at odds, at times, with Barack Obama’s White House.” And being at odds with the Obama administration in this case means criticizing Israel far more harshly and repeatedly than the White House ever has.

I wave no banner for CAP or for MJ Rosenberg, the main writer for Media Matters. I understand why some of their comments can be construed as unfair and hyper-critical. But honestly, the brouhaha over these tweets and posts is the kind of thing that gets a few Washington insiders all riled up, and has little to do with the way most American Jews act, think and vote.

But, of course, this isn’t about CAP. Or Media Matters. It’s about Obama. The furor referred to in the ad blew up in early January. And why bring it up now? Well, the American Israel Public Affairs Committee’s annual meeting starts on Sunday. Obama is scheduled to meet with Israeli Prime Minister Benjamin Netanyahu on Monday. And the question of what to do about Iran burns through all these sessions.

No matter how important the issue, the nastiness in this ad is unconscionable. Dershowitz told me that he did not give his permission to be quoted. “I don’t approve of the ad,” he wrote in an email. Neither did Ackerman, who tweeted: “ECI are clowns.”

Dangerous ones, at that. It costs as much as $150,000 for a full-page ad in the Times. The cost to ECI’s reputation is priceless.

UPDATE: The American Jewish Committee, which was also quoted in the ad, just released a statement: “No one from the sponsoring group, an ideologically-driven organization to judge from its ads and other public activities, sought AJC’s consent to include reference to us in today’s ad. We want to make this absolutely clear to readers of the ad.”