Living With the Church-State Tension 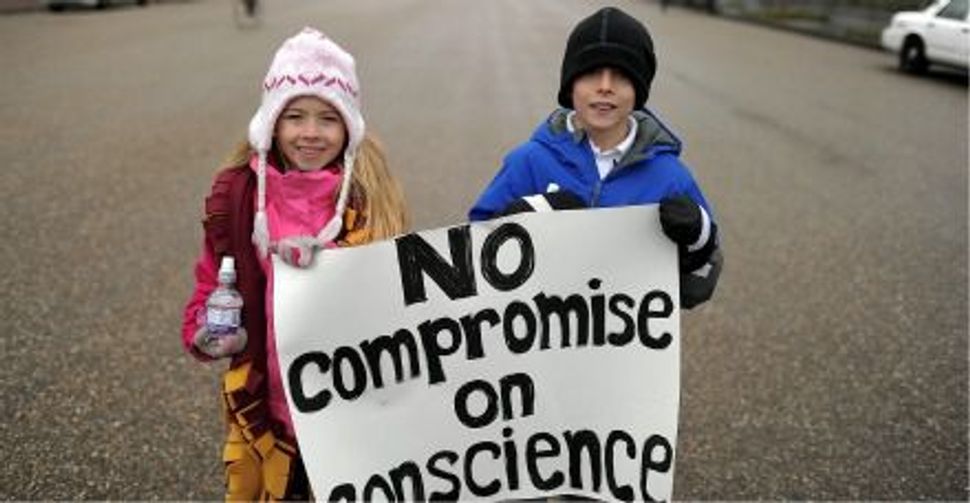 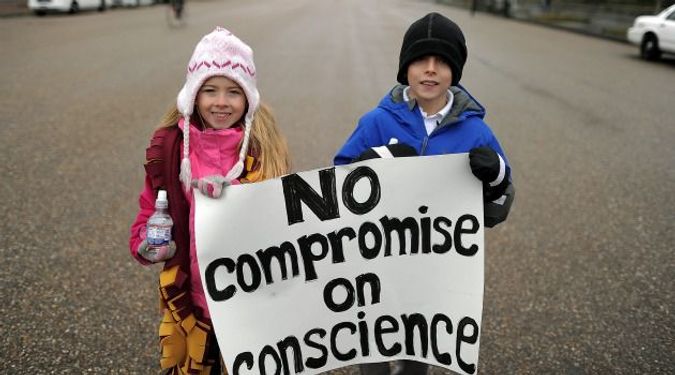 Littlest Protesters: President Obama?s compromise on birth control coverage brought protesters into the streets. But whose conscience was being compromised? Image by getty images

Few topics are as fraught and complicated, or as tempting to oversimplify, as the encounter between religion and state. Take Israel. The balance of religion and state seems to be particularly imperiled for a variety of cultural and political reasons. Some Israelis think the problem has to do with an increase in religious commitment itself. They point, for example, to a recently released Guttman Center survey that found that only 44% of those questioned believed that “in the event of a contradiction between halacha and democratic principles, democracy should always take precedence.” In fact, Ben-Gurion University professor Harvey Hames argued in these pages a few weeks ago that this finding “implies that when push comes to shove, a majority of Israelis would prefer Jewish law to democratic values.” But this overlooks some crucial particulars.

First, though the survey did report that only 44% of respondents would always give priority to “democratic values,” it also found that a mere 20% would always give priority to Halacha. The remaining 36% answered quite sensibly, given the vacuity of the question, that “each case must be judged on its own merits.” Second, any religiously serious person is likely to believe that “when push comes to shove,” a divine imperative prevails over a human command, whether the source of that command is a dictator or a democracy. For that matter, any serious nonreligious person is likely to have some commitment that would take priority over unconscionable majority decisions. Third, modern democratic tradition itself embraces the idea that even democracy has its limits, particularly with respect to religion. James Madison — drafter of the American Bill of Rights, and not a Haredi Jew — eloquently insisted, “It is the duty of every man to render to the Creator such homage and such only as he believes to be acceptable to him. This duty is precedent, both in order of time and in degree of obligation, to the claims of Civil Society. Before any man can be considered as a member of Civil Society, he must be considered as a subject of the Governour of the Universe.”

The challenge is not deciding who should prevail “when push comes to shove”; it is trying to keep push from coming to shove. For democratic constitutions, that means respecting as much religious liberty as possible, while also drawing clear jurisdictional lines between religion and government to try to protect each side from the encroachments of the other. For religious traditions, it means developing an understanding of legitimate state authority and a respect for pluralism and the conscience of others. The Halacha, in all its richness, already has most of the tools necessary to reconcile itself, most of the time, to democratic governance.

None of this is easy. It is particularly hard in Israel, with a state that wants to be both Jewish and liberal, and a Jewish tradition that has more experience in navigating as a minority in hostile societies than in restraining itself when it comes close to the levers of power.

But the United States does not have it all figured out, either, as the current debate over the contraception mandate drives home. One side calls it a “War on Women” (and Rush Limbaugh has surely made it look like one). The other side calls it a “War on Religion.” But this is not a war; it is a genuine dilemma and part of an ongoing wary waltz between church and state.

The Obama administration issued a rule requiring most employer-provided medical insurance plans to cover contraception. When Catholic employers objected, the administration compromised, shifting the burden on employers to insurance companies. For the church, this raises hard theological questions. Contraception is evil in its eyes, and it cannot “cooperate with evil.” But what counts as “cooperation with evil”? Some Catholic organizations have decided that the administration’s compromise works. The bishops disagree.

It is not up to the rest of us, however, to second-guess that theological conclusion. So we are left with a conflict. On the one hand, the contraception mandate is important. On the other hand, the church is not demanding its repeal, only asking for an exemption for church-affiliated employers. For other reasons, many employers are exempt from offering any health insurance. On the third hand (so to speak), the case for religious exemptions is always weakest when those exemptions could hurt third parties outside the faith. On the fourth hand, these particular third parties are voluntary employees. On the fifth hand, the government also has an interest in the standardization of insurance plans and in protecting the integrity of the system. On the sixth hand, the whole clash between mandates and conscience could be avoided if the government just provided contraception coverage itself. (Anyone remember the single-payer option?) And so on. The arguments are well matched, and when the fight goes to court, good and reasonable briefs will be written on all sides.

Perry Dane is a professor of law at the Rutgers School of Law — Camden.

Living With the Church-State Tension