Arrival of the ‘New American Haggadah’ 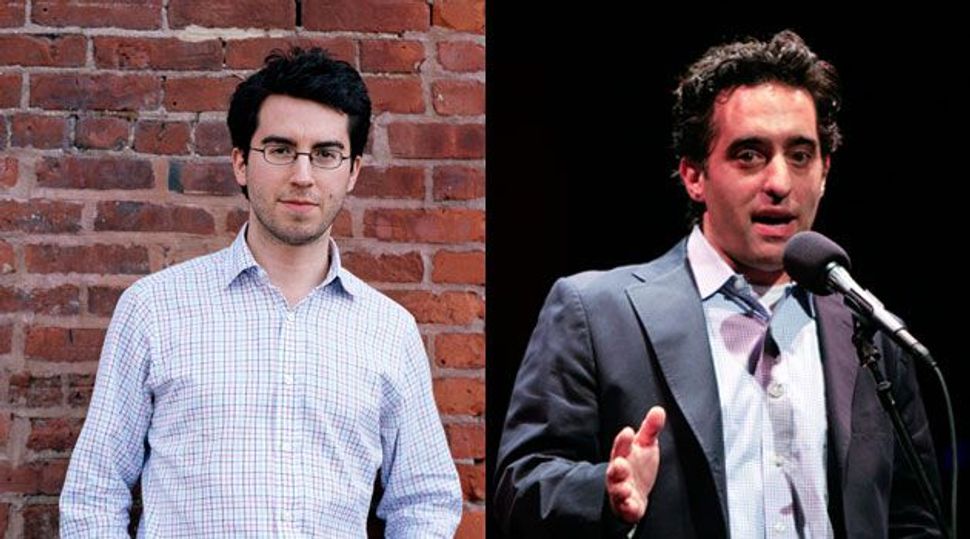 ‘Here I am, prepared and ardent [as in hineni muchan umzuman], allied and present, ready to perform the mitzvah of the first cup, the enactment of salvation’s promise…. You are blessed, Lord God-of-us, King of the Cosmos [eloheinu melech ha’olam], Maker of the fruit of the vine.”

That is what Nathan Englander’s fresh, inventive, liberal and respectful translation, a central feature of “The New American Haggadah,” proposes we read before each of the four cups at the Pesach seder. (It may be that “cosmos” instead of “world” is unsettling. But five years from now, it will feel cozy, familiar. And anyway, those are words most of us will still recite in Hebrew.)

I say a central feature; there are others. The Haggadah was edited by Jonathan Safran Foer, with interspersed commentaries, often challenging, surprising, even profound, composed by Rebecca Newberger Goldstein, Jeffrey Goldberg, Nathaniel Deutsch, and Lemony Snicket (yes, that Lemony Snicket). Oded Ezer, a remarkable Israeli typographer and designer, designed the book, and has produced a visually gorgeous and utterly contemporary book.

I am bedazzled by the result, both in and of itself and because of my own history of interaction with the Haggadah.

The weeks before Passover were among my late father’s busiest of the year. He spent his time stapling together pages of the traditional Haggadah, the pages we’d be skipping come Seder time, and then inserting copies of readings he wanted to add, readings that changed from year to year. Pre-computer, this was not a simple task.

I inherited the custom from him, and every year produced a newish Haggadah. Most of the inserts were my own work, and it was hard for me ever to drop words so carefully composed. So the Seder had a tendency to grow, and then grow more and still more. By now, it has become swollen and, I fear, somewhat ponderous.

Now the answer has become simple. Buy a copy of “The New American Haggadah.” It is a labor of great love and of much work and, above all, of brilliant artistry — verbal, graphic and intellectual.

There’s an elaborate discussion, for example, of why the wicked son’s exclusion of himself (“What does this type of worship mean to you?”) is generally thought so reprehensible. “There is a son who sits at the table, harboring an irreverent question, one that challenges the assumptions that have brought this family to this table for many generations. If the struggles with his question lead him away from the answers of his father, what then? Must lineage dictate the son’s interpretation of the world?” And, nearby, an observation that there may be four kinds of parents, as well.

There’s a provocative discussion of the 10 plagues and of the afikomen, and a challenging exploration of that ever-vexing passage, “Pour out They wrath on the nations that did not recognize You.” (“We interrupt this celebration of liberation to bring you a word from the Jewish id.”)

My own favorite so far (I have only begun my page-by-page reading) is a discussion very near the end of the tale: “The Haggadah saves the most demanding call for the final moment of the Seder. ‘Next year in Jerusalem,’ we declare, sometimes nervously, sometimes self-consciously, always ambivalently…” for surely most of us have no plans at all to pack up and move to Israel.

I don’t know yet how all this will feel when read aloud at the seder table, nor even, for that matter, how much of it we will actually read. We’ll surely pick and choose, would do that even if there were not, as there in fact will be, six of the 36 who will gather on Seder night who are not yet b’nai mitzvah and three who are in their eighth or ninth decade. And I will doubtless end up saving some elements of my own Haggadah — here a poem of Yehuda Amichai, there my own words about hunger and wholeness.

There are years when all the elaborate planning and preparation make me feel, come Seder night, as if I have been transitioning from freedom to slavery. This year, I am determined, aided and abetted by “The New American Haggadah,” to experience both the liberation that is the story’s message and the longing, too — for Elijah, for redemption, for Jerusalem.

Arrival of the ‘New American Haggadah’