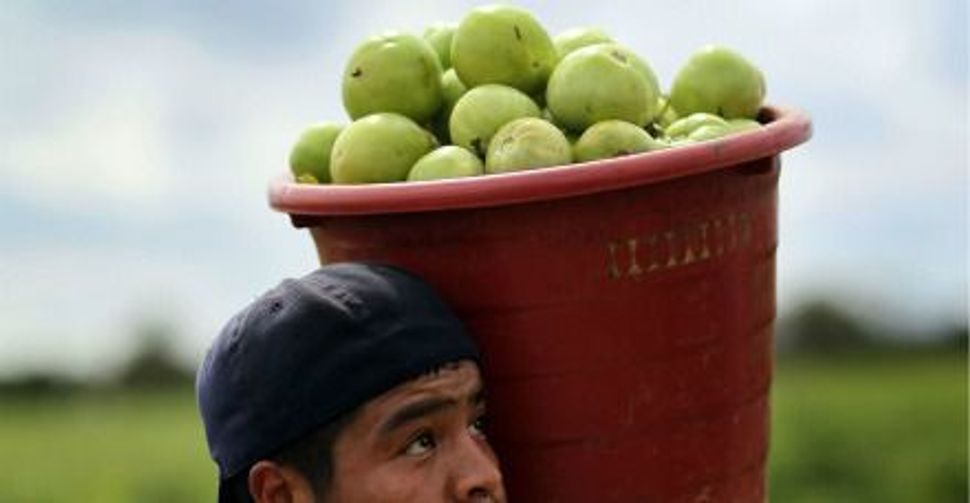 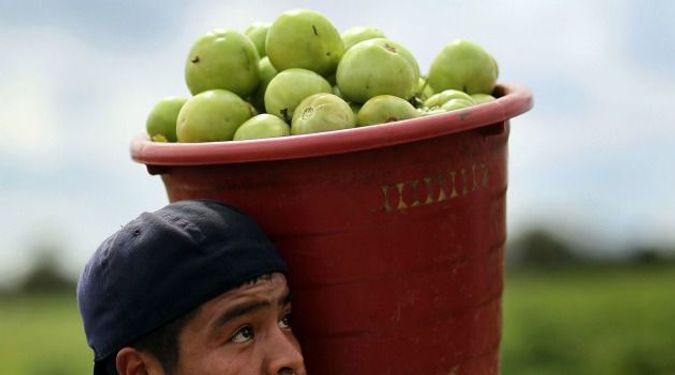 Slavery in the Sunshine: Nine cases of modern slavery have been prosecuted in Florida?s agricultural sector, leading one federal prosecutor to call it ?ground zero? for modern slavery in America. Image by getty images

During the Seder, some Jews have the custom of going around the table and imagining themselves as Hebrew slaves in Egypt during the Exodus. They describe their respective slave jobs — bricklayer, house slave, mortar mixer — and how they feel about their impending freedom. The game illuminates the Seder’s insistence that had God not redeemed us from Egypt, the Jewish people might still be enslaved.

But when I think of what it would mean to be a slave today, I don’t need to look to the past for examples. Going around the Seder table, I think: I could be a farm hand, a nanny or a home health care worker, a child picking cocoa or a man laboring on a fishing boat, someone forced into prostitution or doing menial work at a hotel. More than 3,000 years after the Exodus, and 150 years after the Civil War, slavery and human trafficking continue to flourish around the world.

Estimates of modern slavery range from 12 million to 27 million people. Human trafficking has been found in more than 90 cities in the United States, with the number rising. Tens of thousands of foreign nationals are trafficked into the United States, and many Americans, including children and teenagers, are also at risk of being trafficked domestically. Slavery is the extreme end of an abusive employment continuum filled with low-wage, dangerous jobs.

Many of us assume that in order for someone to be a slave, he or she needs to be locked in a room or chained to a wall. But many slaves today are held by threats of extreme violence, either to themselves or to their families, or by beatings and sexual assault. They may have had their passports confiscated or have been told that if they leave their employer, they will be deported. Through fraud or coercion, they may be in extreme levels of debt to their recruiter, working for a pittance until it is paid off.

The reality of what modern slavery looks like hit home for me during my recent visit with other rabbis to Immokalee, Fla., to learn about human trafficking in Florida’s tomato fields. I stood in the sweltering sun near a truck where three men had been held against their will, driven by their crew chief to work in the fields during the day and locked in the truck at night. They had to punch a hole in the roof. I saw a set of heavy iron chains, and a bloodstained shirt worn by a worker beaten for daring to speak up. Over the past 15 years, nine cases of modern slavery have been prosecuted in Florida’s agricultural sector, leading one federal prosecutor to call it “ground zero” for modern slavery in America. Forced labor cases have involved farm workers here both legally and illegally.

The Jewish journey to freedom from slavery is the foundation of Jewish empathy for the plight of the most vulnerable. Maimonides teaches that the mitzvah of redeeming captives takes precedence over many other mitzvot, since those held against their will suffer a constellation of indignities such as hunger, and because of the commandment to not stand idly by the blood of your neighbor. Because of the experience of the Exodus, the Torah commands us to protect the stranger in our midst 36 times — according to the Talmud, more often than the laws of the Sabbath or of keeping kosher.

But the challenge for us today is to see ending slavery as more than just freeing individuals from captivity. We have to get at the root of the problem, asking corporations (both here and abroad) to audit their supply chains to ensure that none of the raw materials is the product of slave labor. We have to increase protections here in the United States for workers, including regulating overseas recruiters and raising wages (when wages are extremely low, it becomes tempting to pay nothing at all).

In Florida, change is already happening through the efforts of the Coalition of Immokalee Workers, an organization of farm workers that is striving to end slavery and other abusive conditions in the tomato fields. Its Campaign for Fair Food has convinced 10 major food corporations — including, most recently, Trader Joe’s — to sign a Fair Food Agreement, which raises the wage of tomato workers and requires companies to source tomatoes from growers that agree to a code of conduct in the fields that includes a zero tolerance policy for forced labor. Since 2010, more than 90% of Florida’s tomato growers have begun to implement these agreements.

As the Seder begins, we say: “This year, we are slaves. Next, may we be free people.” It will take a tremendous effort to end modern slavery, but there are steps we all can take. There is no “slave-free” hekhsher, but buying certified Fair Trade is often a proxy for ethically produced goods. And the Jewish community can support the Coalition of Immokalee Workers in its efforts to ensure that the hands that pick the food we all eat are free.

Rabbi Rachel Kahn-Troster is the director of North American programs for Rabbis for Human Rights­­-North America.