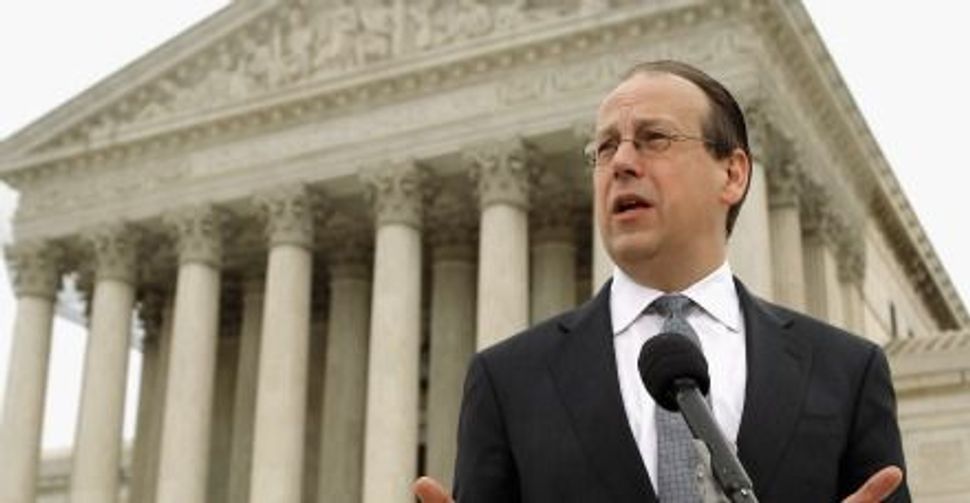 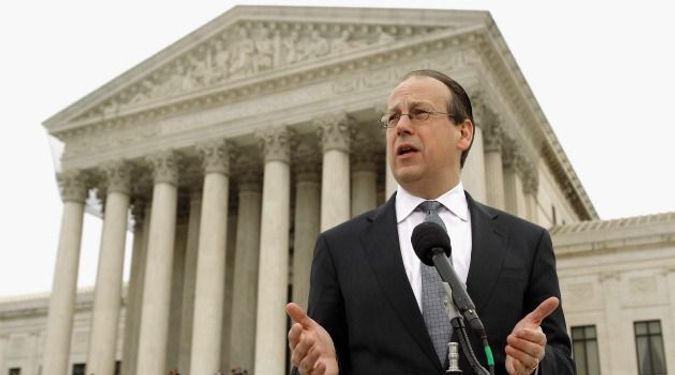 Arguing Obamacare: Paul Clement discusses the case against the health care reform act. The conservative majority on the Supreme Court seemed receptive to his argument that Americans should not be forced to buy insurance. Image by getty images

Like Charlie Brown and his famous football, various liberal legal scholars have been writing for weeks now that the Supreme Court just might transcend its 5-4 partisan divide and decide the fate of President Obama’s health care reform on the merits, not the politics.

It’s conceivable. Perhaps one or more of the conservative justices will side with the administration and let the health law stand, despite the obvious skepticism the conservatives displayed during the hearings on the law in late March.

True, the conservatives seemed unanimously hostile to the law’s central requirement that individuals buy health insurance. One after another, their questions suggested that it expands the government’s power to regulate interstate commerce far beyond what the Constitution intended. It’s a basic tenet of conservative judicial philosophy that we should read the Constitution as the Framers intended it and not reinterpret it to fit the fashions of the moment. And the Framers never mentioned health insurance.

Unfortunately for the administration, the power to regulate interstate commerce is the peg on which it’s hung the insurance mandate, and without it, the whole reform is in trouble. Many healthy people won’t buy insurance if they don’t have to. If so, sick people’s premiums will keep rising. The law’s most popular rules, like barring insurers from excluding pre-existing conditions, will become untenable.

But what if the Framers didn’t mean “commerce” the way we think? Samuel Johnson’s “Dictionary of the English Language,” our best guide to common usage in that era, defined it in 1792 as “interchange of any thing; trade; traffick.” He also offered a far more abstract meaning: “intercourse” (by which he meant human interaction in the broadest sense, not you-know-what). Which meaning did our Founders have in mind? Hard to say.

Even with the conservatives’ commitment to “original intent,” therefore, they could theoretically lean either way on requiring insurance. Take Justice Antonin Scalia. He was particularly skeptical of the mandate during the hearings. He asked sarcastically if the same logic could force individuals to buy broccoli as a way to regulate interstate commerce in food. And yet the same Scalia in 2005 endorsed federal regulation of another leafy green vegetable unmentioned in the Constitution. He was writing a concurring opinion in Gonzales v. Raich, which allowed Congress to override California’s medical marijuana laws. Regulating interstate commerce, Scalia wrote then, could include banning even “a noneconomic local activity” that does not “substantially affect interstate commerce,” if it helps “to make a regulation of interstate commerce effective.” The “relevant question” was whether Congress was acting “reasonably” to attain “a legitimate end under the commerce power.”

If barring Californians from growing marijuana in their bathtubs falls reasonably and legitimately under Congress’s commerce power, it’s hard to see how requiring individuals to buy health insurance doesn’t. Both laws stretch the federal government’s powers in ways the Founders never imagined in pursuit of social goals they hadn’t dreamed of: preventing marijuana use and saving lives through modern medicine.

The Founders couldn’t have imagined a world where millions of lives are saved by cardiac surgery and chemotherapy. Nor could they have imagined an America where close to 45,000 people die each year because they lack health insurance, as documented in a 2009 Harvard Medical School study. Considering that all five conservative justices are devout Catholics outspokenly devoted to the right to life, the stakes in this case might lead at least some toward the more expansive reading of the commerce clause.

The ambiguity of the commerce clause has long made it a nifty hook for letting the federal government do all sorts of things the Founders hadn’t thought of. As liberal Justice John Paul Stevens wrote in the 2005 marijuana ruling, the commerce power has been expanding steadily since the 1880s to cope with “rapid industrial development and an increasingly interdependent national economy.” It’s been used to break up monopolies, pave highways, outlaw unsafe toys and, most famously, prohibit racial segregation in businesses that serve the public.

What it’s never done, to hear Obamacare opponents tell it, is force anyone to do something they weren’t doing. Not participating in commerce — not buying insurance, for instance — isn’t an act of commerce and can’t be regulated, they say.

This would come as a surprise to thousands of railroad and airline workers who’ve been forced to go to work when they wanted to stay out on strike over the decades since the 1926 Railway Labor Act was passed. Chief Justice Warren Burger usefully explained in his 1982 United Transportation Union v. Long Island Rail Road Co. decision how the commerce clause can make people do things they don’t want to do. Ronald Reagan offered a live demonstration a year earlier when he fired 11,000 striking air traffic controllers. You didn’t hear a lot of conservatives complaining back then.

Since then, though, an increasingly conservative court has been steadily gutting the commerce clause, insisting on the Constitution’s “original intent.” Among other things, it’s struck down laws banning handguns in schools and letting rape victims sue their attackers — both in 5-4 decisions.

Expecting otherwise this time might be a triumph of hope over experience, to quote Dr. Johnson again. This is a court that decided 5-4 to stop counting votes in 2000 and make George W. Bush president. That decided 5-4 in Citizens United to quash a century-old ban on corporate campaign spending. It’s a court led by movement conservatives, not judicial ones.

Escape clauses like interstate commerce are an ancient judicial tool for overriding Founders’ original intentions. Even God wasn’t exempt; the sages of the Talmud told Him directly that his intent wasn’t binding because once he gave the Torah to humankind it was, quoting (or deliberately misquoting) Deuteronomy 30:12, “not in heaven.” And yes, they used it to rewrite numerous troubling biblical laws, from executing rebellious children to amputating errant hands, eyes and teeth. Alas, that sort of flexibility is as scarce these days in rabbinic courts as federal ones. Maybe they’ve been putting something in those black cloaks.