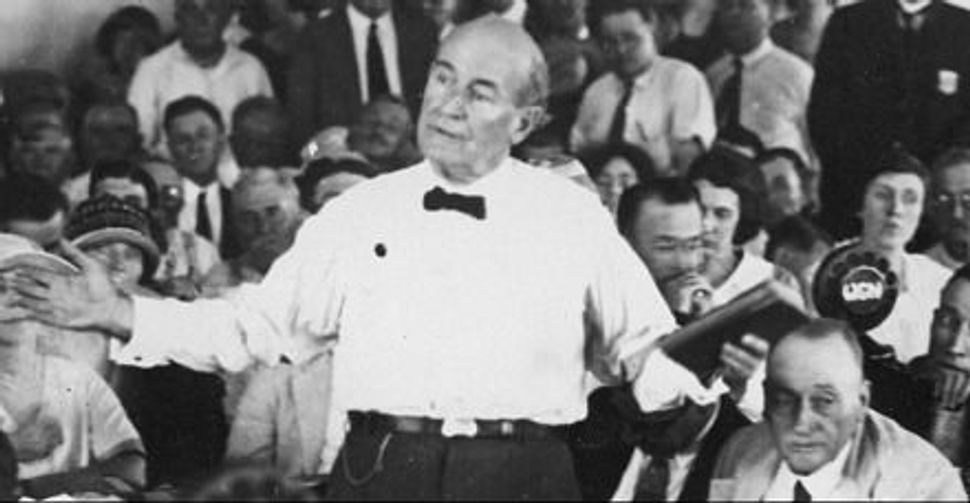 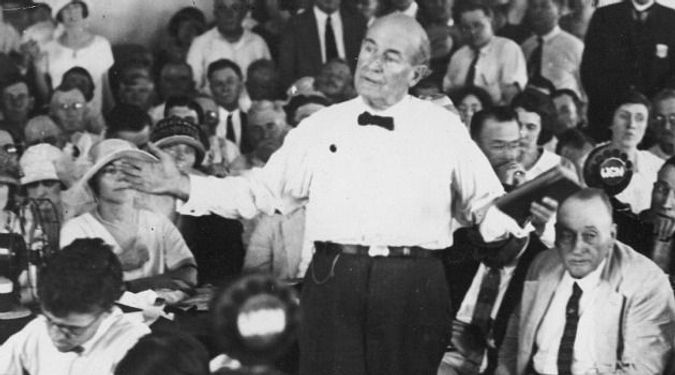 Cross of Gold: Populist William Jennings Bryan terrified wealthy industrialists into pouring funds into the campaign of William McKinley. Is the same thing happening with Super PAC donations in 2012? Image by getty images

‘There are two things that are important in politics,” Republican power-broker Mark Hanna once said. “The first is money and I can’t remember what the second one is.”

Hanna posed his riddle, if that’s what it was, more than a century ago, while managing William McKinley’s successful 1896 White House bid. It’s remained a mystery ever since. What’s the second imperative in politics, after money?

This might be the year we learn the answer. After all, in certain ways it’s 1896 again. That was the year that Hanna single-handedly invented the modern, cash-driven, always-on-message presidential campaign. With Democratic contender William Jennings Bryan’s fiery economic populism scaring the pants off the business class, money was pouring into the McKinley campaign faster than Hanna could count it. If there was a second success factor, he didn’t need to know it.

Hanna’s excesses prompted a series of campaign finance reforms over the years, muddying his insights. This year, however, thanks to the U.S. Supreme Court’s 2010 Citizens United ruling, we’re back where we started. Everything old is new again, right down to the populist-sounding Democrats, panicked tycoons and resultant rivers of Republican cash. This is a fine moment to watch the money in action and see what, if anything, crosses its path.

The first thing to note is that nobody knows what’s going on this year. The fallout from Citizens United has everyone flummoxed. On one recent day, April 20, following the campaigns’ latest filings with the Federal Election Commission, The Washington Post carried a banner headline reading “Obama Posts Big Cash Advantage Over Romney,” while the New York Times’ front-page declared, “Obama Faces Dropoff in Big Donations.”

Similar confusion dogs the number-crunchers. Numerous sources contrast the Obama campaign’s totals through this election cycle, nearly $197 million, with the Romney campaign’s paltry $88 million. Sounds bad for the GOP, right? Now look at the combined donations to all the Republican contenders: a tidy $220 million. If both parties’ donors continue giving at their pace to date, Romney will far outstrip Obama by November.

That may overestimate Romney’s capacity. Some of his rivals’ donors will doubtless back off now that their favorites have quit. Moreover, Obama can expect his donations to pick up now that he’s got a fight on his hands.

Democrats also enjoy an advantage in total donations to the two parties’ national committees. That partly reflects last year’s administrative chaos in the Republican National Committee. According to the Center for Responsive Politics, which analyzes FEC reports, the Democratic National Committee and its affiliated House and Senate funding bodies have raised a total of $416 million toward the 2012 races. Their Republican counterparts have raised $340 million.

The real story this year, however, is the rise of super PACs, the Supreme Court-spawned money machines that are permitted to take gifts of any size, including from corporations. In one sense they’re not behaving the way they were expected to: Most of their money is coming not from corporations but from super-rich individuals. In another sense, though, they’re behaving just as expected: They’re raising gargantuan sums, mostly to benefit Republicans.

According to FEC figures analyzed by the Pro Publica news service, the 29 most active super PACs have raised a total of $173 million. Of that, about $18 million went to super PACs supporting Obama and the Democratic House and Senate campaigns. The rest, some $155 million, has gone to the Republican side. And the game has just begun.

This remaking of the campaign finance system will reshuffle our politics in ways that no one can yet predict. One change we can begin to observe, though, is in the role of Jewish donors. They’ve long been a mainstay of Democratic politics. Their footprint on the GOP side is traditionally smaller. The super PAC phenomenon is already boosting Jewish donors’ importance in the Republican Party by several orders of magnitude.

The Forward’s Josh Nathan-Kazis reported in March on Jewish giving to the biggest super PAC, the pro-Romney Restore Our Future, which had raised a total of $36 million at the time (as of April 23 it’s reached $52 million). At the time, he reported, Jews had provided about 10% of the PAC’s total revenues.

Moreover, he noted, several of the pro-Romney PAC’s Jewish donors were former Democratic donors who switched sides this year, presumably because of disenchantment with the president. If that continues and becomes a trend, it will have serious implications for the future.

Scanning the broader super PAC field, the impact is even more striking. Of 25 Republican super PAC donors who have given $1 million or more, four or five are Jewish (depending on whether you count Sheldon and Miriam Adelson separately, as the FEC and IRS do). The Adelsons, in fact, are the largest single donors in American politics, accounting for a total of $26.5 million in gifts in this campaign between the two of them and their three daughters. Most of their gifts, $21.5 million, went to the pro-Gingrich Winning Our Future PAC. The other $5 million went to the pro-GOP Congressional Leadership Fund.

This makes for a double-blow to the Democrats. On one hand, the super PACs’ potential benefit to Republicans seems incalculable. Only 10% of Forbes magazine’s 400 wealthiest American billionaires had given by late March. Another 360 wait to be tapped.

No less alarming, Republicans are faring better than Democrats among wealthy Jews (including those giving less than $1 million). That’s unprecedented.

And if Obama manages to make up the shortfall through small online donations, a feat he mastered in 2008, what are the implications for Jewish influence in the Democratic Party?

On the other hand, what if these new Jewish mega-donors become a force within the GOP? Most of them appear to be entrepreneurs and investors alienated by Obama’s fiscal policies. Many are outspokenly progressive on issues like abortion, gay rights and the environment. If they end up gaining the clout their donations suggest, then liberals might have to rethink their fear and loathing of the other party. Watch the money.