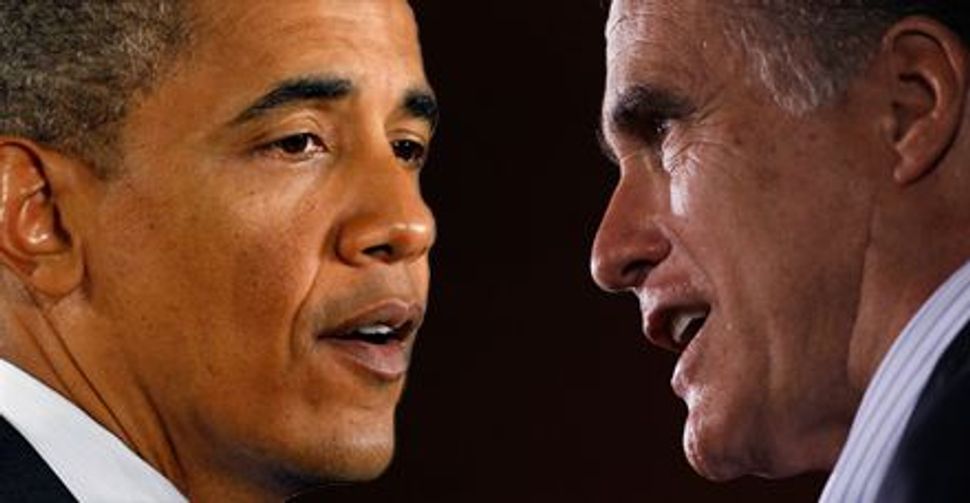 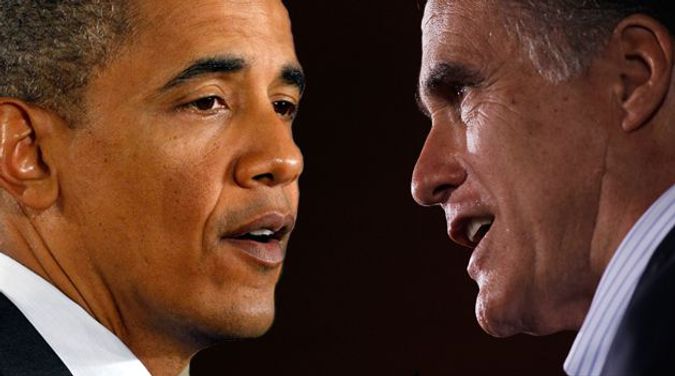 4 Questions: What would President Obama or Mitt Romney do to move the Middle East peace process forward? Image by getty images

The battle for the philo-Israel vote is taking familiar shape as both major candidates and major parties do their best to pledge fealty to Israel at this hour of maximum peril.

President Barack Obama and Governor Mitt Romney are outdoing each other when it comes to their rhetoric. Obama says he’s got Israel’s back. Romney says that a White House led by him would not have “one inch of difference” with Jerusalem.

Cynics may think — and in fact, Secretary of State Hillary Rodham Clinton said as much on a recent trip to Tunisia — that whatever pro-Israel rhetoric is uttered in an election season is mere political puffery. Once the hard work of governing begins, reality will set in, and America will return to its role as an even-handed peacemaker in the region.

If so, let’s take that possibility seriously and ask the candidates whether in addition to having Israel’s back in case of war, they have a plan to deliver peace to the Jewish state. I think the resulting conversation would be revealing.

I would welcome the candidates to answer four basic questions: What are the benefits of peace? How will America pursue it differently than it has in the past? What would we expect Israel to give up for peace? And what would peace demand of the Palestinians?

As it turns out, four years ago, then-Senator Obama spoke quite openly at the Policy Conference of the American Israel Public Affairs Committee about his commitment to a new way of forging peace: “I won’t wait until the waning days of my presidency. I will take an active role, and make a personal commitment to do all I can to advance the cause of peace from the start of my administration.”

That dig on the “waning days” was aimed at the two preceding presidents, George W. Bush and Bill Clinton, whose peace efforts accelerated significantly in their final years of office. So, not only did he promise to advance the cause of peace, but he also promised to do it from day one and not wait.

Obama’s promise turned out to be a pretty flimsy one. He did put in place a special emissary to the region, George Mitchell. And then he proceeded to turn up the pressure on Israel to halt all settlement activity — a longtime bugaboo of the Arab world. He famously promised to create some “daylight” between the United States and Israel, to create a sense in the Arab world that America could be fair.

But within a year’s time, the results were clear: Not only was there no peace, there was also no peace process, or even a process pretending to be a peace process. Obama failed miserably as a peacemaker, and in case you hadn’t noticed, he hasn’t spent any effort on the issue these past few months, which, ironically, could be the waning days of his presidency.

But there’s a lesson here, and not just for politicians promising things they can’t deliver. Forging peace is actually a lot harder than starting a war. Just saying that you’ll try harder and that you’ll try earlier is not much of a strategy. The tactics deployed by Obama — appointing a special negotiator, creating daylight, harping on settlements — also didn’t work.

Which is not to say that they won’t, just that they haven’t. And it would be far more revealing to ask Obama — as well as his challenger — just what he believes caused the failure of the peace process over the last three-plus years. Does he blame himself? Or someone else?

Here’s hoping he has the courage to name precisely who is to blame: the Palestinians.

Peace is not a switch you turn on inside the Oval Office; it is a state of affairs, around which many things must happen. It does not occur by virtue of a meeting of leaders, or by amassing signatures on a page. And it does not result from speeches.

Peace is the exhausting of the options of war and incitement. It is the end point after which the other options for conflict and competition are used up. Peace is what happens after many funerals, and many folded flags.

And here is the thing about Israel: It’s ready for peace. It’s never been more ready. It is a nation ready to blossom in a peaceful age. A nation of remarkable talent and beauty and receptivity. It is a nation of travelers and language learners and cultural experimenters. This is a nation that, when peace comes, its people will know what to do.

But the other side has to reach that moment, too. At times, and in pockets, we have seen it. But not enough. Not nearly enough. The Palestinians haven’t exhausted the option of violence. I fear they are still in the early stages.

It would be good for the next American president — whoever he is — to recognize that there will be no peace until both sides have accepted the end of war and incitement. Let those who stand to gain the most from peace demand it. Let them make the sacrifices for it. Let them exhaust themselves to it.

The timetable of the American presidency will not hasten that day. Neither the first day of a presidency nor the last will make any difference. They say peace agreements exist only for people who need peace. In this case, both sides need it. But only one side wants it.

I hope that this recognition will temper the expectations of the Oval Office’s occupant on January 21, 2013. Not because I don’t wish for peace, but because I wish for peace to mean what the word actually means.