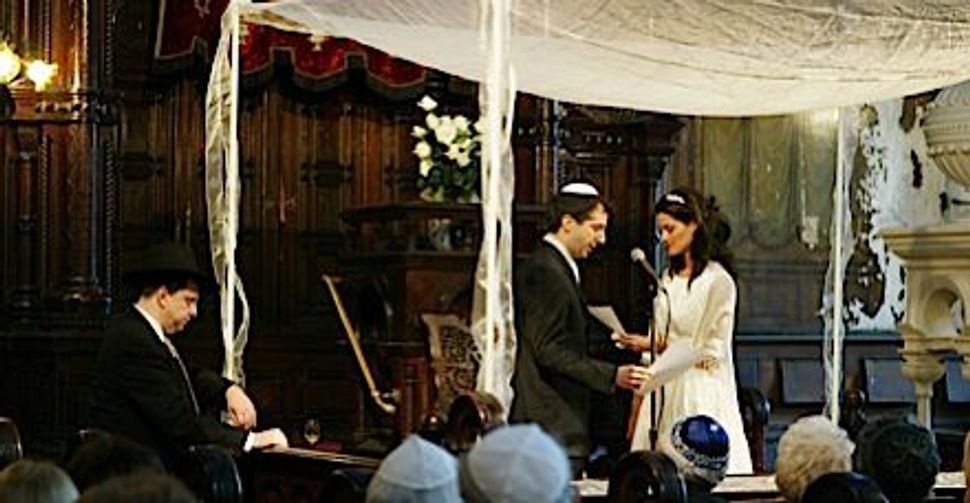 *The Politics of the Chuppah: A progressive, pro-marriage agenda ? for both heterosexual and same-sex couples ? should be framed as a communal and moral responsibility. Image by getty images

When President Obama declared his personal support for same-sex marriage — an announcement whose timing was politically motivated but was historically dramatic nonetheless — he galvanized somewhat more than half the American public, and displeased the rest. Those against allowing two men or two women to legally wed say they are concerned that broadening the definition of marriage from its traditional construct will hasten its decline. 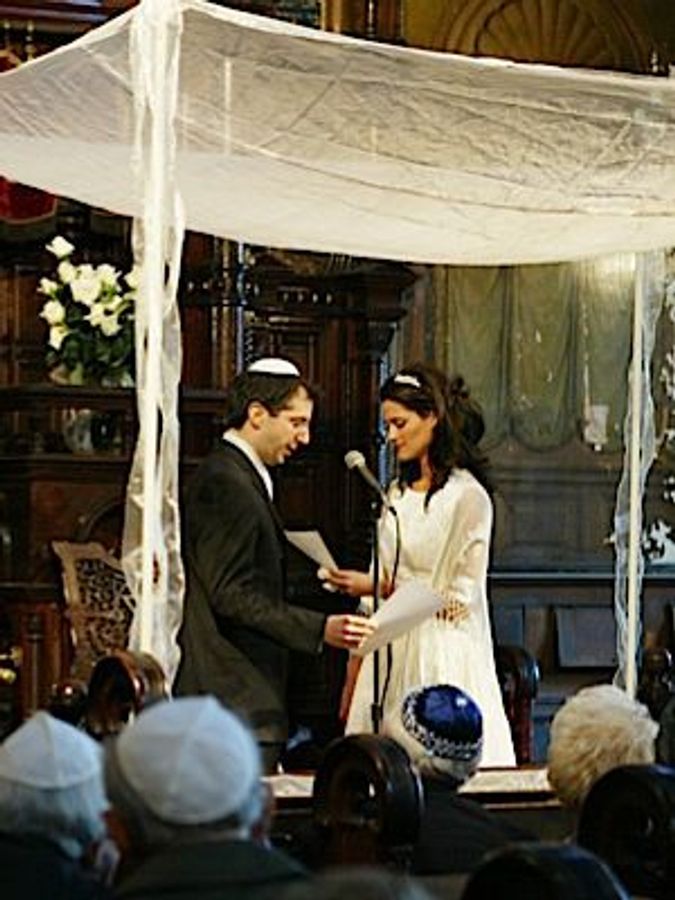 Under the Chuppah: A progressive, pro-marriage agenda can contain a mix of government support and social nudging. Image by getty images

We should all be concerned about the preciptious decline in marriage, and the potential deleterious consequences to children and social stability. But it’s not gay men and lesbians who wish to marry that are at fault here. It’s the heterosexual majority who is responsible.

In general, liberals don’t much like this conversation and so have ceded to conservatives much of the public debate on how to promote and strengthen marriage, allowing it to become a euphemism for a wishful return to a traditional time that is more removed from reality with each passing year. This is especially true in the Jewish community, where women and particularly men marry later or not at all, exaggerating the already dangerous trends in America as a whole.

We ought not to be afraid of this conversation. A progressive, pro-marriage agenda can contain a mix of government support and social nudging, framed not as an individual problem — she isn’t married yet? — but as a communal and moral responsibility.

The trend is startling. A recent survey by the Pew Research Center found that in 1960, 72% of all adults were married; in 2008 the number dropped to 52%. Among twentysomethings, the decline was even sharper: from 68% in 1960 to 26% in 2008. In less than half a century, marriage has evolved — or depending on your point of view, devolved — from a normative state for those under 30 to an unusual situation.

In the American Jewish community, the trend lines are more dramatic. Compared with the general population, Jews are less likely to marry at all, or if they do wed, marry at a later age. Consider these statistics from a 2006 report by the Jewish Data Bank: By age 35, 41% of men and 30% of women nationally are unmarried; among Jews, it’s 52% of men and 36% of women.

For those in loveless marriages, abusive marriages, unhealthy marriages or unequal marriages the growing independence that characterizes modern American culture may be considered a welcome development. Gone are the days when the most a woman could aspire to is a “Mrs.” before her husband’s last name — and good riddance. The decline in marriage maps onto the expansion of women’s rights and possibilities, which has led to a more equal, just and productive society.

But there are consequences. All the research shows that children are best raised within a happy, stable marriage, preferably by their biological parents, or if not, by committed parents of choice. Here, the exceptions do not negate the rule. We can all point to single parents who have raised remarkable children — like the man in the White House — but we can’t avoid the larger truth. In low income communities, especially, children raised by a single parent are far more likely to engage in behaviors (drug use, teen pregnancy, dropping out of high school) that seriously constrain and even damage their futures.

And that’s where the decline in marriage is most pronounced, along class lines. This also may be an inconvenient observation for liberals, but it’s there: In 1960, the gap in marriage rates between between college graduates and those with a high school diploma or less was 4%; in 2008, the gap was 16%. The Pew survey found that the less educated were just as likely to say they want to marry, but lacked the financial stability to put their desires into practice.

This suggests that the decline in marriage among the poor isn’t reflective of a moral failing so much as a shifting economy that has deprived women, and men especially, of decent jobs with the sort of stable futures that allow couples to commit themselves. Government policies have exacerbated income inequality in this country, and government policies can help reverse the trend.

Government, however, can only do so much. Social norms and expectations play a significant role in this marriage plot, and trends within the Jewish community illustrate that. In Orthodox communities, where marriage and childrearing is normative, 71 percent of the 18 to 29-year-olds are married, compared with 20 percent among the non-Orthodox, according to the Jewish Data Bank. Higher fertility rates inevitably follow.

We risk creating in the Jewish community a marriage gap between Orthodox Jews and everyone else wider even than the gap along class lines that runs through the nation as a whole.

This is why liberal Jews must be willing to work towards a culture that values both independence and commitment, one that promotes the obligations and blessings of family life. We must be willing to tell children, straight and gay: Getting married and raising children (in that order) should be part of your future. This is not to demonize or ostracize anyone who takes another path. But it is to say that marriage isn’t merely a personal choice. It is a religious and moral responsibility, the bedrock of a sturdy society and the very best way to raise children.

The gay men and lesbians who have struggled so long for the right to marry are sending a powerful message. We should all strive for what they want.