When Rabbis Start Educating the Soldiers 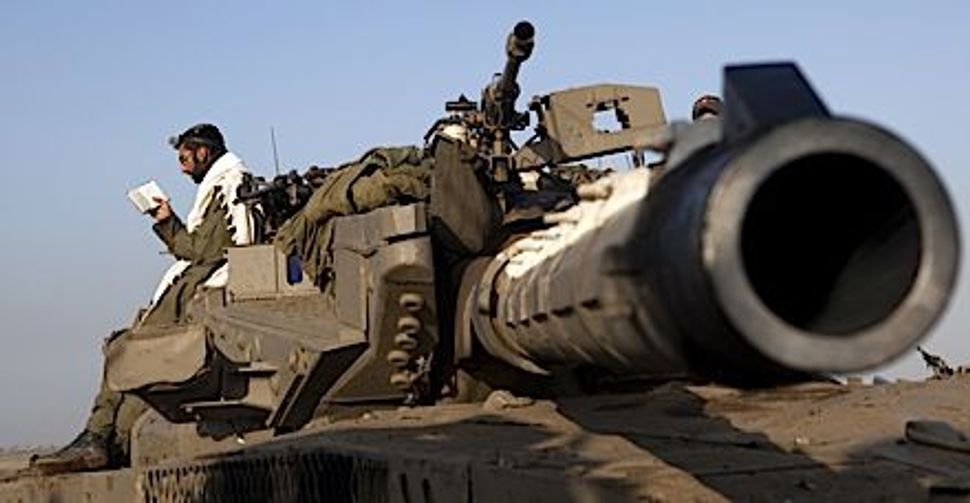 Amid Conflict: A soldier prays on his tank during a military exercise near the Israeli town of Katzrin, in the Golan Heights. Image by getty images

As Israel approaches an August 1 court deadline to scale back army exemptions for yeshiva students, the government’s top watchdog is warning of an emerging problem that confronts the army from the opposite direction. It seems the senior command is increasingly concerned about growing Orthodox rabbinic influence within the ranks.

According to the annual report of the State Comptroller General, released May 1, the Military Rabbinate — essentially the chaplaincy corps of the Israel Defense Forces — has been steadily expanding its activities in recent years beyond its core role of providing ritual services. Increasingly, the rabbinate has been entering areas formally assigned to the army’s Education Corps, including morale building, citizenship, mission clarification and values education.

If this sounds confusing — is the army too Orthodox or not Orthodox enough? — that’s because we’re discussing two different varieties of Orthodoxy. Army exemptions refer to the ultra-Orthodox or Haredi community, known for its black-and-white garb and suspicion of Zionism. The Military Rabbinate, by contrast, is associated with the Religious Zionist or Modern Orthodox community, known for its knitted skullcaps and close ties to the settler movement. As the brass sees it, one isn’t nationalist enough, while the other is too nationalist. Both are covered separately in the sprawling, 1,750-page comptroller’s report, though Haredi enlistment has gotten most public attention.

Education Corps officers have complained to their superiors several times in recent years about rabbinic encroachment, but to little avail, the report says. Atop the command chain, the army’s deputy chief of staff and chief of personnel have studiously avoided taking sides. Whether because they dismiss the dispute as a petty turf battle or because they’re reluctant to confront the Orthodox lobby, they’ve ordered the squabbling units to work things out by themselves. After one blowup in 2009, a general appointed to mediate reported back that sides were divided by deep “ideological” differences that could only be resolved at the General Staff level. The senior command, however, has yet to address the issue, the comptroller reported.

The dispute reached a boiling point in January 2009, when the chief education officer complained directly to the army chief of staff about rabbinic behavior during Operation Cast Lead, Israel’s three-week incursion into Gaza. According to the education chief, Brig. Gen. Eli Shermeister, combat troops were receiving pamphlets and lectures “of a political nature” from military rabbis and various “unauthorized lecturers” who circulated freely among front-line units.

The chief of staff, Lt. Gen. Gabi Ashkenazi, responded within days by summoning IDF chief rabbi Brig. Gen. Avichai Rontzki to his office, along with personnel chief Maj. Gen. Avi Zamir. Ashkenazi warned Rontzki that activities like those the rabbinate was conducting undermined discipline, contravened army policy and “directly harmed the military.” Zamir was ordered to investigate further and return with conclusions. When Zamir met with Rontzki in February, however, he merely thanked him for his contribution to morale and urged him to avoid activities that “confuse” matters.

The comptroller’s report doesn’t detail the substance of the disagreements between the rabbinate and the Education Corps, but it drops enough hints to let informed readers connect the dots. The rabbinic pamphlets Shermeister cited were described in news reports shortly after the Gaza incursion. And while the comptroller doesn’t detail their content, the news reports did: The documents urged troops to “show no mercy” to the enemy, to view civilians as “not innocent” and to “ignore any foreign doctrines” that “confuse the logical way of fighting the enemy” — referring to international law and the IDF ethical code. Rabbis reportedly also told soldiers in morale-building talks that they were fighting a holy war for promised land and that Jews were forbidden to surrender even an inch of territory.

At the time, the news reports met widespread skepticism, as they were based mainly on accounts by the left-wing soldiers’ protest organization Breaking the Silence. The army command easily deflected the claims, while pro-Israel groups attacked them as defamatory. The comptroller’s report appears to be the first official acknowledgment that the IDF brass was aware of the rabbis’ activities and shared the critics’ alarm.

The Education Corps was created by Israeli founding father David Ben-Gurion in the 1950s as part of his vision of the IDF as a “people’s army.” The corps’ primary duty, the comptroller notes, is to inculcate the four-part “Spirit of the IDF”: combat ethics and “purity of arms”; the “traditions of the state of Israel, based on democracy and the rule of law”; the “traditions of the Jewish people”; and “universal moral principles based on the value and dignity of human life.”

But the Education Corps has its own internal malaise, discussed in a separate section of the comptroller’s report. Traditionally, the corps’ main interface with the troops has been the company commander, who conveys IDF values through informal chats and structured weekend programs. Repeated studies since 2008 have found, however, that many junior officers lack familiarity with the concepts they are expected to teach. As a result, officers often welcome the rabbinate’s assistance. With its far greater resources, including private donations, the rabbinate can send teachers into the field and subsidize overnight field trips to selected educational institutions — usually Orthodox and frequently settler-linked.

Moreover, the comptroller notes, the Military Rabbinate has been expanding its overall footprint because of the growing numbers of religious troops — meaning Modern Orthodox and settlers — in front-line combat units and among junior officers.

The comptroller acknowledges that the army’s plate is full defending the borders and preparing for future threats. Nonetheless, the report concludes, the General Staff can’t put off deciding what kind of army it wants, what it wants its soldiers to know and who should teach them. It’s important for the health not just of the army, but of the Israeli nation.

“The educational activities of the IDF have great importance,” the report says, “given the army’s duties in defending the nation, given the army’s important place in Israeli society and given the army’s nature as a hierarchical organization with authority over young soldiers and officers at a critical stage in the formation of their outlook as individuals and citizens.”

Israel’s top generals, lest we forget, share the democratic values of the nation’s founders far more than other elements of that nation’s leadership. Moreover, they have it in their power to shape the values of the next generation. They need to make up their minds to do what’s right.

When Rabbis Start Educating the Soldiers