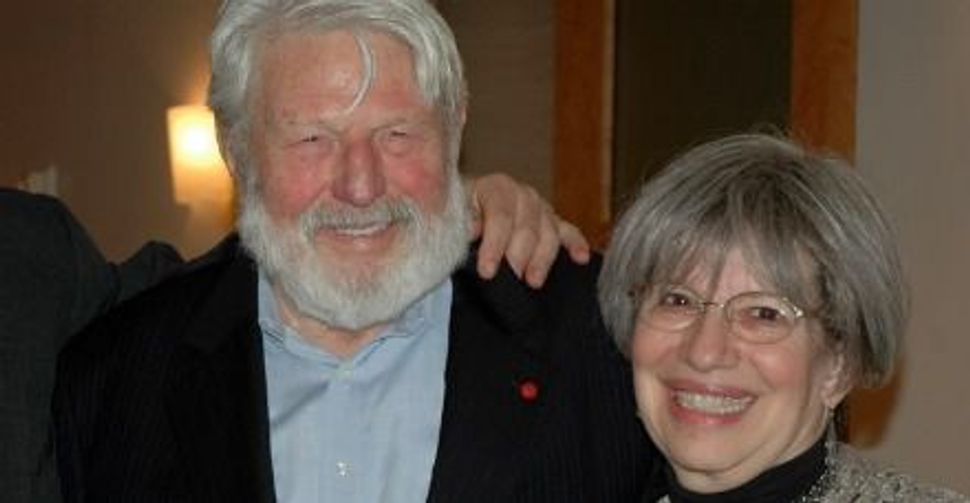 Image by courtesy of Leonard Fein 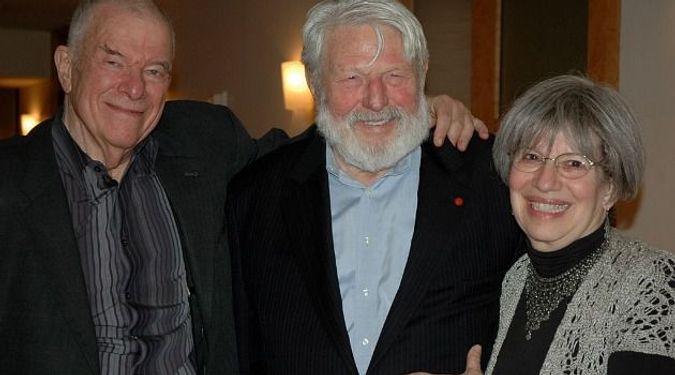 A Companion Lost: Tamara Brooks was a treasured companion of Theodore Bikel, center, and friend of columnist Leonard Fein, left. Image by courtesy of Leonard Fein

On May 2, Turner Classic Movies celebrated Theodore (Theo) Bikel’s 88th birthday by airing six of his films – by and large, as it happens, not the most memorable among them.

Not counting television roles, Bikel – or Theo, since I write as his friend – has appeared in more than 40 films, performed on stage and in concert, at conventions and in more intimate settings and, of course, in what has become his signature role, as Tevye in Fiddler on the Roof (more than 2000 times). For decades, he has been a unique performer, interpreter, creator of Jewish culture; the giant shadow he has there cast is utterly unique.

Theo’s Tevye, engaging as it surely is, takes on a rare seriousness in the actor’s articulation of one line of dialogue: With regard to his daughters Tzeitel and Hodel, both of whose marriages are in his eyes problematic, Tevye goes back and forth – “on the one hand,” and then “on the other hand” – until finally, true love is the winner. But with regard to Chava, who announces her intention to marry Fyedke, a Russian, not a Jew, Tevye’s back and forth goes this way: “How can I accept them? Can I deny everything I believe in? On the other hand, can I deny my own daughter? On the other hand, how can I turn my back on my faith, on my people? If I try and bend that far, I’ll break. On the other hand … No. There is no other hand.”

Bikel knows that the entire gravitas of the play is contained in those last five words, and the great skill he brings their articulation is a perfect match for their importance.

On May 19, Tamara Brooks, the great love of Theo’s life, suffered a fatal heart attack while they were visiting friends in Houston. Tamara was herself a storm of a person, a most distinguished and quite tireless conductor, principally of contemporary choral music. She was a woman whose very strong opinions regarding music and its performers were dwarfed by her tenderness towards Theo, 17 years her senior. Tamara’s immense skills as an artist were widely acclaimed; she was Theo’s peer, decisively not his pygmy; she was very much her own person, with her own dossier of rave reviews and often innovative performances, with her own most venerable record as a music pedagogue.

Yet, for those of us who came to know her through her relationship with Theo – they were married, after years of companionship, just four years ago – she was above all his person. It was how he was with her and she was with him that dwarfed everything else.

My own history with Theo goes all the way back to his performance at the University of Chicago Hillel house, when I was an undergraduate. I have since then known him not only as a stellar performer of Jewish music (he can sing in 22 languages, but Hebrew, Yiddish and English lead the rest) but also as Senior Vice President of the American Jewish Congress; as a leading voice for the freedom of Soviet Jewry; and as an ardent advocate of civil rights and human rights and workers’ rights. What began as a brief acquaintance over the years ripened into a close friendship.

It is odd, but perhaps instructive, to scan through the myriad of memories and come to one that rises above all the rest. Six years ago, I wrote of an evening I spent with Theo in Kibbutz Geva in the Jezreel Valley, where we sat together with the members of Geva’s popular folk choir, the Gevatron, and sang, mainly the old songs, songs of love and innocence, songs mostly of a time gone by. No performance; just a bunch of people who started singing at nine in the evening and finished some time around one in the morning. Songs, some of them long unsung, dredged from dusty memories and greeted like long-lost friends.

And suddenly without warning, someone started and all joined in the haunting, yearning melody of Psalm 34, “Mi haish?” “Who is the person who treasures life, who loves each day to see the good? Guard your tongue from evil and your lips from speaking deceitfully; turn away from bad, and do good, love peace, and seek it out.”

The detail I omitted in that telling goes to our walk to the somewhat ramshackle room where the singing happened. I was having a bad back day, and was walking – hobbling, more accurately – very slowly towards our destination, Theo at my side. And suddenly, he began to rub my back with his hand, ever so soothingly.

End of story, except to note that there was such wondrous gentleness in his action that I can recall the sensation of it even now, years later.

And now my friend is once more alone. On the one hand, he is 88 years old. On the other hand, he has kept to an intimidatingly hectic schedule of performance.

On the one hand, he is, as one may imagine, devastated by his loss. On the other hand, his energy at 88 is legendary, his life force extending well beyond all the movies, the plays, the concerts, the 40 or so recordings.

On the one hand, the one that caressed my back … no, there is no other hand. Tamara, in her absence, will remain an enduring presence. And Theo, God willing, will do exactly what she so certainly would have wanted: continue to do good; love peace and seek it out; fight the good fight; sing the good song.