Obama Gets Copy of Washington Letter 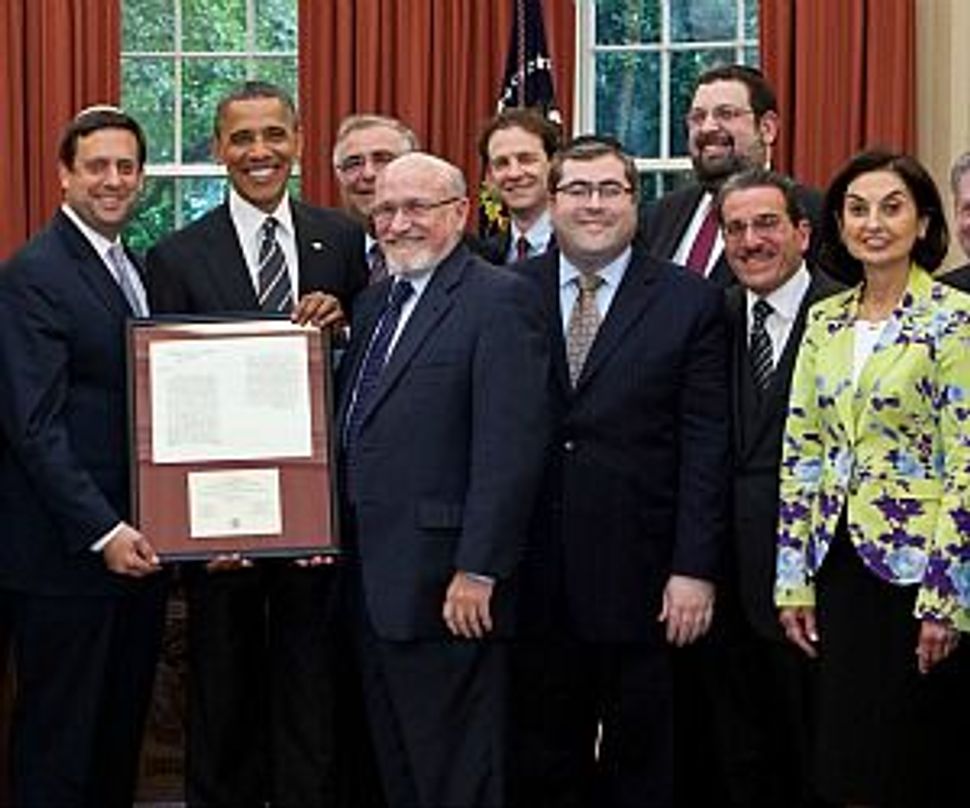 Weeks before George Washington’s historic letter to the Jewish community goes on display at the National Museum of American Jewish History, President Obama received a copy of the document from a delegation of Orthodox rabbis and communal leaders visiting the White House.

The letter, in which President Washington promises America would give “to bigotry no sanction, to persecution no assistance” was sent in 1790 to the Hebrew Congregation in Newport, Rhode Island. The congregation was based in the Touro Shul, an Orthodox synagogue. As such, the Orthodox Union takes special pride in the letter and decided to present President Obama with a copy at the conclusion of their meeting on June 5. A similar copy was given to President George W Bush when he was in office.

Nathan Diament, the OU’s executive director for public policy who gave Obama the document, reminded the president of his speech last week in which Obama referred to an appeal made by the Jewish community to President Abraham Lincoln 150 years ago to overturn a discriminatory measure imposed by General Ulysses Grant. Obama used the example to praise the Jewish community’s history of advocacy to the government. “So we wanted to present him with the letter which is the first time American Jews did just that with a president,” Diament said.

Washington’s letter has been hidden from view for the past decade and following a series of reports by the Forward will be presented once again to the public starting June 29.

Obama’s meeting with Orthodox leaders completes the President’s round of talks with all three key denominations. He delivered a keynote speech in the fall at the biennial meeting of the Union for Reform Judaism and met with leaders of the Conservative movement at the White House.

According to accounts provided by participants in the closed-door meeting with Orthodox leaders, Obama, just as he did a week earlier with the Conservative movement, gave an open and detailed account of his relations with Israel, an issue that has won him criticism especially in Orthodox circles.

To the small group attending the meeting, Obama said there should be no doubt about his “fidelity” to Israel, adding a request to understand that disagreements do not necessarily impact the friendship between the nations.

When asked what lesson he had learned from attempts to broker an Israeli–Palestinian accord, the President responded that his key takeaway is that “it’s really hard” and that trying to get the parties to agree entails great potential for misunderstanding. Obama attempted to dispel the notion that he had pressured Israeli prime minister Benjamin Netanyahu unfairly and said that his administration was, in fact, “more attentive” to Israel than to the Palestinians.

The President described Israel’s government as having been extreme right and said that Netanyahu, just like any other world leader, does not want “any restraints,” and does not want to be seen as a weak leader. On the Palestinian side, Obama sounded even more pessimistic, telling the audience President Mahmoud Abbas may not want to close a deal and that his views “have deteriorated” to the point at which the window of opportunity for a peace agreement may have already closed. Obama did pledge, however, that the United States would keep trying to promote peace.

In the meeting, which lasted 20 minutes, the Orthodox representatives also raised issues that are of specific concern to their community. They asked Obama for help in getting more federal funds for non-public schools, and discussed the boundaries of freedom of religion following the Obama administration’s clash with the Catholic community over the demand that health insurance plans provided by religious organizations offer contraceptive coverage.

Obama Gets Copy of Washington Letter