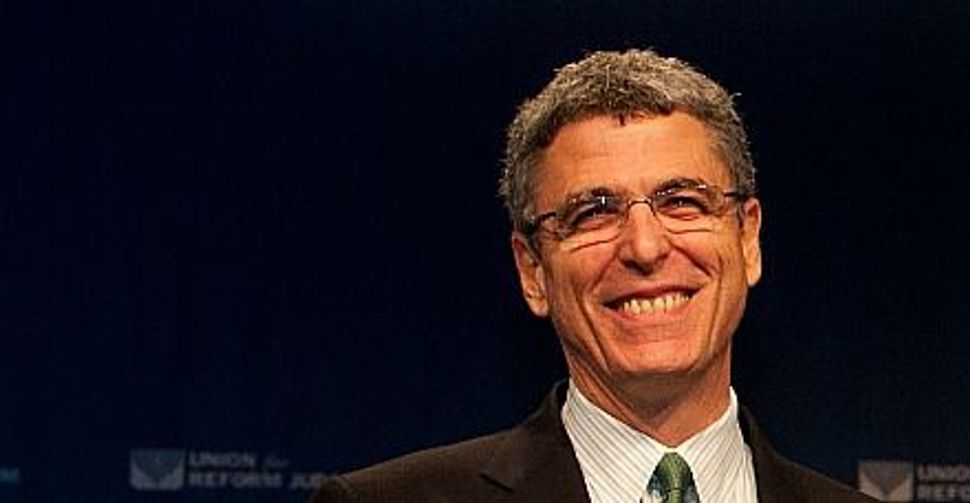 Image by Courtesy of urj

They didn’t exactly turn handsprings, but their cheering was unmistakable. “This is a historic day for Israelis and Jews around the world,” proclaimed Rabbi Julie Schonfeld, executive vice president of the Conservative Rabbinical Assembly. The head of Israel’s Reform movement, Rabbi Gilad Kariv, declared that the decision is “an important breakthrough in the effort to advance freedom of religion in Israel.” Opposition leader Shelly Yacimovich called it “an important turning point in the relationship between the State and all streams of Judaism around the world.”

Like starving puppy dogs thrown a few scraps from a banquet table at which they are not allowed to sit, they are overcome by gratitude. Even though they all are quick to announce that this is only a “first step,” that the scraps will soon be of higher quality and their volume much greater, their celebration of victory is heartfelt and substantial.

Victory? Here is what the Reform and Conservative movements have achieved, pending approval by Israel’s Supreme Court: Fifteen of their rabbis may serve rural and farming communities in Israel. These will be funded by the State (as are 4,000 Orthodox rabbis) — but not, mind you, by the Minister of Religious Services, who threatened to resign were he required to pay the requisite salaries, but by the Minister of Culture and Sport. There was a big flap about whether these newly subsidized rabbis would be called “rabbis” or would be designated as “community leaders,” resolved by calling them “rabbis of non-Orthodox communities.” But calling them rabbis doesn’t give them rabbinic authority. They are explicitly denied any authority over religious and halachic matters, such as, inter much alia, marriage and divorce.

In one view, this is nonetheless an auspicious, even historic, decision. But if you take the time to think about what may follow this “first step,” what the second and twenty-second step might be, another assessment seems more than merely plausible: The Reform and Conservative rabbinate in Israel will end up complicit in the web of corruption that now infects the Orthodox rabbinate. The moment that government becomes the fiscal sponsor of religion, such an outcome is inevitable. Questions of accountability and transparency, questions of authority and probity are all set aside as political arrangements are hammered out.

This would likely be so whether the Knesset were composed of university professors or a random selection from the Voter Registry. In fact, it is composed of a motley crew, motlier perhaps than any in Israel’s parliamentary history. Take, for one example, Yulia Shamalov-Berkovich, an MK of the Kadima party. Ranting the other day about human rights organizations that support African immigrants in Israel, she called them phonies and said she “would jail them all for incitement of Jews against Jews. “This,” she went on, “is solution number one: to jail all human rights [activists].” Or, back to the matter of recognizing a few “non-Orthodox rabbis,” take Moshe Gafni, MK from the United Torah Judaism party and the powerful chair of the Knesset Finance Committee: “Suddenly there’s money for reform and conservative clowns that see Judaism as a joke.” To such as he, the State has until now entrusted the definition and management of Judaism. Now, the State has dented the exclusivity Orthodoxy has enjoyed. Time will tell whether the dent is meaningful.

The conventional response is that no such prospect is in the offing. That option, as desirable as it might be, is simply off the table, far too radical to contemplate.

Clarity: America, with its somewhat shaky wall of separation between church and state, is overwhelmingly the most religiously enthusiastic of Western nations. Separation has not discernibly weakened religion in America, notwithstanding the chronic complaints of religious zealots. The American model is not an attack on Orthodoxy nor a vote for secularism; it is a vote for rendering unto Caesar that which is Caesar’s, and no more than that. It is a vote for religious pluralism and freedom.

The one undoubted cause for celebration of Israel’s new policy is that for the very first time, a woman — Rabbi Miri Gold, originally of Detroit and now of Kibbutz Gezer — will be entitled to call herself and be called “rabbi.” She is the indomitable woman who brought the original petition for recognition to the Supreme Court. Although it will still be up to the State to decide how much rabbinic heft she will have — not much, for the time being — the very fact of her entitlement, whatever its limitations, warrants a brief prayer of thanksgiving.

Still, non-Orthodox understandings of Judaism have a very, very long way to go, a way sure to be strewn at every step with contentious debates. What begins as an ostensible breakthrough may soon be seen as a polluted trap.