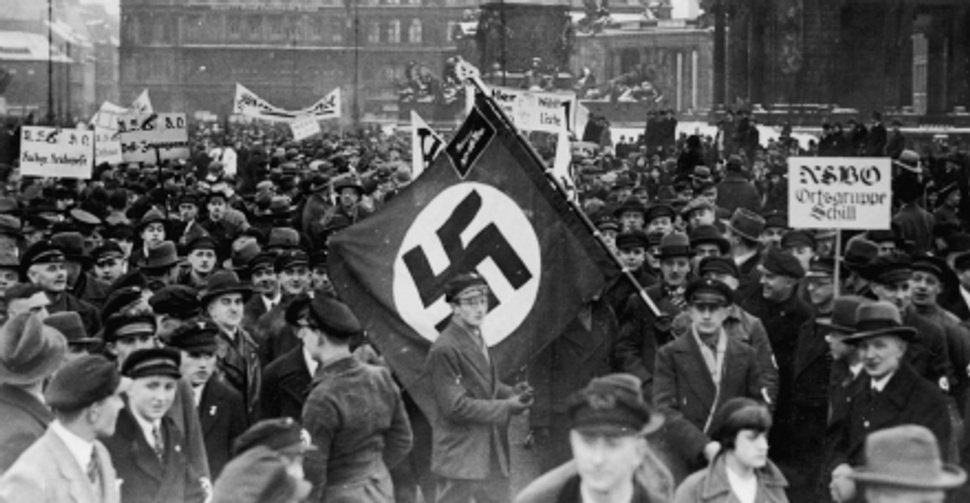 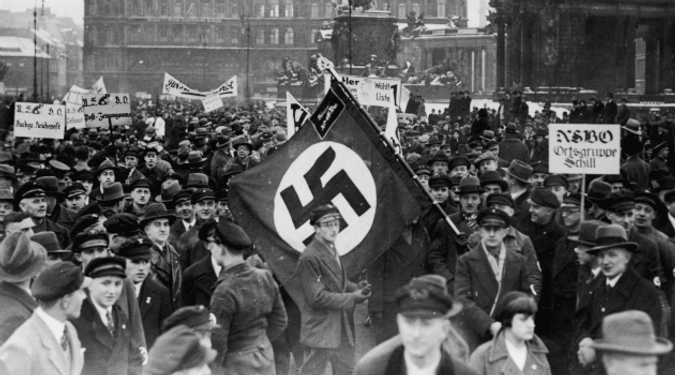 Rising Menace: Despite the obvious writing on the wall, many American and German Jews failed to adequately recognize the devastating threat posed by Nazism. Image by getty images

In the very early 1920s, when Adolf Hitler was still only a local rabble rouser in Munich, two men from Munich’s American consulate made a point of observing his rallies: Robert Murphy, the young acting consul, and Paul Drey, a German employee who was a member of a distinguished Bavarian Jewish family.

“Do you think these agitators will ever get far?” Murphy asked his colleague.

“Of course not!” Drey replied. “The German people are much too intelligent to be taken in by such scamps.”

Since the recent publication of my book “Hitlerland: American Eyewitnesses to the Nazi Rise to Power,” many people have asked me why American diplomats and journalists were often slow to recognize the threat that Hitler represented. It’s a legitimate question, requiring more than a simple answer. But an equally legitimate question is why many German and American Jews were often just as slow in waking up to the Nazi danger.

Or slower. In fact, some Americans living in Germany were more alarmed by what they were witnessing than German Jews appeared to be. In late 1932, as Hitler was close to taking power, Edgar Ansel Mowrer, the Chicago Daily News correspondent who was one of the most perceptive observers on the scene, attended a dinner at the home of a prominent Jewish banker. All the other guests were also Jewish bankers, and Mowrer was startled to hear that some of them had given money to the Nazis at the urging of non-Jewish German industrialists.

When Mowrer expressed his astonishment at his dinner companions’ “strong suicidal urge,” his host insisted that Hitler shouldn’t be taken seriously. The implication: The Nazi leader would never act on his most extreme rhetoric, and besides, the donations would keep him reasonable. To Jews who were more willing to listen, Mowrer’s advice was unequivocal: “Get out, and fast.”

True, many German Jews understood the danger early on and were all too eager for others to understand their dire situation, as well, including the relatively rare American Jewish visitor like labor organizer Abraham Plotkin. When Plotkin arrived in Berlin in November 1932, German Jews peppered him with questions about Jewish life in the United States. When he said there was anti-Semitism there, too, they scoffed at the notion that it was at all comparable. “Do they ever throw Jews out of subway cars in New York?” they asked, enumerating other acts of violence.“There is hardly a Friday night that we pray without trembling.”

And yet when Plotkin went, on December 16, 1932, to see a Nazi rally, which featured chief propagandist Joseph Goebbels, he found the event anticlimactic. “I confess my disappointment,” he wrote in his diary. “I had come to see a whale and found a minnow.” On January 30, 1933, Hitler was named chancellor.

After Kristallnacht, which took place November 8 and 9, 1938, and the September 1, 1939, German invasion of Poland that launched World War II, there was near panic among German Jews, and they besieged the U.S. Embassy in Berlin seeking visas. But given the strict quota system the United States maintained, even consular officials who were sympathetic to their plight ended up turning away many of them.

And some Americans in Germany became hardened to the desperate appeals of local Jews. Howard K. Smith, a young reporter who would later go on to be the co-anchor of the ABC Evening News, received a knock on his door at 2 a.m. in October 1941 from a young Jew who reported that he had been briefly detained by the Gestapo, which was raiding apartments of Jews across town. He pleaded for Smith’s help in getting an American visa. As Smith wrote in his memoir about his Berlin experiences, he told his visitor that he was exaggerating the danger, and then he offered him a cigarette and shoved him out the door. To his credit, Smith felt guilty later and wrote about his “callousness,” but noted that there was little he could have done in any case.

By contrast, some Americans displayed remarkable courage. Muriel White, an American woman who had married a German count in 1909 and settled in Germany, attended a dinner at the Adlon Hotel, in Berlin, in the summer of 1937. An American diplomat witnessed her exchange with a gauleiter, a Nazi district leader, seated at her table. She asked him whether it was true that the party sometimes called “deserving” Jews honorary Aryans. When he replied in the affirmative, she asked, “Can you tell me, then, how I could become an honorary Jew?”

Despite the overall American record of failing to marshal anything close to an adequate response to what was happening to Jews in Germany and later in Nazi-occupied Europe, there were other acts of courage and compassion — although not necessarily with happy endings. Murphy didn’t forget about his German Jewish colleague, Drey, after the Nazis took power. As late as 1938, Murphy flew back to Munich to urge him to flee the country, assuring his friend that he’d find a job for him elsewhere. Drey thanked him but turned him down, saying that the “temporary madness” in his country would soon pass. Drey died later in Dachau.

With the benefit of hindsight, such behavior appears perplexing, even infuriating. But for many well-educated Jews, non-Jews, Germans and Americans, Hitler’s rants and behavior seemed too bizarre, too far removed from any rational frame of reference, to be taken seriously. Which is why so many appeared to be in denial about what was happening until it was too late.

The fact that Jews were no exception in this regard is not a reason for shame. But it is a reason for reflection.

Andrew Nagorski, a former Newsweek foreign correspondent, is the author of “Hitlerland: American Eyewitnesses to the Nazi Rise to Power.”