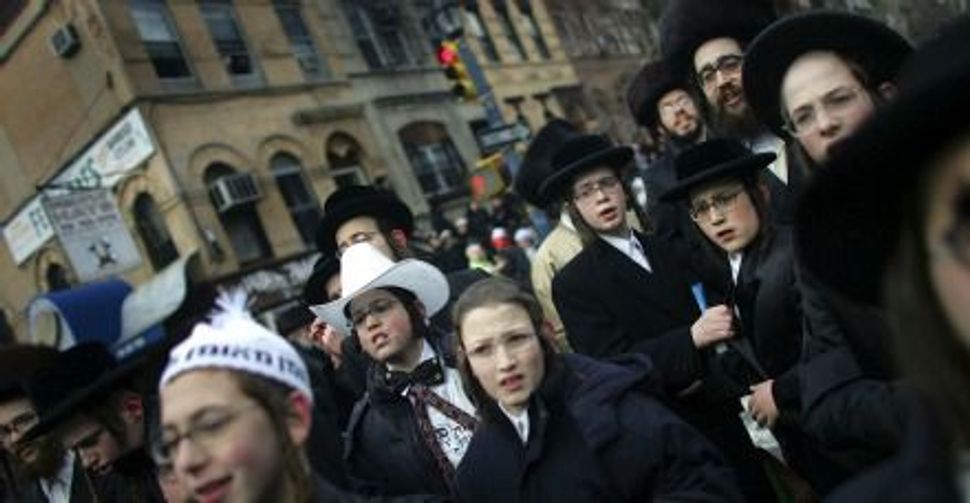 Americans have long debated whether the poor are worthy of our help. Most people don’t put it that way, of course, because it seems cruel or, at very the least, inappropriate. But the question flows through the public discourse whenever proposals for reforming public welfare come before Congress, or an extension of housing benefits is on the legislative agenda. Do the recipients of such aid deserve it? Is it worth the cost to taxpayers? Does the safety net help those who truly are in need, or does it shackle them to the kind of government assistance that stifles motivation and derails self-sufficiency?

We’re used to hearing that argument play out with regard to racial and ethnic minorities — the so-called Welfare Queens, the undeserving poor. Now it’s time for the Jewish community to engage in this delicate, complicated debate.

The survey just released by UJA-Federation of New York made headlines for what it found: New York’s Jews are more numerous, less educated, more religious and poorer than they were a decade ago. The findings confirm what many suspected and, in some cases, feared: that the middle is shrinking. The religious middle — that is, Jews who identify as Reform or Conservative — is losing shares to the Orthodox and the unaffiliated, and that poses a direct challenge to the open, egalitarian, inclusive Judaism that has been ascendant in this country for the past half-century.

There will be plenty to say about that in the coming days and months. But it is the growth in poverty that draws our attention now.

The survey included the eight counties served by the New York Federation — the city’s five boroughs, plus those of Westchester and Long Island — and found that one-fifth of Jews live in poor households. The proportion increases when the suburban counties are omitted: 27% of Jews in New York City live in poor households, only slightly less than the 30% of poor people of any religion.

A decade ago, those numbers were smaller, and, as the survey reveals, the increase is not only due to the recession battering so many Americans. Nor is it only caused by the 24% of elderly Jews who live in poverty, a percentage that has declined over the past decade but still remains disgracefully high, especially among older refugees from the Former Soviet Union.

It’s the ballooning birthrate in Orthodox families, particularly Hasidic ones, that fuels this trend, and that is not expected to abate when (or if) the overall economy improves. More than two out of every five Hasidic households — a full 43% — are poor. And remember, those families often comprise five, seven, ten children. The percentage of New York area children in Hasidic families (37%) is nearly as high as the percentage growing up in all the non-Orthodox households combined (39%).

And the birthrate for non-Orthodox parents? 1.3 births per woman. Well below replacement level.

The poverty afflicting this large and growing proportion of devout Orthodox Jews in New York is a different kind of poverty than we are used to facing historically. It’s not the deprivation of immigrants arriving with a few dollars in their pockets. It’s not the desperation of refugees clinging to these liberating shores. It’s not a poverty born of the lingering discrimination that still leaves too many Americans without the education, skills and reasonable hope of escaping a neverending cycle of need.

This is a poverty of choice, or perhaps more generously, a poverty of default. It is voluntary impoverishment.

Its roots are not mysterious: Among the Haredim — that is, those ultra-Orthodox Jews who belong to Hasidic communities and those known as “Yeshivish” Jews — large families are prized and, indeed, demanded, leaving women little opportunity to work outside the home. For men, the highest duty is not to earn a living but to study Jewish texts. And in far too many of the religious schools serving these neighborhoods, secular subjects and skill-based teaching have disappeared, making employment difficult even if it is desired.

It is a poverty ameliorated by a communal network of support that provides food, housing, health care and other services to an admirable degree. But it is also enabled by the welfare state — that is, the American taxpayer. At least 15% of Jewish households in this survey receive some form of public assistance; as many as 11% receive food stamps.

Do they deserve it?

This is a question that has been debated by Jewish sages for centuries, with some rabbinic sources taking surprisingly negative views. “Even the Rambam speaks harshly about persons who assume that the community will support their choice of self-impoverishment,” said Saul Berman, a Modern Orthodox rabbi and scholar. In other words, Jews don’t express their piety through a vow of poverty.

For those of us raised on conventional middle-class values — demanding that we work hard, have no more children than we can reasonably afford, strive for self-sufficiency and, more recently, create a semblance of egalitarianism at home — the Haredi lifestyle is oppositional. But then, our middle class obsession with secular materialism surely strikes the Haredim as impious and decadent, especially when devout Orthodox Jews believe it is their duty to embrace a Torah-centered way of life.

This tension has to be confronted if we are to wisely and morally consider how to parcel out precious communal resources to the poor. Important though it is to support those who study Torah and Talmud, it is even more essential for the community to care for the elderly, disabled and others who are poor not out of choice, but because of unfortunate circumstances. The moral claim goes first to those who are poor involuntary, and so should our dollars.

There are political ramifications, as well. The UJA survey prompted predictable responses by those on the Jewish right, who gleefully speculated that the growth in the Orthodox community would finally put a serious dent in the stubborn devotion of New York Jews to liberalism and the Democratic Party. That might happen. The rightward flank in just about any religious group in America tends to support more conservative social positions on abortion, same-sex marriage, parochial school choice and the like; Orthodox Jews are no different than evangelical Christians in this regard.

But those who cloak their political views in religious garb have an extra duty to be consistent. And they can’t be consistent if they rely on food stamps, Medicaid and day care subsidies and then vote for parties that are against government spending. They can’t expect the American taxpayer to support poor Jews and not expect equal support directed towards other destitute communities. Nor can they ignore the rampant economic inequality enabled by a political system that privileges the very rich.

Although the Jewish landscape in New York is unique, it mirrors trends in Israel and elsewhere, which is why this tension over the “undeserving poor” cannot be ignored. Poverty among American Jews is not just a historical footnote. It’s the troubling reality for hundreds of thousands of our brethren.