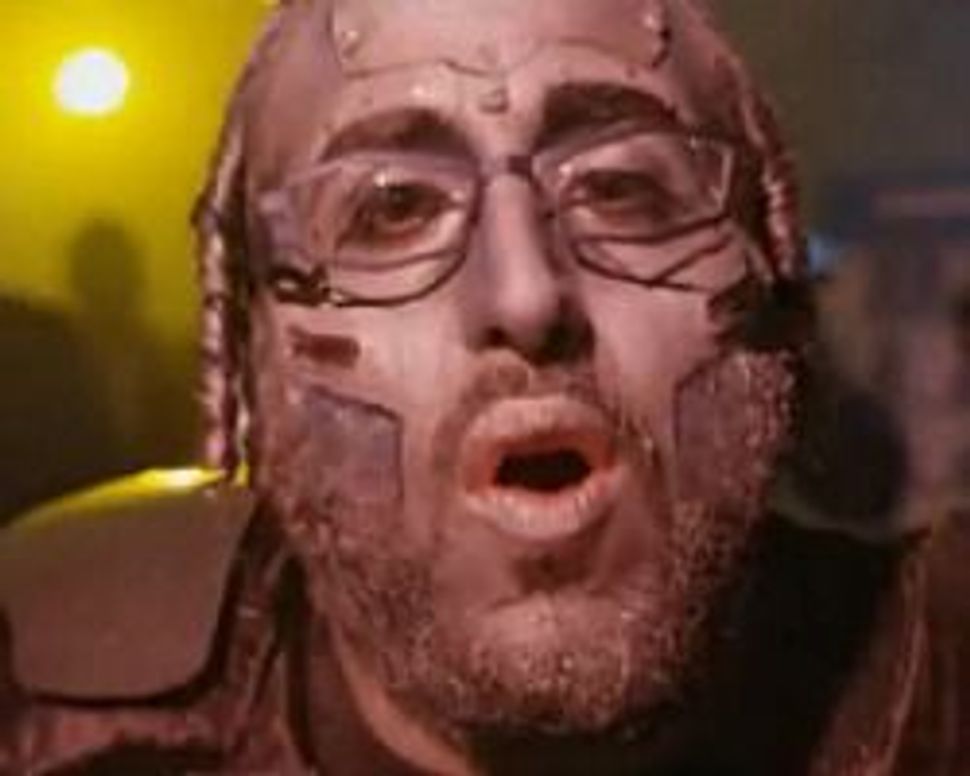 I think I’ve figured out why I find Lipa Schmeltzer’s anti-Internet-rally-meets-Lady Gaga music video so engrossingly weird. And it’s not just the break-dancing Hasidic robots.

Lipa’s video is weird for the same reason that Tom Hanks looks strange in Polar Express and that this android is really creepy.

That reason: Schmeltzer’s “Hang Up The Phone” video is deep in a pop-cultural Uncanny Valley.

Bear with me a minute.

Schmeltzer’s pop is poppier than any other Hasidic pop star’s pop. Compare “Hang Up The Phone” with this from Mordechai Ben-David, or this from sometime-Lipa collaborator Avraham Fried. Fried and Ben-David sing over klezmer sounds and male choruses on videos that feature colored lights and slow cross-fades. Schmeltzer’s got synthesizers and AutoTune and toys that come to life like in that N’Sync music video.

But while he’s pretty pop, he’s still a few degrees off something of you would expect see from, say, Katy Perry. (Or from Matisyahu, whose primary audience is not Orthodox, and who doesn’t count as a Hasidic act in the same sense.)

Here’s where the Uncanny Valley comes in.

Sometimes humanoid robots and CGI people look really creepy. This concept is called the Uncanny Valley, the idea that artificial things that are lifelike but not quite realistic are made spooky by virtue of the way they take the familiar and make it strange.

In other words, somewhere between Elmer Fudd – who isn’t supposed to look real – and the blue people in Avatar – who really do look real – is a Japanese robot that creeps everyone out.

I hereby posit a pop-cultural Uncanny Valley. If Avraham Fried is Elmer Fudd, vaguely nodding towards mainstream pop, Schmeltzer’s “Hang Up The Phone” is the Japanese robot, down at the valley’s spookiest depths.

Schmeltzer’s earlier videos were more Fudd-like. See, for instance, this 2009 clip, produced for the Orthodox outreach group Oorah (which has lost millions in bad investments, as I reported in January). The video, a survey of ethnic stereotypes that turns downright racist when Schmeltzer’s backup dancers don blackface, is well outside the bounds of anything an Orthodox act would ever do.

“Turn Off The Phone” is different. He’s got the synths and the AutoTune. Plus the dancing is on point, the editing is professional, and the whole thing feels expensive and relatively slick, like it wasn’t put together in someone’s basement.

Schmeltzer is pushing Hasidic pop towards the mainstream, but he’s not doing it quite right. He’s fallen into – or perhaps dug? – an Uncanny Valley. I can’t see him climbing out any time soon.