The Marketplace for Synagogues 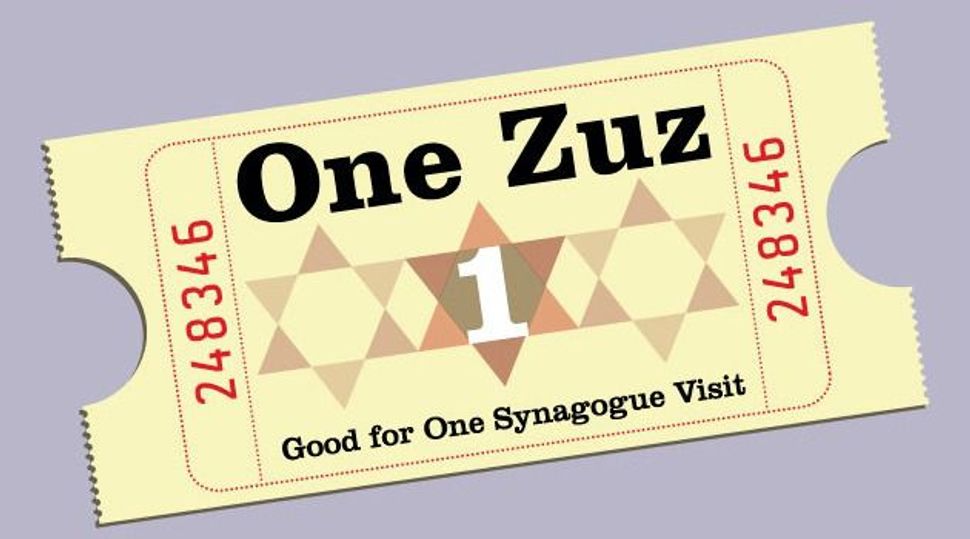 Free Market Faith: There are more efficient ways to manage all markets, including the one for synagogue membership.

About two-thirds of all Jews don’t belong to a synagogue. Some blame the unaffiliated for not joining; others blame the synagogues for not being interesting enough to join. I blame our system of synagogue membership.

Any economist worth his salt would recognize the problem. Synagogue membership is like gym membership. It’s expensive and poorly used, and therefore it has little economic utility to most potential buyers. Most Jews who are members attend their synagogues a small handful of times a year. Against the cost of annual membership, the per visit cost is astronomical. No wonder most Jews rightfully conclude that synagogue membership is a bad deal.

There is a better way. A solution came to me by way of my habit of synagogue polygamy, or what I like to call polysyny. While I maintain a loyal attachment to my Conservative synagogue, I regularly visit two other synagogues, both Orthodox. But the Conservative synagogue is the only one that gets my membership dues. Doesn’t seem fair, does it?

What if I could divide my synagogue dues based on my attendance? A simple solution emerges. Let’s say I give the equivalent of one year’s synagogue membership to my local federation. In return, it would give me 54 coupons to spend on synagogue attendance as the year goes on (54 being the number of Torah portions in the year). We could call each coupon a zuz (for the currency of choice from Chad Gadya).

I could deposit my zuzim in a special synagogue “zuz box” as I enter the building, and the synagogues could redeem each zuz for a certain amount of money at the federation offices. Federations could sell special High Holy Day-only zuzim for those Jews who want to attend at only that time of year.

Now, if my loyalties and attendance were divided, so, too, would be my synagogue membership dollars. This would end the problem of people like me freeloading.

But think, as well, how enterprising congregations could benefit dramatically from this scenario. They could compete for zuzim by offering a better Kiddush luncheon, better children’s services or a special speakers series. They could create multiple mini-congregations of different denominations and different musical styles under a single roof — all the better to create a supermarket-style offering that would appeal to more attendees. They might compete with services geared to special needs attendees and their families. Or they could simply guarantee a 90-minute service, including a full Torah reading, without a sermon.

They might start “zuz drives,” under which they ask for zuz pledges in return for discounted tuition at their Hebrew school and for early childhood programs. The really smart synagogues would launch loyalty programs under which people who had committed their zuzim pledges for several years running would get a free trip to Israel.

The more entrepreneurial synagogues would do quite well under this system. Chabad already has this sense of innovation, but without the monetary payoff.

The reason is that entrepreneurs don’t believe in zero-sum markets. They recognize that by expanding offerings, you often expand demand. Right now, synagogues have one-third market penetration among their target audience. That’s pretty poor, considering that Passover and Hanukkah observance enjoys roughly 90% market penetration. Clearly, Jews are willing to do Jewish things — just not in synagogues.

Rather than pay consultants and idea mavens to imagine what synagogues should do differently, we should just let synagogues experiment and be incentivized to succeed. If we took the current share of the target market to 50% from one-third, think what that would mean to the vitality of Jewish life? The Laffer Curve applies: If the supply of Jewish synagogue experiences increased, demand would follow.

A smart federation could well conclude that the best way to invigorate Jewish life in its community would be to subsidize the value of zuzim so that they become easier to buy, especially for young families, seniors and students — thereby opening the doors of the community to many who are now priced out of it. Day schools and summer camps could recognize that giving away zuzim would provide new families with an inducement to join. The synagogues might return the favor, offering day school and summer camp scholarships to families who commit their full allotment of zuzim.

Now, I do understand that there would be some who oppose this idea. Large synagogues would resist losing their monopolies. Small ones would resist losing the certainty of their membership rolls. And still others would say that a polysyny system would turn synagogue attendance into an economic transaction, where Jews would come to synagogue asking whether they will get their money’s worth. Problem is, we already have people asking that question. We just don’t have a good answer.

The Marketplace for Synagogues