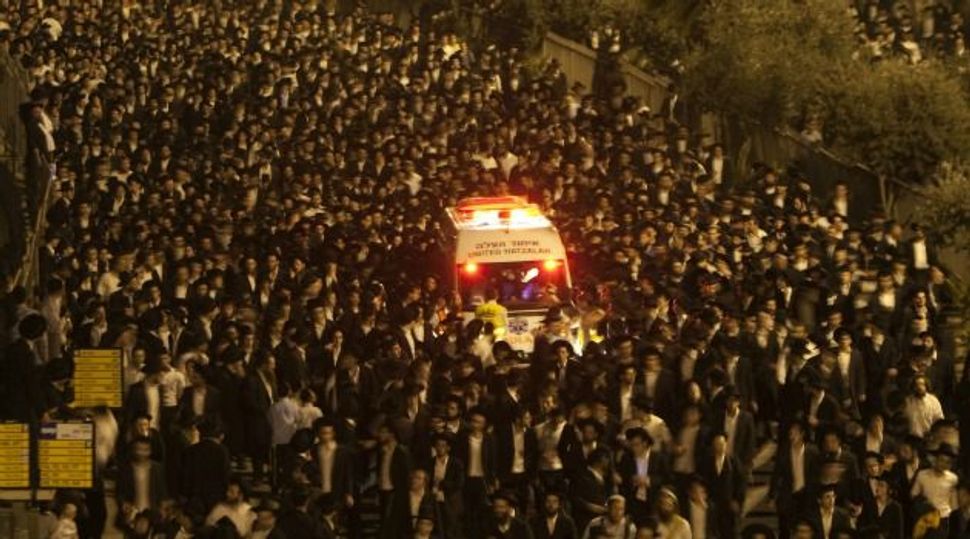 Rabbi Yosef Shalom Elyashiv, the 102-year-old Lithuanian religious figure who died this week, is being hailed in some circles as the “greatest leader of his generation”. He may have been great to some men, but for women, his ideas and rulings were often the cause of enormous pain.

For example, he was a vigorous adherent of the most oppressive and retrograde views on the issue of agunot, or women who are denied religious divorce. He regularly promoted a 16th century opinion by the Maharshdam (Rabbi Shmuel di Medina of Saloniki) according to which a man may never be pressured in any way to give his wife a get, or divorce, ever. Moreover, he believed that if any pressure is exerted by the woman, such as requests to compromise on financial settlements or custody issues, then the get will be considered invalid. Any children born thereafter will be mamzerim, or forbidden from ever marrying a Jew.

This position renders rabbinic judges completely helpless in cases of recalcitrance on the part of husbands. Elyashiv’s opinion effectively nullified the 1994 Law of Sanctions, a law passed in the Knesset with the support of the religious state establishment at the time, which gives rabbinic judges the power to enforce sanctions against recalcitrant husbands. These sanctions – which include revoking a driver’s license, revoking a passport, and in some cases imprisonment – are used regularly by rabbinic judges to help women level the playing field when it comes to exiting from Jewish marriage. But to Elyashiv, sanctions were not permissible, and the rabbis should never pressure a man to give a get. (It should be noted that many rabbinic rulings since the 16th century have taken a much more humane approach. Rabbi Haim Pallagi, the chief rabbi of the Ottoman Empire in the 19th century, ruled that if a husband and wife live apart for 18 months, the court must force the man to give a get).

Elyashiv’s retrograde approach played a strong role enabling men to blackmail women during divorce. It is this dynamic that facilitated the formation of the so-called “Agunah Fund”, a pool of money that the rabbinic judges have which they use to literally pay men in order to give their wives a get. The legality of this fund was unfortunately upheld by a 2010 High Court ruling, based on a petition brought by Susan Weiss of The Center for Women’s Justice.

One agunah named “Orit” whose story was reported in Maariv several years ago, suffered personally from Elyashiv’s refusal to allow the rabbinical court to help her. She described a marriage full of physical, emotional, and financial abuse, from which she had to escape in fear of her life. The rabbinical judges actually issued a “hiyuv get,” an order to give a get, but she never knew about it because the husband turned to Elyashiv for support, who ruled that the parties should come to an “understanding” rather than pressure the man.

“I don’t understand how a rabbi can issue a ruling on a matter of life and death without even talking to the parties,” Orit’s advocate told Maariv at the time. “We’re not talking about koshering a knife here.”

The idea that even abused women have no power in divorce, and that any use of pressure against the man renders a divorce invalid, is probably the strictest possible interpretation of Jewish law on the matter. It leaves many women without any recourse at all. And attempts by women’s groups to engage in dialogue about the matter have failed. The most notorious case was when a 2006 conference for rabbinic judges on the issue of agunot was cancelled, reportedly due to pressure from Elyashiv. It is apparently due to Elyashiv’s pressure that the chief rabbinate has not adopted the widespread use of prenuptial agreements to prevent the agunah problem.

It wasn’t just on matters of divorce that Elyashiv expressed a troubling attitude towards women. He came out strongly against academic degrees for women from the Bais Yaakov seminaries. On issues of infertility, Elyashiv offered some very strict opinions about surrogate motherhood, which effectively leave many women without options for becoming mothers. He also reportedly warned parents not to allow daughters older than three to sing the Ma Nishtanah in front of men other than their father or brothers.”

His position on gender segregation was also problematic. Athough Elyashiv was widely cited earlier this year as “surprisingly” coming out against forced segregation between men and women on public streets, it should be noted that he said that he was actually in favor of such separation but simply opposed separation that uses force, or violence. Persuasion should be done only with words, he said. All told, Elyashiv’s record on women’s issues was troubling at best, and highly detrimental at worst.

Even though Elyashiv is no longer among the living, his followers seem to be ready to continue his path. Earlier this year, many women’s groups expressed very strong opposition to the impending appointment of Elyashiv’s protégé Rabbi Nahum Prover as a judge to the rabbinic court. In his rulings, according to a letter from ICAR (The International Coalition of Agunah Rights) protesting his appointment, “Prover created a moral basis for get blackmail while pointing a blaming finger at the victim.”

In one particularly shocking ruling, Elyashiv’s son-in-law, Rabbi Yitzhak Silberstein, ruled that a girl should be commended for cutting her legs and causing them to bleed in order to find an excuse to wear long skirts. And so the legacy continues.

My condolences go out to those who mourn the death of Rabbi Elyashiv. Meanwhile, perhaps this is a reminder that the Jewish community should not merely accept that rabbis have status, but should actively consider and contemplate who we choose to call our leaders.

Dr. Elana Maryles Sztokman is the Interim Executive Director of JOFA, the Jewish Orthodox Feminist Alliance. The views presented in this article are entirely her own.