Stoking Fears of ‘Other’ Obama 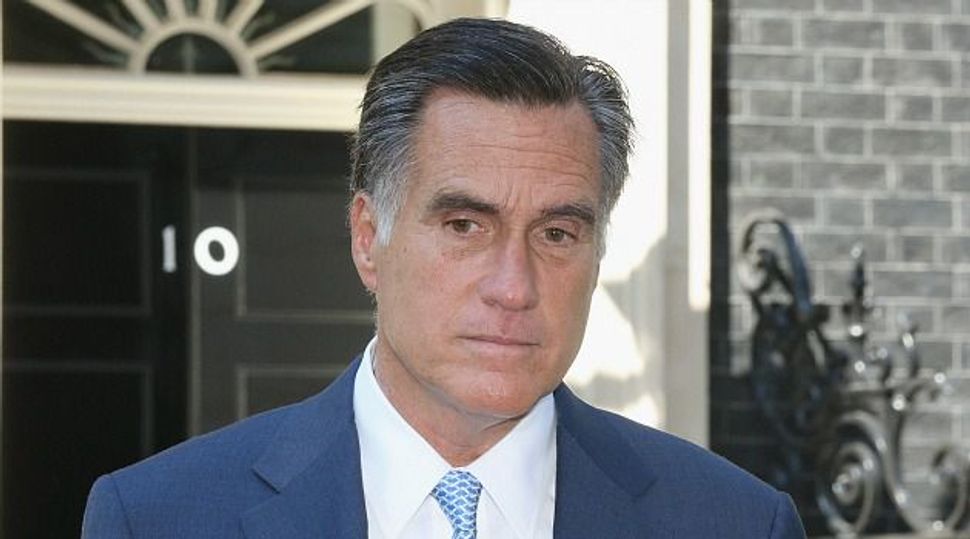 Mr. Smear: Mitt Romney?s at it again. He wants to put in voters? minds the idea that Barack Obama is something less than 100% American. Image by getty images

Obama the Foreigner: It began back in January, and sure enough, here it is again. This is Romney in January, celebrating his New Hampshire primary win: “This president takes his inspiration from the capitals of Europe; we look to the cities and small towns of America.” And, “I want you to remember when our White House reflected the best of who we are, not the worst of what Europe has become.” And, more recently, the idea comes up almost daily. Here’s Romney campaigning in Irwin, Pa., on July 17: “[Obama] is trying to take work out of welfare requirement. It is changing the nature of America…. In the past, people of both parties understood that encouraging achievement, encouraging success, encouraging people to lift themselves as high as they can, encouraging entrepreneurs, celebrating success instead of attacking it and denigrating, makes America strong. That’s the right course for this country. His course is extraordinarily foreign.”

Obama as alien is a trope with legs and with purpose. It plays deftly into lingering suspicions that our president, with his Kenyan father, his childhood in Indonesia and his disconcerting middle name, is not a real American — exactly the point John Sununu, a surrogate for Romney, made just the other day: “I wish this president would learn how to be an American.” That one was so outrageous that Sununu walked it back later in the day. But it is of a piece with a determined effort by the Romney campaign to paint Obama as The Other, a man not only inadequate to the task, but inappropriate as well. It smells of racism but, deftly avoiding any explicit reference to Obama’s race, offers instead Obama’s fundamental alienness.

Racist? There’s no need to go that far. Instead, consider the inversion Obama-as-alien represents: It seeks to pre-empt Romney’s own principal vulnerability — to wit, that he, Romney, is himself an outsider. His great wealth and his Mormonism, in themselves unremarkable, take on a different hue when we learn of his Swiss bank account, his investments in the Cayman Islands, his stubbornly secret tax returns, his mysterious departure from Bain Capital, all wrapped in an air of privileged entitlement. Here’s Bill Clinton the other day, commenting on the tax return issue: “With everyone else being so much more forthcoming, it raises the question of whether he thinks it should be a different set of rules for him and everybody else.”

And then all the other things that set him apart — taking a tax deduction the size of a living wage in dressage expenses (which are perhaps an important form of therapy for Ann Romney, but a horse of a very different color for most Americans), building an elevator for his cars and making various gaffes along the way about how he wears his wealth: having NASCAR owners as friends, his wife’s “couple of Cadillacs,” and on and on. One looks at him not, as he supposes, with envy, but with puzzlement. Who is this man?

His principal appeal? He’s not Obama. The polls consistently report greater enthusiasm for Obama’s personal qualities than for Romney’s. Gallup finds that Obama’s the more “likable” by 17 points. And in June Pew found that on the question of which candidate better “connects with ordinary Americans,” Obama has a 31 point advantage (59% to 28%). And while 89% of Obama voters believe that Obama connects with ordinary Americans, only 54% of Romney voters say that of their candidate.

This is not meant as a prediction of the outcome of the November election. It’s still early. Quite apart from all the major external events that may affect the race, we have yet to see what happens at the conventions, to hear the debates, to learn how much difference the vast resources of the new super PACs — some $800 million backing Romney (including a pledge of $400 million from the Koch brothers) as against roughly $100 million supporting Obama — will make.

This is about the perniciousness of Othering. We will be electing an American president, whoever wins. We will be choosing between two extravagantly different and quite spectacular American success stories and, far more important, between two radically different views of the role of government in our lives. Ladies and gentlemen: Can we please talk about that?

Stoking Fears of ‘Other’ Obama