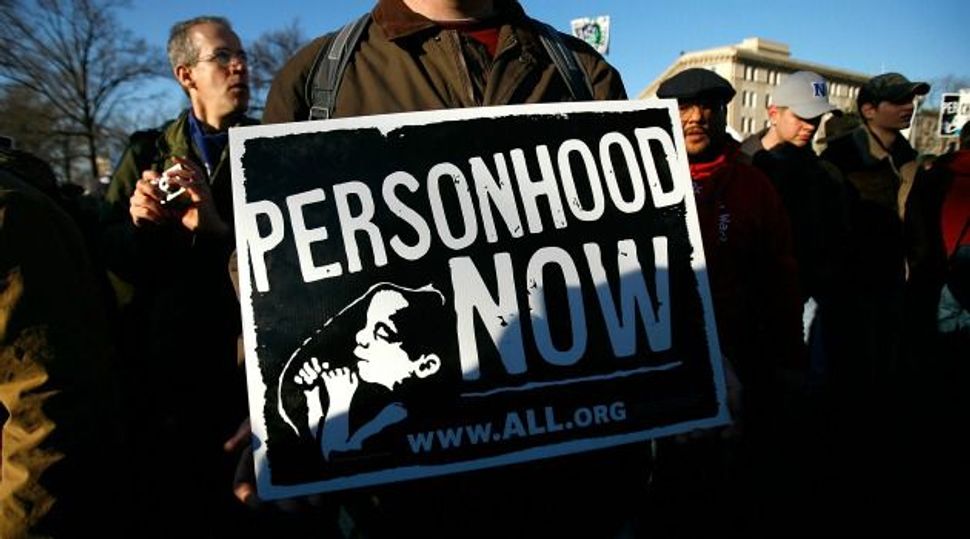 Personhood and You: By expanding the meaning of ?personhood,? activists may wind up weakening the rights of real people. Image by getty images

If you’re discouraged by the nasty, vapid tone of this year’s presidential politics, you might want to take a fresh look at our states and counties, where hand-to-hand battles are being fought over a critical issue of real substance: Who (or what) is a person?

Most of us think we know the answer intuitively. A person is a two-legged being that can laugh, imagine the future and cut you off on the freeway. And, in certain cases, howl at 3:00 a.m. for a fresh diaper.

But today’s America is about nothing if not stretching boundaries. When it comes to personhood, we’re stretching in two directions. At the front end, efforts are under way to confer personhood status on fertilized ova, those tiny bits of existing persons that fuse in the fallopian tube, permitting possible uterine attachment and, with luck, eventual emergence as a new biped.

At the back end, we’re talking about groups of actual persons who open a joint bank account and register in Delaware.

After simmering near the margins of political discourse for decades, these two redefinitions have lately burst onto center-stage. At least 16 states and a handful of counties and other jurisdictions, as well as the U.S. Supreme Court, have considered measures over the past year to redraw one or the other of those boundaries. Results have been mixed.

There are differences between the two campaigns, of course. For one, corporate personhood is already the law of the land, and has been for two centuries. The current struggles pit conservatives who want to expand the rights of corporate “persons” against liberals who want to narrow or end them. The other sort of personhood — let’s call it fallopian personhood — is not yet recognized in law anywhere. The legal battles to win recognition represent the cutting edge of the religious conservative war against abortion.

Measures to recognize fallopian personhood surfaced in 16 states this year, mostly as bills in legislatures or as signature-gathering campaigns for ballot initiatives. None has succeeded yet, but a few came close. New Hampshire’s bill was approved by both chambers before being vetoed by the governor. Bills in three states passed in one chamber but stalled in the other. Three others are still moving through legislatures, including in Mississippi, where voters rejected it as a ballot initiative last fall.

As for state ballot initiatives, four failed to collect enough signatures. Three are still under way, including Colorado, where voters previously rejected it twice. Finally, Georgia has an initiative on the July 30 GOP primary ballot, calling on legislators to amend the state constitution so that the rights of every “human being” are protected from their “earliest biological beginning,” meaning from fertilization. (Even the state’s two Catholic bishops are opposed; they say it’s morally sound but unconstitutional.)

One initiative that will appear on the ballot this fall is a corporate personhood measure in Montana. Voters will decide whether to instruct the state’s congressional delegation to support a constitutional amendment declaring that corporations are not persons. This comes in response to a 5–4 U.S. Supreme Court ruling this past June, overturning a century-old Montana law that barred corporate funding in state elections.

Local efforts for a corporations-aren’t-persons amendment are gathering signatures in rural counties in New York and California. In Chicago, the city council is considering a resolution calling for an amendment.

Corporate personhood won’t be easy to undo. It was first recognized way back in 1819 by the U.S. Supreme Court, which ruled that corporations had the same rights as individuals to enter and enforce contracts, to sue and be sued. The idea was to secure the corporation’s standing as a business entity.

Logic gave way to mischief in 1888, when the justices ruled that since corporations were persons, they were entitled to the “equal protection of the laws” guaranteed by the 14th Amendment, ratified in 1868 to protect freed slaves. “All persons born or naturalized in the United States” were entitled under the amendment to the full “privileges” and “immunities” of citizenship, including protection of their “life, liberty or property.” It’s never been clear how a corporation could be considered “born or naturalized,” but this was the Gilded Age of Andrew Carnegie and J.P. Morgan, and money made anything possible.

Congress moved in 1907, during the Progressive Era, to outlaw corporate spending in federal election campaigns. But that ended with the dawn of the new Gilded Era, when the high court ruled in 1978 that banning corporations’ campaign spending violated their freedom of speech. Being “persons,” it seems, doesn’t just enable corporations to enter and enforce contracts, which was the original point of the fiction. It gives them basic human rights.

But there’s a catch. While corporations enjoy the same rights and freedoms as us flesh-and-blood slobs — free speech, property rights, due process, presumption of innocence, freedom from illegal search and seizure — they don’t share our accountability. If you or I get caught robbing a widow, we’ll likely go to jail. A corporation can’t. Sometimes its officers can be indicted, but they’re just as likely to act like 7-year-olds and blame their invisible friends Goldman and Sachs.

So much for the differences between the two personhood campaigns. What about their similarities? Well, it might not be instantly apparent, but each redefinition of personhood stretches the meaning of human rights outward to cover new types of beings — bits of people at one end, clusters of people at the other. Less obvious, redefinition works like Silly Putty: Pulling the coverage toward the edges weakens the middle, where actual living, breathing persons are left less protected, less autonomous and less free.