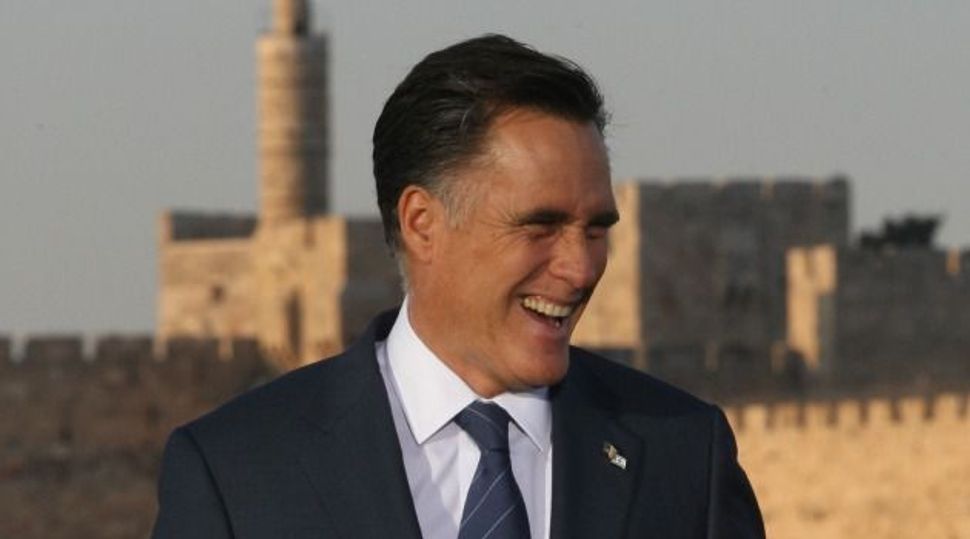 For people used to presidential candidate visits to Israel, Mitt Romney’s was a short, strange trip. Missing were the carefully scripted visits to high-profile places like Yad Vashem and Sederot. And though he did get a photo-op at the Western Wall, it wasn’t planned in advance. Press coverage was strictly controlled and interviews were minimal. Compared with candidate Barack Obama’s visit in 2008, this was a low-key affair.

What was going on?

Probably no American election has seen the global Jewish people more divided. Although President Obama’s popularity among Israelis has somewhat recovered after a disastrous first two years, it is nowhere near the approval levels that American Jews show for the President. Part of that is due to the different cultural and political traditions that have emerged in the last sixty years — Israelis tend to feel more threatened by Arab might than by the American right. Part of it has been Obama’s effervescent disdain for the Jewish State’s elected leaders, who are not really beloved by many American Jews either.

And in the wake of Israel’s strategic and economic rise over the last generation, coupled with American Jews’ relative economic and spiritual insecurity, we can understand why American Jews feel less of an urgency than ever before to choose their presidents based on what’s good for Israel.

But there’s something else in play here, a new demographic on the Israeli scene, a kind of natural selection if you will. For it turns out that American Jews who fall into many of the classic Republican categories (capitalist, religious, muscularly Zionist) are disproportionately a lot more likely to make their first or second homes in Israel than those who don’t. A community of wealthy American ex-pats (“olim by choice,” they are now called) has grown dramatically in the last decade, especially in places like Jerusalem, Raanana, Beit Shemesh, and Gush Etzion. But do not call them foreigners: They may send their kids to the Israeli military, but they continue to vote in U.S. elections, build their wealth in dollars, and pay U.S. taxes.

Collectively these ex-pats have a very large amount of money, in the tens of billions or more, and because they are in Israel but care deeply about America, they are willing to spend their capital to help influence their distant love — just as many American Jews pour money into influencing Israel. Absence plus passion plus wealth equals philanthropy.

The result is that we have here a large pool of potential funding for the Republican nearly-nominee. I’m not just talking about individual Israel-loving gazillionaires who make seven- or eight-figure gifts to super PACs. I’m talking dozens of “ordinary” millionaire types who really want to see Romney in Jerusalem — and in the White House — and were happy to pay $50,000 per plate for a 7:45 am event on a Monday morning to make sure he gets there.

So the dynamic of Romney’s visit in 2012 was naturally very different from that of candidate Barack Obama in 2008. For a Democrat, the challenge is always to prove to liberal American Jews that you are every bit as supportive of Israel as is the Republican. For a Republican, the goal is to raise money from American Jews who either live in Israel or wish they did.

Obviously I’m overstating. Democrats, too can raise money in Israel; Republicans, too, want to garner support of Israel-supporting voters in swing states like Ohio and Florida. The point is, however, that if Romney’s visit seemed unusual, it was because his aims were, on balance, less symbolic and more practical—less about publicity and more about fundraising. I have often carped about how American Jews view Israel as a set for their own inner movies, rather than as a real country. But for Romney, Israel is not a movie set at all: Like London, it’s become an actual power hub, a genuine source of support for his campaign.

And this, my friends, is an astonishing thought.

The most important story in all of this, in other words, isn’t about Mitt Romney at all. It’s about Israel. It is, in fact, a powerful sign of Israel’s remarkable rising global profile.

Of course, some people will bristle at the thought of the pristine kibbutz of their dreams turning into a coffer for presumptive Republican leaders. Others will be too attached to the image of Israel as forever fighting a losing battle for survival to believe that its profile is rising in any respect.

But at least one part of the Zionist dream is being fulfilled before our eyes: It was not long ago that our president, Shimon Peres, envisioned Israel becoming a financial center for the world, like Hong Kong or Singapore. (It was he who, as finance minister a decade before Benjamin Netanyahu came to power, ushered Israel into the capitalist era.) And it was the capitalist Theodor Herzl who, a century ago, imagined a magnet for wealthy Jews in Palestine. Today we see potential leaders of the free world turning to Israel for support.

If Israel really has become a capitol of capital, we all have cause to rejoice. Unless, of course, you see Romney’s fall as being more urgent than Israel’s rise.

David Hazony is a Contributing Editor at the Forward who lives in Jerusalem. His first book, The Ten Commandments: How Our Most Ancient Moral Text Can Renew Modern Life (Scribner) was a finalist for the National Jewish Book Award.