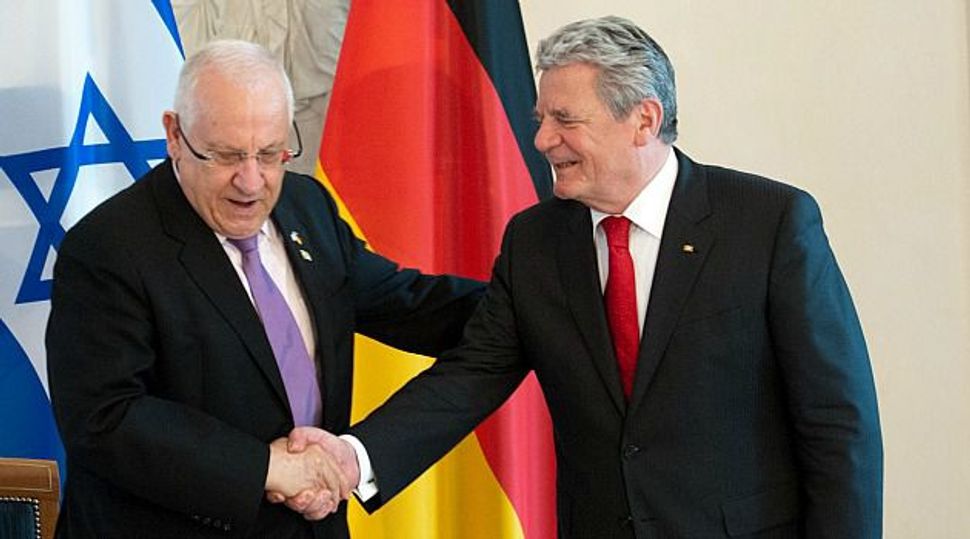 Cuts Both Ways: Knesset speaker Reuven Rivlin rightly brought up the issue of circumcision with his German counterparts. What about religious freedom in Israel? Image by getty images

I am the son of a Yekke. My father was born in Germany. His parents escaped to Palestine in the nick of time, just before World War II broke out. Both were doctors, but they came with no Hebrew and there was no work for them. It was tough. They may have left Germany behind them, but not the precision of their German ways. Before she would utter a word, my grandmother would think about it. I thought of her as I observed the speaker of our Knesset during his recent visit in Germany.

Reuven “Rubi” Rivlin is a distinguished lawyer and legislator. When he met with his counterpart, Norbert Lammert, president of the Bundestag, he chose, correctly, to bring up a matter that required the urgent attention of Germany’s legislators. The previous week, a district judge had ruled that circumcision was a “serious and illegal intervention in the bodily integrity of the child.” Rivlin did the right thing when he raised this important issue with his German colleague. Circumcision is not only a mitzvah, a commandment, but also a symbol with a powerful historic memory.

Our Knesset speaker has a strong historic consciousness. He is also a classic humanist. When you listen to the speech he makes each year at the ceremony that marks the final chords of Memorial Day and signals the beginning of Independence Day celebrations, you cannot fail to see what an unqualified democrat he is. He could have presented numerous arguments to his German colleague supporting the urgent need to legally establish the right of people to circumcise their children.

Instead, he went directly to the heart of the matter, saying: “This is a real interference in matters touching on freedom of religion and the freedom to practice religious rites. From the democratic perspective, saying that a person cannot observe their religious practices and beliefs goes against any constitution, no matter where it was written.”

Rivlin was correct. Germany is home to about 4 million Muslims and 150,000 Jews. These two populations practice circumcision as part of their religious beliefs. If Germany outlaws circumcision, it would be an attack on the religious freedom of these people.

I do not know what Lammert said in reply behind closed doors, but in my imagination I can hear him say, after searching for the proper diplomatic formulation and considering his words carefully (after all, he is German): “Wait a minute. I appreciate your democratic approach very much and agree wholeheartedly, but tell me, do you practice what you preach? Do you practice freedom of religion as strictly as you would like us to do?”

Perhaps he asked this question because someone whispered to him that in Israel — how can we put this delicately — there is no freedom of religion for Jews. Perhaps he knows that for Jews, the only legally recognized marriages are those performed by the official State Orthodox Rabbinate; that thousands each year either cannot be married by the rabbinate or refuse to do so; that the State of Israel tells them that if they want to get married, they should go to Cyprus, at their own expense, because the marriage ceremony, conducted by a municipal official in Larnaca, will be recognized by the State of Israel, but a wedding performed by a Masorti (Conservative) or Reform rabbi will not be recognized.

And goodness knows what else the president of the Bundestag has been told. Let us hope that no one informed him about how converts are treated in Israel, or that women get detained by police for the “crime” of wearing a tallit in public.

Speaker Rivlin, be true to your words. What upsets you in Germany should bother you in Israel, as well. Next time you receive a mission of Jewish leaders from the United States, most of them Conservative and Reform Jews, and they speak to you about the terrible abuse of religious freedom in Israel, think about your conversation with the president of the Bundestag. In Israel there are more Masorti and Reform Jews than there are Jews living in Germany, Jews on whose behalf you spoke out so correctly regarding the right to practice circumcision. You need to speak on their behalf, too.

Yizhar Hess is the executive director and CEO of the Masorti movement.