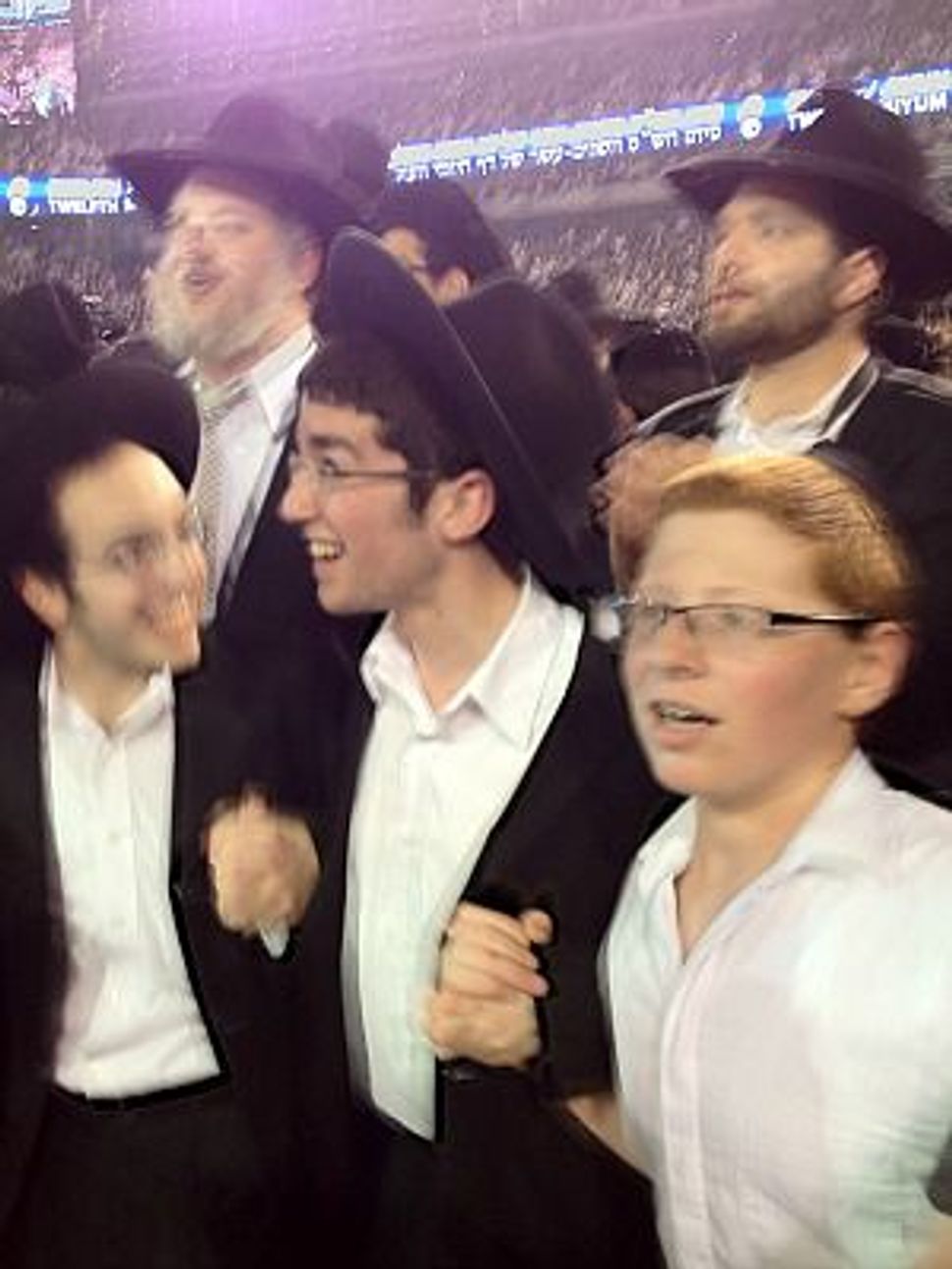 Despite rain and traffic jams, the mood was jubilant at MetLife stadium on August 1, as some 90,000 Orthodox Jews gathered to celebrate the completion of the study of the Talmud, or Siyum HaShas.

A massive crowd of mostly ultra-Orthodox men in dark suits and hats packed the East Rutherford, N.J., football stadium, spilling out onto concourses, escalators and parking lots. Several thousand women also attended, seated on the upper level behind a specially constructed, $250,000 divider made of green plastic that remained open for much of the evening.

“It was inspiring,” said Yossi Gelber, an accountant from Queens who has participated off and on in the page-a-day Talmud regimen, or Daf Yomi, since 1990. “How often do you get to [pray] with 90,000 people?”

“I came to have an imprint in my mind and to be part of something wonderful,” added Pnina Fenig, a speech therapist and Toronto native now living on Manhattan’s Upper West Side.

The event, which began at 7:30 pm and lasted until after midnight, marked the 12th completion of the 2,711-page cycle that begins anew every seven-and-a-half years. The daily study system was initiated in 1923 in Vienna, at the first congress of Agudath Israel, by Rabbi Meir Shapiro.

While this year’s event marked the largest such gathering to date, celebrations were held in previous years at venues such as Madison Square Garden, Continental Airlines Arena and Nassau Coliseum.

For this year’s Siyum stadium facilities were adapted to serve the needs of Orthodox attendees, with prayer services scrolling across television screens, the field covered to accommodate extra seating and concession stands stocked with kosher pastries instead of hot dogs and chicken tenders. Most of the participants interviewed by the Forward were impressed by the event’s organization, although some felt that the speeches, and the evening in general, went on too long.

Speakers at the Siyum included rabbinic leaders of the American ultra-Orthodox community, as well as visiting dignitaries such as Rabbi Yisrael Meir Lau, formerly the Ashkenazi chief rabbi of Israel and currently the chief rabbi of Tel Aviv. The speeches focused on strengthening Jewish unity, commitment to Talmud study and the revival of Orthodox Jewish life after the Holocaust.

“The promise and premise of the Daf Yomi is achdus Klal Yisroel,” or unity of the Jewish people said Elly Kleinman in the evening’s introductory remarks. Later in the program Lau added: “Daf HaYomi makes us one family…. Not only in friendship but in brotherhood.”

The evening also featured performances by singers Abish Brodt, Shloimie Daskal and cantor Yitzchok Meir Helfgott. After the last page was completed the packed stadium erupted in singing and dancing, as far as space would allow.

Many of the attendees at the Siyum were themselves finishing the Talmud, but some came just to enjoy and be inspired by the gathering. “I didn’t finish it, but it’s an awesome achievement,” said Dovid Reich, a 33-year-old real estate manager from the Midwood neighborhood of Brooklyn. “It’s powerful to see 90,000 people, no matter what.”

Michael Rollhaus, a manufacturer of restaurant furniture from Kew Gardens Hills, Queens, is a devotee of Daf Yomi and finished the cycle early, last April. “I had no idea that I was going to finish Shas,” he said. “It’s like a snowball. You start a masechta [tractate] and never know what the next page is going to be about. There’s so many things there you never would learn otherwise.”

Rollhaus, who also serves as a guest host on Israel Sports Radio, said that he will be participating in another Siyum in Jerusalem on Sunday, during a trip there next week.

Many of the evening’s speakers encouraged participants who had not studied Daf Yomi to begin doing so. “Everyone should resolve to learn a daf [page] a day together with all Klal Yisroel,” said Rabbi Yitzhak Scheiner, head if the Kaminetz yeshiva in Jerusalem. For participants such as Reich, that proved to be the evening’s takeaway message. “It went to the heart of the issue, that people should make a commitment to finish it, to do it every day,” he said. “I definitely want to.”