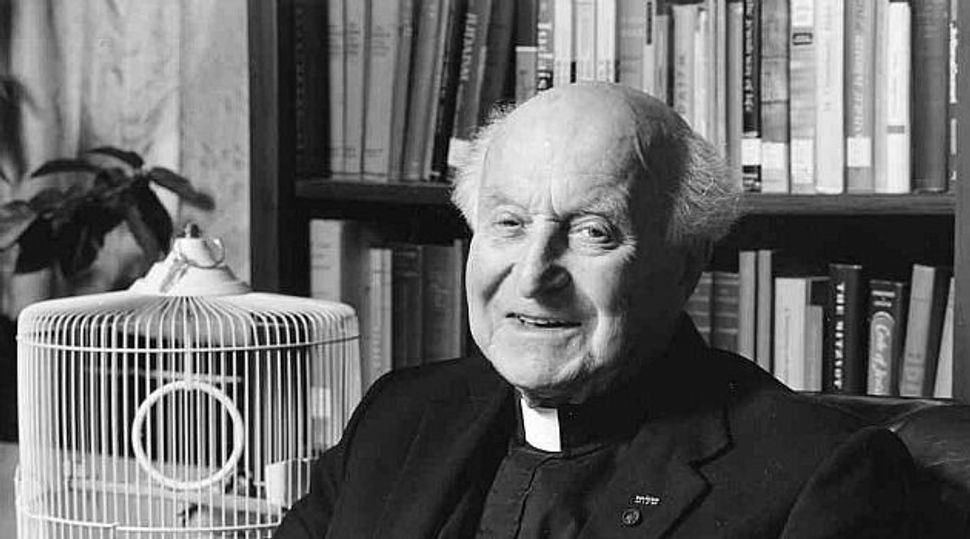 Hero of Tolerance: Msgr. John M. Oesterreicher blazed a trail of tolerance for Jews that is now a permanent part of the Roman Catholic Church?s teachings. Image by courtesy of seton hall university

I teach my classes at Seton Hall University in a seminar room known as the Oesterreicher Suite, in which a photograph of Monsignor John M. Oesterreicher looks down on the class as it is being held. The room itself is comprised of glass cases with speeches and documents that track and illustrate the Monsignor’s path from Catholic convert of Jewish origin, encouraging others to follow his path of conversion to a commitment to change the Church’s attitude toward the Jews.

In the 1930s, Monsignor Oesterreicher lived in Germany and belonged to the Freiberg Circle, which opposed anti-Semitism and sought a non-racist approach toward Judaism. After World War II, he founded an institute for the then-oxymoronic concept Judeo-Christian studies and was an editor for The Bridge, a 1950s journal which allowed Catholic authors to develop positive approaches toward Judaism. These efforts bore fruit as the 1961 publication, “Decree on the Jews” to which Oesterreicher was the major contributor. It took four years of ecumenical work to produce a fourth draft of the original document, which became known as Nostra Aetate.

John Connelly, a renowned University of California historian, recently wrote an excellent work, From Enemy to Brother: The Revolution in Catholic Teaching on the Jews, showing the important role that Jewish and Protestant converts to Catholicism played in the creation of Nosta Aetate.

Is this a revelation? The answer is no, as all the pieces were known. Oesterreicher ’s Jewish roots and his role are well known to those involved in interfaith encounter. Connelly put the material together in a new way with less emphasis on other figures and greater emphasis on the converts.

Connelly’s new book focuses on Oesterreicher’s role, as well as Karl Theme and Dietrich von Hildebrand, who both converted from Protestantism. It should be noted that the Frieberg circle also included non-converts who directly opposed the Nazi regime such as the German Economic Minister Franz Bohm and the historian, Gerhard Ritter.

In this quest, Karl Theme pushed forward and was in dialogue with the German Jewish thinkers Buber, Adorno, and Schoeps. Oesterreicher dragged his feet in this endeavor and in discussion with Theme still envisioned a conversion of the Jews.

Oesterreicher is remembered by many Jews with ambivalence as a 1960s defender of the Catholic Church. Now, in this new reading, Connelly agrees with the charitable approaches toward Oesterreicher as the 1960s a mouthpiece for the progressive words and ideas of Karl Theme, which he used in the drafts leading to Nosta Aetate. Connelly also shows the importance of the Jewish thinkers such as A. J. Heschel and Ernst Ehrlich for their influence on Cardinal Bea.

Will this lead to new conspiracy theories focusing on the prominent role attributed to Jewish-born theologians? Until this book was published, most of the many online conspiracy theories blamed the French Jewish historian, Jules Isaac, who in 1947, laid the need for a change before the Church. The conspiracy theorists also blame the B’nai B’rith as Freemasons and the American Jewish Committee as maliciously manipulating the situation.

The conspiracy theorists will never go away, it is just that now, they may just transfer their theories to the converts to Catholicism. One might also ask: will it lead to new anti-Semitism? No, to give a similar answer as before: none of this is new material. More importantly, most Catholics have already accepted the full gamut of changes of Vatican II, most are young enough to have never known another Church.

The actual start of this process was the 1947 meeting in Seelingberg, Germany by both Protestants and Catholics who thought that after the Holocaust, Christianity must relinquish its teaching of contempt toward Jews. It took a half century of hard work for most Christian denominations to change their attitude toward the Jews.

The reception of Connolly’s book shows that many Jews are still not aware of the message of Nostae Aetate. The document was part of a much larger series of documents of Vatican II, none of which dealt with Jews, that brought the Church into the 20th century. Nosta Aetate states that there is a bond that ties the people of the “New Covenant” (Christians) to “Abraham’s Stock” (Jews). It acknowledges that Israel received the revelation first, that Jews remain dear to God, and that Christianity grew out of Judaism. It rejects the deicide charges and decries all displays of anti-Semitism made at any time by anyone.

One must remember that prior to this document, Jews were seen by some documents as blinded, the Devil, and false; and that once the Jews have served their purpose then God has forgotten them. Jesus had transcended and had nothing in common with his birth religion, according to this now-outdated view.

It took more than three decades for Pope John Paul II to acknowledge Judaism as a living religion with an eternal covenant, to recognize the Holocaust, and to actively acknowledge the state of Israel. Pope Benedict XVI has moved the religions closer in Catholic thought by teaching that Jews and Catholics share one common Abrahamic covenant based on Genesis 15. Additionally, Pope Benedict strongly rejects the idea of two separate but equal covenants. Situating Jesus in his Jewish context is now taken as obvious.

Nostae Aetate was a revolution. But it did not in itself offer pluralism, recognize Judaism as a separate religion or, even as John Paul II did, grant continuous validity to Judaism. The document has both progressive and conservative interpretations.

Current Catholic questions and dividing lines of progressive and conservative interpretations have to do with how the Jewish covenant functions, how are Jews saved, and how the Trinity works through the Jewish people. These debates are not about Jewish self-understanding , rather Catholic doctrine.. For those interested in the official Vatican thinking about Judaism, I would recommend the document “Building on ‘Nostra Aetate’—50 Years of Christian-Jewish Dialogue,” by Cardinal Kurt Koch and issued May16, 2012; it contains Pope Benedict’s definitive legacy on Judaism. (http://www.ccjr.us/dialogika-resources/documents-and-statements/roman-catholic/kurt-cardinal-koch/1116-koch2012may16)

As for the subject of Connelly’s new book, the author considers the fragile, contingent, and almost accidental nature of this change. As someone who works in a Catholic university with a seminary on campus, this change is permanent. It is necessary, and part of the self-definition of the Catholic mission.

Seton Hall University will be commemorating in 2013-2014 the 50th anniversary of John M. Oesterreicher’s Judeo-Christian Institute. There will be speakers, a conference, and translations of Oesterreicher’s early work.

Alan Brill, is the Cooperman/Ross Endowed Professor in honor of Sister Rose Thering at Seton Hall University. He is the author of Judaism and Other Religions and the recent Judaism and World Religions.