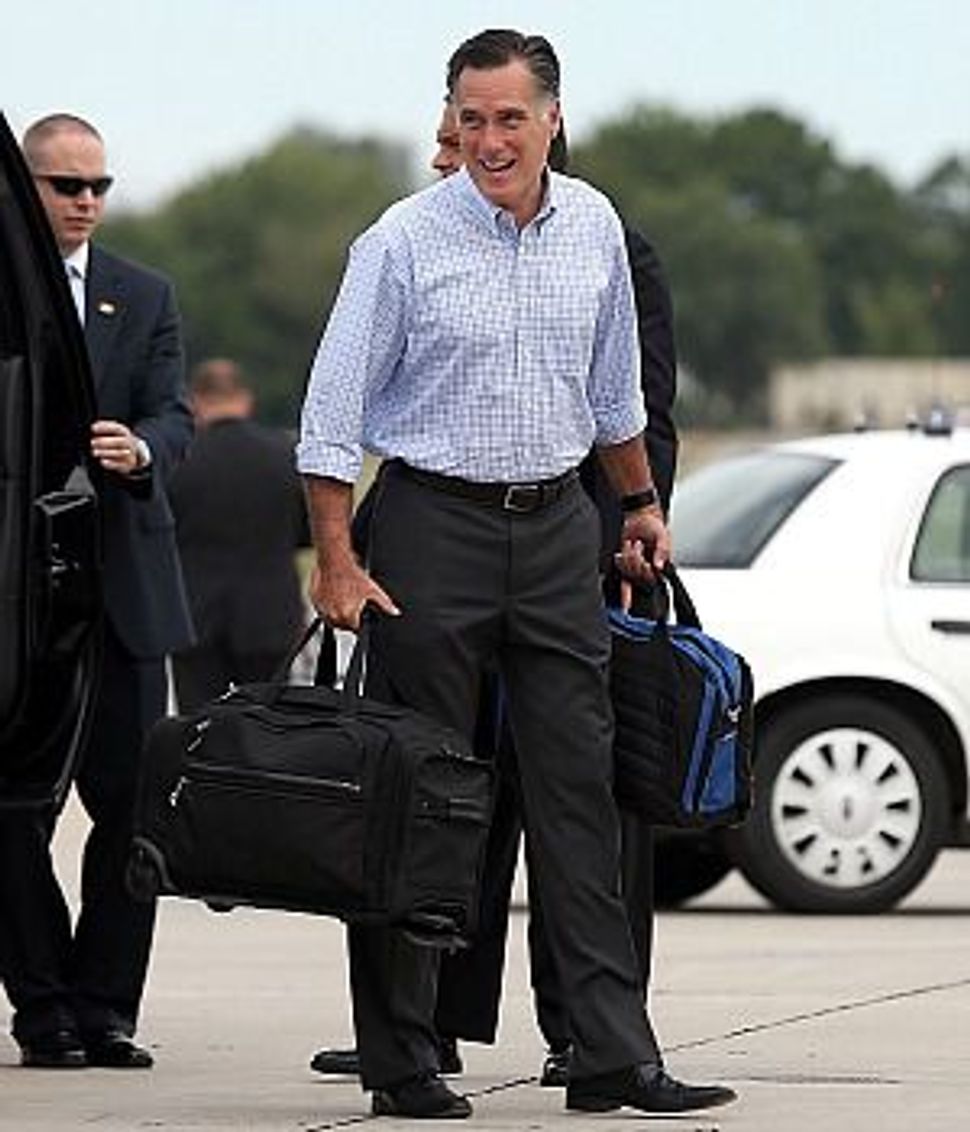 Sometimes a candidate doesn’t have to chase after the Jewish vote. It chases him. That could be Mitt Romney’s conclusion from an unusual set of events he experienced in New Jersey today.

Speeding from Newark Airport to Lake Terrace, N.J., Romney’s motorcade crossed paths with a Jewish Orthodox wedding party, posing for photos with the bride and groom.

The ride was already harrowing for all concerned, according to a pool reporters account.

“Hitting speeds of up to 90 mph at times, the motorcade made what had been scheduled as a 61-minute drive in roughly 45 minutes on a route that took us along the Jersey Turnpike to the Garden State Parkway and prompted your pooler to wonder many times if she would live to cover Romney’s remarks at the fundraiser tonight.”

Things were going to get even curioser. In the words of the pool reporter: “some unusual things happened.”

“First, the motorcade passed a man dressed in American flag shorts running down the street toward the venue here while waving an American flag.

“Whooooo!” he exclaimed, as your pooler’s van passed.

Then the motorcade found itself in the midst of the Jewish wedding party, which, as any Jew can attest, is not necessarily a good place to be.

“Immediately, the family abandoned the bride and groom and began chasing Romney’s car in the parking lot, waving cameras. The candidate’s SUV drove around a corner to a back entrance, followed by at least 10 members of the wedding party who tried to run up to Romney’s car [but] were halted first, by a wood fence, which one man tried to scale, and then by Secret Service agents, who did not look pleased.

“Oh you’re Secret Service,” one woman said, as she was asked by an agent to move back. “We just want to see Romney.”

Associated Press photos from the event show the excited wedding crowd in the parking lot and a bewildered bride and groom trying to figure out what happened to all the guests.

Romney’s spokesman said that the presidential candidate planned to stop and pose for photos with the happy couple. But those snaps haven’t hit the mainstream media yet.