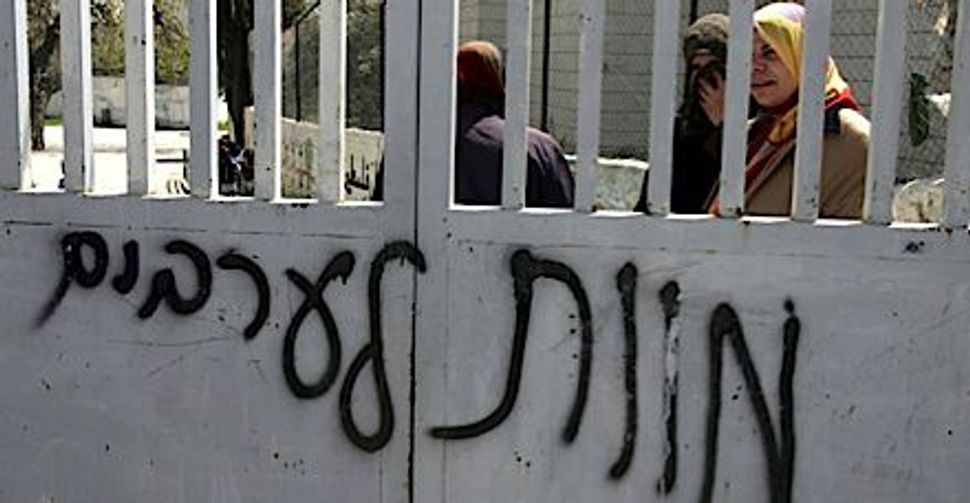 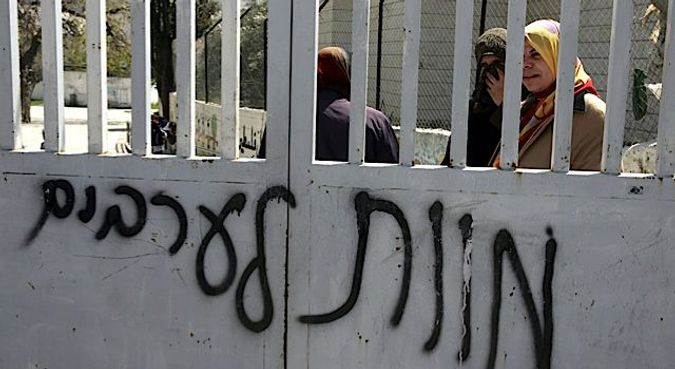 Obscenity: A gate in Hebron on which settlers have painted the Hebrew words, ?Death to Arabs? in 2005. Image by Getty Images

On August 17, a mob of several dozen Israeli Jewish teenagers — some reports say as many as 50 — assaulted four Palestinian youths in the center of Jerusalem in an attack that the Jerusalem police have labeled an attempted “lynching.” The young people shouted “death to Arabs” as they chased down and beat the Palestinians. One of the four victims remains in critical condition after being resuscitated.

Some of the alleged perpetrators have already been arrested. As the indictments and trials proceed, it is likely that a story will emerge of a few “bad apples” who don’t represent Jewish youth as a whole. But this incident holds up a mirror to the faces of those of us who consider ourselves part of the global Jewish community.

Over the past few years, we have become accustomed to “Price Tag attacks” — violence or vandalism carried out by settlers, primarily against Palestinians, as retribution for Israeli government policies perceived to threaten the settlement enterprise. It can be easy to write off these incidents as the work of a few radical settlers who do not represent the Israeli populace, and certainly do not represent the American Jewish community.

But this assault was different. It took place in Zion Square, in the heart of downtown Jerusalem, where every tourist to the city has stopped to eat a falafel or to browse displays of tallitot and goofy T-shirts. According to some eyewitnesses, as many as 100 people — presumably ordinary Jerusalemites and tourists — watched without lifting a finger to stop the violence. This attack was also not a one-time event. It comes just a few months after a group of Beitar soccer fans, mostly teenagers, stormed the Malha Mall — the major mall in Jerusalem — yelling racist epithets and attacking Arab workers and shoppers.

What does this have to do with American Jews? A century ago, the lynching of Leo Frank, a Southern Jewish businessman, forced the American Jewish community to face the reality of anti-Semitism and to take a more public role in combating bigotry. The lynchings of African Americans, from the Civil War through the Civil Rights Era, galvanized many young American Jews to join freedom rides and marches. In both of these cases, the Jewish community recognized that lynchings are not the work of a few “bad apples,” but rather reflect deeper undercurrents of racism and violence in the broader society.

The worldwide Jewish community complains often about anti-Semitism within Palestinian communities. And we are right to do so. It is frightening and infuriating to see old anti-Semitic tropes re-emerge in the context of contemporary political struggles. The Palestinians have their own unfortunate culture of violence that has produced brutal attacks against Jews.

But we also have to take a hard look at how we ourselves talk about Palestinians. Within the Jewish community, I regularly hear descriptions of Palestinians as a group that would be condemned as virulent anti-Semitism if one were to substitute the word “Jew.” I hear questions about whether they love their children. I have seen offensive caricatures of Palestinians hanging in synagogues. I often hear dismissals of Palestinian identity claims and casual disregard for their history. I have heard racist jokes told by rabbis and other Jewish leaders. No wonder some children have gotten the memo that hatred toward Palestinians and Arabs is acceptable.

This is not a simple question of politics. Reasonable people may disagree about what the solution to the Israeli-Palestinian conflict should be, where lines should be drawn and how peace negotiations should be carried out. But dehumanizing the other side has no place in even the most heated political debates.

Some commentators have suggested that the riot in Jerusalem may presage a new wave of terrorist acts carried out by Jews. I hope this prediction is wrong. But as a rabbi, I am not willing to leave to chance whether our children — in which category I include young Jews in Israel or in the Diaspora — translate racist talk into violence.

We are entering the month of Elul, the reflective season that leads up to Rosh Hashanah. There could be no more appropriate time to consider how hateful speech, even when couched in the context of a political conversation, can condone violence.

Famously, Jews confess in the plural. When we pray the vidui — the confessional prayer recited on Yom Kippur and in the Selichot period, before Rosh Hashanah — we ask forgiveness not only for our own sins, but also for the sins of the entire community. This gesture acknowledges that we can never entirely wash our hands of other people’s misdeeds as long as we contribute to maintaining a world that tolerates such behavior.

I was not in Zion Square when this horrendous incident occurred. As far as I know, I have no direct relationship to any of the rioters. And yet, I feel responsibility for what happened. I feel responsibility because I, as a rabbi, could do more to ensure that hateful language, let alone violence, has no place in the Jewish community. American Jews can start by making clear within our own communities as well as to Israel that we will not tolerate racist talk, and certainly not lynchings reminiscent of the darkest periods of American history.

In the next few days, we are likely to read descriptions of the perpetrators of last week’s attack as disturbed or easily persuaded teenagers. We will hear condemnation of violence from all sides. But real teshuvah, repentance, will come only when we ensure that our everyday language does not teach our children to hate.

Rabbi Jill Jacobs is the executive director of Rabbis for Human Rights — North America. Her most recent book is “Where Justice Dwells: A Hands-on Guide to Doing Social Justice in Your Jewish Community” (Jewish Lights Publishing, 2011).