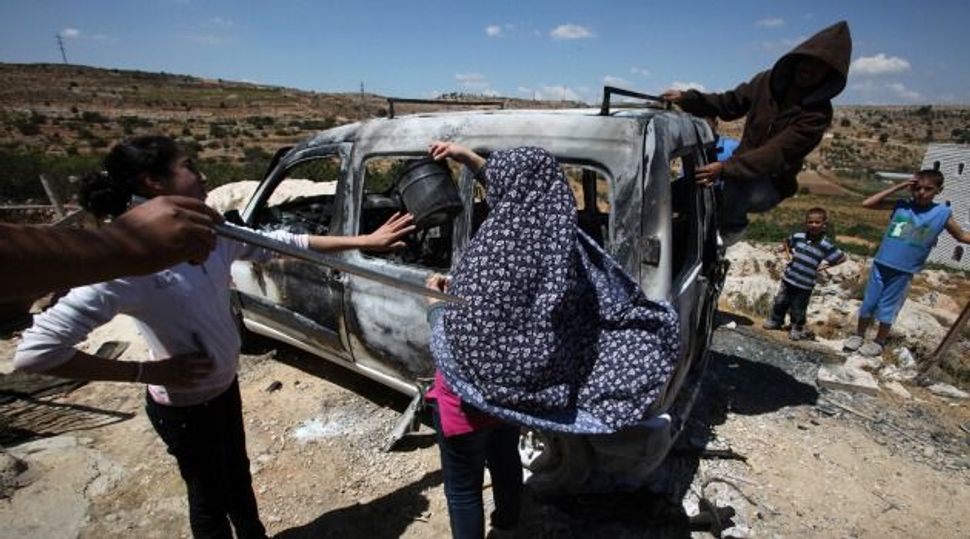 Unseen Damage: The damage done by attacks on Palestinians are clear as day. The hurt inflicted on Israel?s soul by the settlers? actions is harder to see. Image by getty image

It is tempting to impute retroactive intentionality to yesterday’s events. As Gershom Gorenberg felicitously puts it, we mistakenly assume “that if things turned out a certain way, someone planned it that way.” Looking back now, it may seem a foregone conclusion that Israel’s settlement policy in the West Bank (and in Golan, too) was from the beginning an evil design, intended to encroach on Palestinian rights rather than to solve immediate problems. But the effort to draw a straight line of intentionality from then to now obscures more than it clarifies.

No, instead of a straight line, imagine a zig and a zag and then another, only gradually gathering momentum, straightening into a tendency and then a trend and then — and then, now.

The history is dense and tedious. There are no better sources than Gorenberg’s own “The Accidental Empire: Israel and the Birth of the Settlements, 1967–1977” and his “The Unmaking of Israel”; in both, the tedium is minimal, the surprises startling. Curiously, the very first settlement, Kibbutz Merom HaGolan, established just five weeks after the June 1967 war, was in the Golan Heights. It was followed by Kfar Etzion, the first West Bank settlement, in September 1967. But in those first 10 years, up to the shift in power to Menachim Begin’s government in 1977, only nine settlements were established, whereas in 1977 alone, 16 new settlements were founded —and in the four years after that, another 20.

Little will here be served by reviewing the miserable history of those years, the raids and the reprisals that followed the stunning visit of Anwar Sadat to Jerusalem and his address to the Knesset in March 1978. Two events stand out: the letter of 348 Reserve soldiers to Prime Minister Begin, heralding the birth of Peace Now and leading, less than four years later, to the unprecedented mass rally demanding a full accounting of Israel’s role in the massacre at Sabra and Shatila. At some point during that period, a new slogan emerged: Hakibush mashchit — The occupation corrupts.

And so, plainly, it does. But so what? However inadvertent the origins, the poison fruit is today fully ripe. To understand that, it is not sufficient to call attention to the horrific attack in Zion Square the other night, the attack by a mob that threatened the life of Jamal Julani, or even to add to it the firebombing hours earlier of a taxi near Gush Etzion in which six Palestinians, two of them children, were wounded.

I know, of course I know, that Jewish Israelis have also suffered, and grievously. If keeping score’s your thing, go for it. Just now, it’s not my thing. My thing: Is anyone listening?

Here and there, yes. Official Israel is, for the moment, outraged. But this will pass — and who recalls and connects these to the mosque burnings, the olive tree uprootings, the endless harassment? Who recalls the studied indifference of the authorities, or, worse yet, their complicity?

Wait: Suddenly good news, as reported just now by Reuters: “Israeli police arrested three Jewish settler boys suspected of throwing a firebomb at a Palestinian vehicle in the West Bank that injured six people, a spokesman said on Sunday. The suspects, aged 12 to 13, from Bat Ayin, a settlement in the occupied West Bank, will appear in court later on Sunday to be remanded into custody, said police spokesman Micky Rosenfeld. Four of the passengers wounded in the August 16 attack were members of the same family, two of them children. Israeli Prime Minister Benjamin Netanyahu denounced the attack soon after it happened.”

Case closed, but for the Reuters coda: “Palestinians and Israeli human rights groups say that settlers are rarely prosecuted in cases of violence against Palestinians in the West Bank.”

Case closed, save for the age of the perpetrators.

Case closed, save that these underage children are from a settlement in the West Bank, which means it was them, not us. Is no one listening?