Untangling the Oxymoron of the Secular Jew 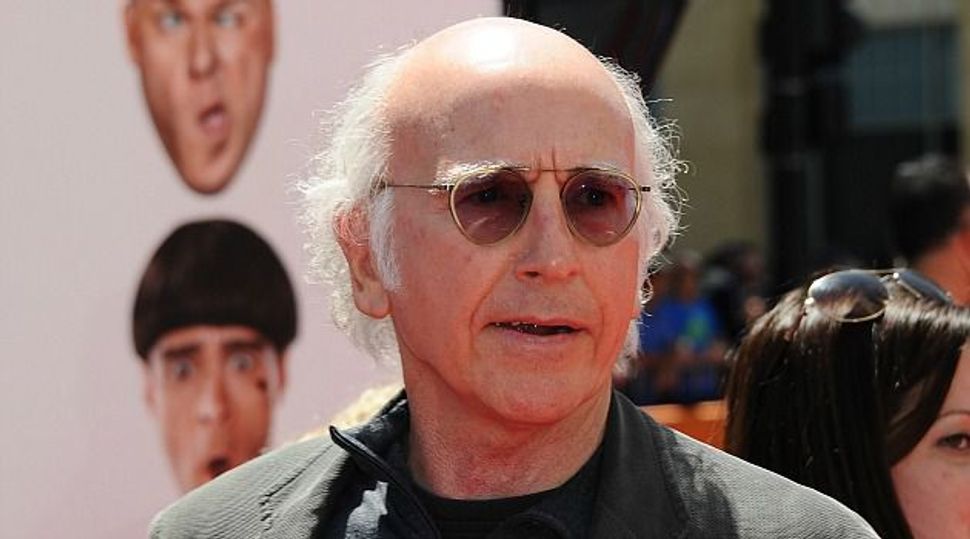 Model Jew: The term ?secular? is as closely tied to Jews as ?crotchety? is to Larry David. What exactly do we mean by it? Image by getty images

‘Secular” is to “Jew” as “holy” is to “Torah,” as “noisy” is to “grogger,” as “crotchety” is to “Larry David.” Which is another way of saying that this coupling of adjective and noun sounds logical, natural and familiar. Could the same be said of a shiduch on the order of “secular Southern Baptist,” or “secular Muslim”?

Many Jews, for their part, have adopted the adjective with verve. Consider that there exists a small but vibrant religious denomination colloquially known as Secular Humanistic Judaism. Consider that the 2001 American Jewish Identity Survey discovered that a robust 44% of American Jews by birth described themselves as “secular” or “somewhat secular.”

That figure, astonishingly, was twice as high as the one tallied by Buddhists, the nation’s second most secular faith. One of the demographers who worked on that study, Ariela Keysar, recently noted that the number vaulted up to 64% when the categories were jiggered a bit. Members of the Tribe, for better or for worse, are the most secular-friendly religious group in America!

Somewhat problematically, this groundbreaking AJIS study never actually defined the term “secular.” Which leads us to wonder: What exactly do its respondents, and American Jews in general, think the s-word connotes? Having just completed a book about the rise and fall of American secularism, permit me to hazard a few guesses.

My hunch is that most Jews understand the adjective in three distinct, though sometimes overlapping, senses. The first is nonbelief and skepticism. Thus Jewish atheists and agnostics, whether they are affiliated with a denomination or not, tend to refer to themselves as secular. This is not the place to indulge in a history of Jewish atheism, though my own research leads me to believe that its initial appearance as a coherent and collective phenomenon can be traced to the post-Marxist ferment of late 19th-century Europe.

Next, many Jews may think of the word as a stand-in for religious moderation. To put it more bluntly, they conceive of secular Judaism as non-Orthodox Judaism. That ambiguous latter designation leaves an awful lot of theological terrain to inhabit. This moderate Jew could be one who does not adhere to the laws of kashrut but attends synagogue regularly; one who is intermarried and self-identifies as Jewish; one who hasn’t set foot inside a synagogue in the quarter-century since her bat mitzvah, or one who thinks of himself as a “cultural Jew,” among countless other possibilities.

This brings us to a third category, which, historically speaking anyhow, lies closest to the term’s deep roots in Christian political philosophy. Here the secular Jewish American is a person who displays a thoroughgoing skepticism about any and all entanglements between Church and State.

In so doing, she or he ratifies a precious intuition articulated by Protestant thinkers like Martin Luther, Roger Williams, John Locke, Thomas Jefferson and James Madison. All these diverse figures understood that any coupling of religion and government tends to be catastrophic for either or both. Jews, with their centuries of infelicitous experiences in Christian and Islamic host societies, need not be persuaded of the truth of this proposition.

With each passing decade of the 20th century, American Jews gravitated to a variant of the secular worldview, known as “separationism.” From the days of Franklin Roosevelt to the end of the millennium, the vast, overwhelming number of Jews in this country were committed separationists. For them, this form of disestablishmentarianism emerged as something like the 614th commandment of their faith. “The Jews,” a 1966 Commentary article lamented, “are probably more devoted than anyone else in America to the separation of Church and State.”

Indeed, the rise of separationist secularism in the mid-20th century is almost unthinkable without their contributions. Wherever a public school prayer was deemed unconstitutional, or wherever a governmental institution was de-Christianized, one could find Jews. Organizations such as the Anti-Defamation League, the American Jewish Committee and especially the American Jewish Congress secured groundbreaking victories in the high courts.

Among the occupations, Jewish public school teachers (and their powerful unions), journalists, physicians, academics, entertainers and even pornographers all had obvious, guild-specific interests in opposing any manifest or tacit form of Christian establishment. And then there were the individual movers and shakers of the separationist vision. Most notable here was Leo Pfeffer — a combination of a jurist, a scholar and a master strategist. His arguments in front of the United States Supreme Court shaped the separationist vision for decades to come. As he wrote in one of his many studies of the subject, “Complete separation of church and state is best for church and best for state, and secures freedom for both.”

Yet one need not look any further than our three branches of government to understand that Pfeffer’s insight has lost traction. The legal moorings of separationism have been undermined at least since Judge William Rehnquist’s dissent in the 1985 Wallace v. Jaffree case. No fewer than four justices on today’s court would seem to concur with Rehnquist’s demurral that the wall of separation “is a metaphor based on bad history” and “should be frankly and explicitly abandoned.” For some contemporary court watchers, it’s not a matter of if the wall collapses, but when.

The legislative chamber, for its part, is teeming with conservative Evangelicals who speak openly about America being a “Christian nation.” In fact, the Republican Party itself — as the primary perorations of candidates like Rick Santorum, Newt Gingrich, Rick Perry and Michele Bachmann made clear — seems hell-bent on dismantling the wall, brick by brick.

As for the executive branch, a Democratic President has presided over the supersizing of George W. Bush’s Office of Faith-based and Community Initiatives. Although comparatively restrained, Barack Obama invokes Christ in his rhetoric in ways that would have made John F. Kennedy and midcentury Jewish separationists despair.

As goes America, so go the Jews. Secular Judaism itself (no matter how you define it) is experiencing its own moment of despair. Whereas more than half the Jews in this country feel comfortable calling themselves secular, my guess is that the number would have been much higher a few decades ago.

Two factors account for this change. The first is the political and demographic recrudescence of Jewish ultra-Orthodoxy in the United States and Israel. As far as the ultra-Orthodox are concerned, if Jews are going to worship any wall, it’ll be the Kotel in Jerusalem. That these same groups actively seek government funding for their yeshivas represents a complete inversion of the midcentury Jewish separationist vision.

The second factor is the graying and soon-to-come passing of that vibrant, incandescent 20th-century generation of secular Jews. Fewer and fewer public school teachers are of the Mosaic persuasion. The American Jewish Congress was Madoff-ed into oblivion. The other AJC and the ADL are still concerned with the First Amendment, though their missions have drifted toward other pressing issues. The vaunted secular-Jewish intelligentsia, be it composed of journalists, professors or even pornographers, is much smaller, less brash and less influential than it once was. Larry David, after all, is pushing 66. Philip Roth celebrates his 80th birthday next March.

Yet: Scads of Jewish-Americans are comfortable referring to themselves as secular. No group in America has given as much to — and benefited as much from — that old Protestant vision/suspicion of religious establishment. And no group, I would wager, could play such a pivotal role in that vision/suspicion’s revival.

Jacques Berlinerblau is an associate professor at Georgetown University and author of “How to Be Secular: A Call to Arms for Religious Freedom” (Houghton Mifflin Harcourt, 2012).

Untangling the Oxymoron of the Secular Jew