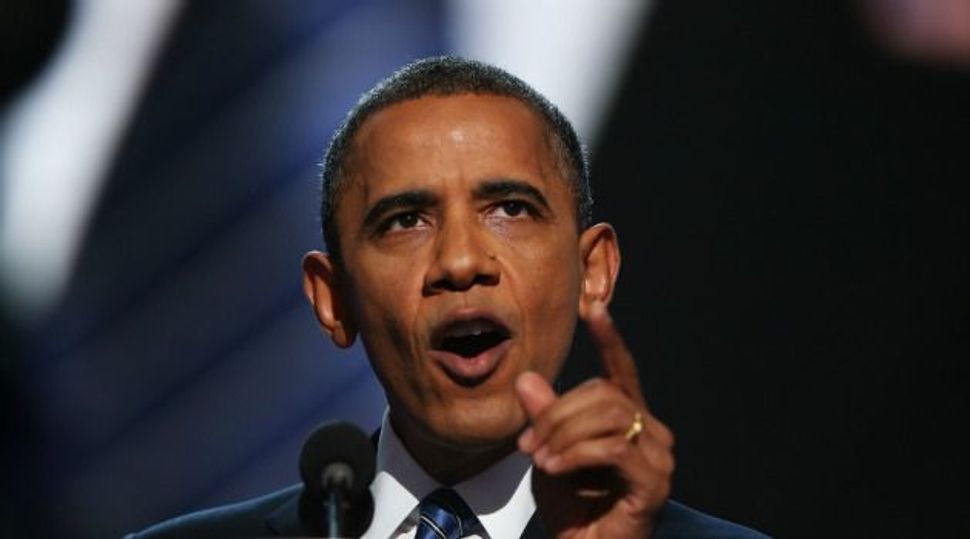 Jerusalem, Remember Me? What did we learn from the Democrats platform debacle. A lot, but not what you think. Image by getty images

In a few days we’ll celebrate one of the emotional peaks in the Jewish calendar, the twice-yearly proclamation that ends the Yom Kippur fast and Passover feast: Next year in Jerusalem.

We won’t mean it literally. For most it’s a metaphorical prayer for a better world, expressing faith that history has direction and meaning, with heavenly Jerusalem its symbolic end-point. But it’s also a literal affirmation of devotion to the earthly Jerusalem.

Speaking of the Democratic platform, let’s pause to ponder the mysterious disappearance and resurrection of Jerusalem in that political document. How did it get left out? Conservatives said it reflected President Obama’s supposed coolness toward Israel, coupled with declining sympathy in the Democratic base. Party spokesmen insist it was just an oversight.

Antipathy or oversight? Neither holds water. If the Democrats dislike Israel, what explains the rest of the platform? It pledges “unshakeable commitment to Israel’s security” and “identity as a Jewish and democratic state,” salutes America’s and Israel’s “shared values,” vows “steadfast opposition to any attempt to delegitimize Israel on the world stage” and lots more. It’s virtually identical to the GOP platform. If that’s hostility, pour me a double.

On the other hand, “just an oversight”? As if. Are we supposed to believe nobody noticed the disappearance of three sentences from the 2008 platform about the world’s holiest, most contested city — in a party umbilically tied to the world’s largest Jewish community?

One platform committee member told me he heard two explanations from the document’s drafters. First, they wanted to avoid “predetermining” issues that are supposed to be decided in peace negotiations. The 2008 platform said Jerusalem “is and will remain the capital of Israel” and “will remain an undivided city.” But it also called the city “a matter for final-status negotiations.” It doesn’t make sense to leave it for negotiation and then dictate the outcome.

Second, it signaled “inclusiveness” toward Muslim and Arab-Americans. They totaled about 100 of the 5,551 delegates, but loomed larger as symbols of the party’s message of tolerance and diversity. What about Jewish feelings? The drafters apparently figured that since the missing text hadn’t made sense anyway, reasonable people wouldn’t miss it.

They figured wrong. Why? It appears the drafters were neither advocates for the two sides nor experienced politicos, but policy wonks. Jewish and Arab activists saw the text only afterward. Each assumed it had been vetted. It hadn’t. Once published, it was raw meat for Republicans. Democrats were then forced to restore the lost sentences in an embarrassing, dubious floor vote, infuriating their famously process-besotted base. Few dele gates objected to the amended wording. They had already approved a platform promising Israel far more. But they hated being told a 50-50 voice vote was a 2-to-1 majority. Dems hate bad arithmetic.

There are several lessons here. First, Jews still matter as a political constituency. Experts say Israel is mainly an evangelical Christian issue, that Jews are too few and divided to matter. Not so. The Christian right doesn’t figure in Democratic planning, yet Democrats scramble for Jewish backing. It’s simple math.

Second, Israel matters to Jewish voters. It’s true that surveys show only a fraction of Jews ranking Israel their top concern. When you ask their top three concerns, though, Israel looms large.

Third, Arab and Muslim Americans are emerging as a political constituency. Until now, pro-Israel activists could press Israel’s case without serious pushback. That’s wearing thin. In the coming era, American Middle East policy will have to be negotiated. The Charlotte convention was a taste of what’s ahead.

One more point, seldom discussed but critically important: American policy. The United States has never recognized Jerusalem as Israel’s capital. Neither have most other nations. Of 171 countries that ever had diplomatic relations with Israel, only 19 ever had embassies in Jerusalem. None do today.

The reason: Israel doesn’t have a formal eastern border. The 1947 United Nations partition plan envisioned a tiny Israel and set Jerusalem aside as an international city. Arab states rejected it and invaded, forcing Israel to fight for independence. Most nations accept the 1949 armistice line as a de facto border. But most still pay lip service to the legal fiction of a separate Jerusalem, pending a peace agreement.

Congress has urged successive administrations to recognize Jerusalem and move the American embassy there, but no president has ever done so and none is likely to, regardless of campaign platforms, until Israel signs a treaty defining its eastern border.

Pro-Israel activists often ask why Israel is the only country that’s not permitted to name its own capital. The answer: It’s the only country that names a city that no other country recognizes as within its sovereign territory. It should be and will be, speedily and in our day. But we’re not there yet.